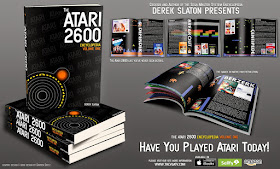 Gamers have been cataloguing the library since at least the early 1980s. This phenomenon kicked into overdrive during the video game fanzine explosion of the early 1990s and the proliferation of the Internet during the mid-1990s. Things got especially serious in 1996, when historian Leonard Herman self-published : A Directory of Software for the Atari 2600, a labor of love that describes every release in encyclopedia-style form.

Now, thanks to such platforms as Lulu and Amazon CreateSpace, self-publishing is easier than ever, resulting in such titles as Classic 80s Home Video Games Identification & Value Guide (2008) by Robert P. Wicker and Jason W. Brassard and The A-Z of the Atari 2600 (2013) by Justin Kyle. Works backed by professional publishers have hit the market as well, such as my own Classic Home Video Games: 1972-1984: A Complete Reference Guide, released by McFarland Publishers in 2007. 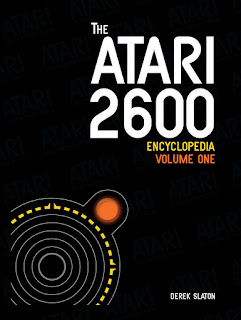 Enter Derek Slaton’s The Atari 2600 Encyclopedia Volume 1, the first of a proposed four-volume series. Slaton’s massive tome, which has the heft and binding of an oversized text book, is gorgeous at first glance. It has a tastefully designed, shiny black cover and is fully illustrated throughout in full color. Each game, from Activision Decathlon to Double Dragon, has a description/review with data (publisher, release date, etc.), complemented by such tasty visuals as box scans, screen shots, catalogue pages, cartridges, and manuals (though you might need a magnifying glass to read the interiors of said manuals).

Unfortunately, upon closer inspection, the paper and printing quality come up lacking. The book is generous in its use of colorful screenshots, but they would benefit from glossy paper, as would the rest of the images. I assume glossy paper would have made the book cost-prohibitive (it’s already $50 as is), so it’s hard to blame Slaton for wanting to keep the price down to an affordable level. There are cropping issues as well, as the text edges up too closely to the left side on several pages.

Speaking of the text, Slaton describes and reviews each game in a breezy, informal, readable style and oftentimes includes humor, which is a little odd for something called an “encyclopedia.” Slaton writes to entertain, which is fine, but there are times when he uses humor and vague information in place of detailed history, such as in the entry for , a.k.a. Pelé's Soccer. Instead of explaining that  was one of the first celebrities to endorse a video game, or that most previous soccer video games were  clones, Slaton writes that “there weren’t a lot of soccer video games on the market and Pelé really wanted to endorse something, or Atari drove up to Pelé’s front door with a dump truck full of cash.”

Each game catalogued in The Atari 2600 Encyclopedia Volume 1 is given four pages, which is more than enough room to include information about sequels, arcade originals, and the like, but much of this type of history is missing. For example, nowhere in the  review does it say anything about the cartridge being a clone of Exidy’s Circus (1977) arcade game. Worse, the  entry doesn’t mention Millipede (1982), the Centipede sequel that was ported to the Atari 2600 in 1984. Further, the  chapter doesn’t mention Stargate…well, you get the idea—the book simply needs more detailed information about each game.

Another problem with the book is that Slaton is repetitious in expressing his opinions. There’s an old joke about the movie reviewer who quit because he ran out of adjectives. It appears that the same thing has happened to Slaton. For example, he uses the word “solid” and the phrase “worth a look” way too much, sometimes in back-to-back reviews. In addition, he should have trimmed an adverb here and there, such as when he called Crackpots “very solid” and the graphics for Centipede “very underwhelming.” There’s no need for “very” in either case. 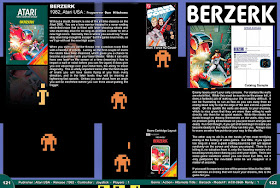 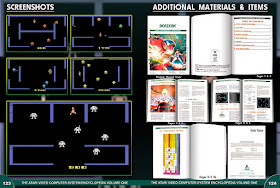 Along the bottom first two pages of each game entry, Slaton lists such data as publisher, release date, and genre. He also includes alternate titles. In his review of Dark Cavern, he says that the alternate title is Night Stalker, but he doesn’t explain that Dark Cavern was adapted from Night Stalker for the Intellivision. In the Astroblast entry, the book fails to mention that Astroblast was adapted from Astrosmash for the Intellivision.

On a more nitpicky note, Slaton ends the Custer’s Revenge (1982) chapter with: “While this is an absolutely terrible game in terms of content and gameplay, it must be played by everyone at least once. If for no other reason than to see the beginnings of controversy-causing video games.” While Custer’s Revenge did indeed raise a stink (as a pixelated General Custer, you rape an Indian woman), “controversy-causing video games” go back at least as far as Exidy’s Death Race (1976) arcade game, which was vilified on such programs as 60 Minutes and in such publications as The National Enquirer.

So far I’ve dwelt mostly on the negatives, but there are some things I like about the book, such as Slaton crediting obscure programmers for their work, such as Mike Schwartz, who developed Chase the Chuckwagon, and Robert Weatherby, who developed Chuck Norris Superkicks. Slaton also nails the appeal of certain games, such as the “mano-a-mano” action of Combat, which he correctly calls “one of the earliest death match games” (Midway’s Gun Fight predates Combat by two years, but the latter game is nevertheless an early example of the genre). And, yes, I did chuckle on occasion while reading the book.

Full disclosure: I’ve spoken with Derek Slaton in person several times—he’s a super nice guy with a sincere appreciation for playing classic video games, and for writing about classic video games (he’s also the author of The Sega Master System Encyclopedia). I truly wanted to love this book, especially when I saw the full color sample pages online. Unfortunately, it just doesn’t merit the $50 cover price, and the title is a little deceiving. I can live with the visuals, but there’s just not enough raw data and history, especially given the ample space given to each game.

If you decide to purchase the The Atari 2600 Encyclopedia Volume 1, skip the expensive hardcover version and download a digital copy—you’ll get more value for your hard-earned dollar.