Grading And Reviewing All 4 Donkey Kong Games for the Nintendo NES! 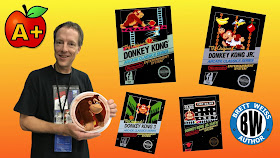 There were four Donkey Kong games for the Nintendo Entertainment System, aka the NES: Donkey Kong, Donkey Kong Jr., Donkey Kong 3, and Donkey Kong Jr. Math. In the years since, there have been homebrews and repros, but these were the four titles available when the console was new in stores. In a new video, I grade and review each game. You can watch it HERE.

On a related note, back in the late 1990s, I began writing for the late, lamented All Game Guide, a website whose mission was to write synopses and reviews for EVERY game ever published for every system. (Wow!) I was going through my archives and found this synopsis I wrote for the original arcade version of Donkey Kong: 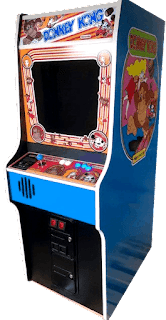 Mario, the Italian carpenter who would go on to become a plumber and Nintendo's mascot, makes his debut in Donkey Kong, a game of daring chivalry. Clad in red overalls and a matching cap, you as Mario (actually, he was Jumpman here, but he became Mario in subsequent games) must scale a building and rescue a blond damsel in distress.

As the game begins, a mean gorilla named Donkey Kong, also making his videogame debut, grabs the unnamed girl and takes her to the top of a structure consisting of six horizontal girders connected by ladders. He then jumps six times, damaging the girders until none are parallel to ground. Your job is to walk along the girders, climb the ladders, and make it to the top of the screen unscathed.

Donkey Kong will roll barrels down at you as you walk and climb. Some of the barrels will roll into an oil barrel that is positioned at the bottom of the playfield. This causes a fireball to appear. To avoid the fireballs and barrels, you can jump over them or hit them with one of the two hammers that are located within the structure.

After you reach your goal in what is oftentimes called the "Girders" screen, Donkey Kong will thwart your rescue attempt by simply taking the girl to a higher level, which is informally known as "Rivets."

The Rivets stage is comprised of six horizontal girders that are connected by ladders, but instead of striving to reach the top, you must pluck eight rivets out of the girders. There are two rivets located in each of the middle four girders. The barrels are absent, but fireballs appear from nowhere; once again there are two hammers you can use to ward off the enemies. To score extra points, you can pick up the girl's umbrella, hat and purse. After you have removed all the rivets, Kong will beat his chest and plummet to his seeming demise.

After you complete the Rivets screen, you must once again try your hand at the Girders stage. Then comes what some call "Elevators," a Girders-like stage that incorporates elevators and I-beams into the action. While barrels and fireballs are absent from this stage, the bouncing I-beams are invulnerable and just as deadly. Also, you can pick up the girl's scattered accessories for bonus points. After you reach the top, where the girl stands helpless, you must repeat the Girders screen and the Rivets Screen.

The seventh level introduces the fourth and final type of playfield, the Conveyor Belts (or Pie Factory, or Cement Factory). This five-platform screen once again has you running and climbing, trying to make it to the top of the playfield to rescue the object of your affection. The bottom platform is a girder, above which is a conveyor belt with pans of concrete which you must smash with a hammer or jump over.

The third platform from the bottom is a girder divided into three sections while the fourth is two pan-carrying conveyor belts separated by a barrel of burning oil. Once you reach the top girder, you still cannot claim the girl as your own; the various stages simply repeat themselves again and again until you lose all your lives (the myth of Sisyphus comes to mind).

Each screen in Donkey Kong has a bonus timer that counts down as you play. You must achieve your goal within the set amount of time or you will die. Other ways to die include making contact with a barrel, pan of concrete, or other lethal object (including the big gorilla himself), jumping off beams into a gap or open space, and hitting your head on the girder at the top of the elevator. You begin the game with three Marios and can gain one extra by achieving a certain number of points.