COVER REVEAL AND PRE-ORDER - The NES Omnibus: The Nintendo Entertainment System and Its Games, Volume 2 (M-Z)

BOOM - For all you Nintendo fans!

The NES Omnibus: The Nintendo Entertainment System and Its Games, Volume 2 (M-Z) 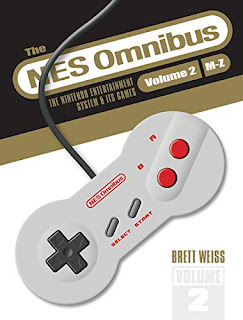 There will be a Kickstarter at some point, but if you'd rather do a standard pre-order for a SIGNED book, simply PayPal $65 to brettw105@sbcglobal.net (this includes shipping). US shipping only. Please include a note with payment that this is for NES Omnibus Volume 2 and how you would like the book signed.

This will reserve a spot for your name printed as an early backer in the book, and I'll include extras in your book shipment, such as signed bookmarks and trading cards. Maybe even a retro gaming poster! Direct book orders and pre-orders are a HUGE help in facilitating what I do. THANK YOU!

This book, like all my gaming books, has been a true labor of love. Video games have been a HUGE part of my life since I discovered them in 1975.

Volume 2 of the NES Omnibus is a fun and informative look at ALL the original Nintendo Entertainment System games released in the US starting with the letters M-Z. More than 360 games are featured, including such iconic titles as Metroid, Super Mario Bros., and Tetris, as well as such hidden gems and cult classics as Mighty Final Fight, Trog!, and River City Ransom. In addition to thorough gameplay descriptions, the book includes box art, screenshots, reviews, fun facts, historical data, memories from the author, vintage magazine ads and quotes, and, best of all, nostalgic stories about many of the games from programmers, authors, YouTube celebs, filmmakers, and other industry insiders. Contributing authors include "8-Bit" Eric, Chris "The Irate Gamer" Bores, and John "Gamester81" Lester, among many other noteworthy gamers. Includes a foreword by filmmaker Rob McCallum. Each game gets at least one full page of coverage in this gorgeous, massive, hardcover coffee table book. 424 pgs. 12x1x9.

U.S. residents can also click HERE to purchase the first book--The NES Omnibus Vol. 1--direct from me, and I'll send it right away. Thanks! 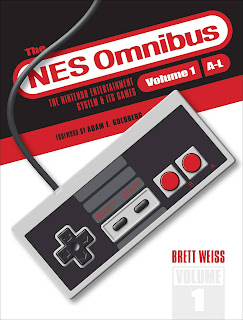