I had terrible news this week. Two publications I write for--The West Texan News and Living with Panache(both Star-Telegram supplements)--are being canceled. One bit of good news, though, came in the form of an emailed jpeg of the cover to my new book, which will be released this summer (or possibly early fall): 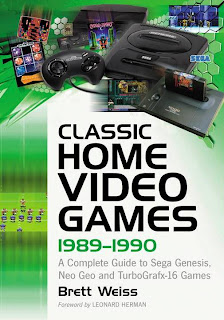 Publisher description of the book:

The third in a series about home video games, this detailed reference work features descriptions and reviews of every official U.S.-released game for the Neo Geo, Sega Genesis and TurboGrafx-16, the three of which, in 1989, ushered in the 16-bit era of gaming. Organized alphabetically by console brand, each chapter includes a description of the game system, followed by substantive entries for every game released for that console. The video game entries include extensive historical information, gameplay details, the author’s critique, and, when appropriate, comparisons to similar games. Appendices list and offer brief descriptions of all the games for the Atari Lynx and Game Boy, and catalogue and describe the add-ons to the consoles cited in this book--Neo Geo CD, Sega CD, Sega 32X and TurboGrafx-CD.
Posted by Brett at 3:39 PM