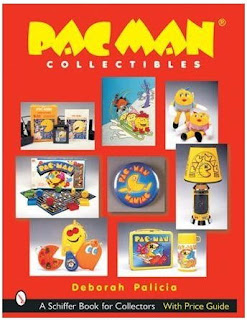 A good looking book that would make a nice addition to anyone’s game room library, Pac-Man Collectibles begins with an earnestly told and at times informative introduction. However, said intro does contain its fair share of shortcomings. For example, the book mentions that the arcade classic Pac-Man (1980) was created in Japan by a Namco designer, but it doesn’t refer to him by name (Tōru Iwatani).

Further, in a section called “The Creation of Pac-Man,” the author states that “The game is thought to be the first that did not center on fighting in video outer space but rather introduced the maze.” Wrong and wrong. A little rudimentary research will turn up numerous non-space games that predated Pac-Man (such as Midway’s Gun Fight and Atari Football), and Head On, a driving game released by Sega/Gremlin in 1979, featured a top-down maze in which players drove around tracks to clear dots from the screen.

Fortunately, the bulk of the book consists of pictures of merchandise featuring Pac-Man, Ms. Pac-Man, and their pals. There are 415 full color photos of various and sundry items, including puzzles, pinball games, party napkins, cereal boxes, glassware, records, candy, lap trays, a trash can, a lamp, animation cels (from the cartoon show), and much more. I remember seeing many of these items in stores back in the day, but there are quite a few I don’t recall, making for a nice blend of nostalgia and discovery.

Anyone with their finger on the pulse of 1980s pop culture will enjoy thumbing through this book. It was published in 2002, so some of the pricing is out of date, and the author admits there are many Pac-Man collectibles not pictured, but it’s a fun conversation piece and a good resource for collectors looking to add to their array of Pac-Man swag. Without this book, for example, the average collector probably wouldn’t know to look for Archie’s Double Digest #5 and the 24th Annual Hot Rod Show World Magazine, both of which feature Pac-Man covers.