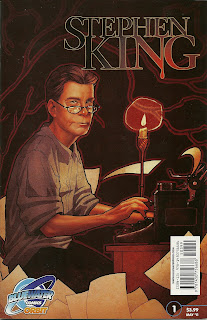 Orbit: Stephen King covers the well-known highlights (and lowlights) of the famous novelist’s life, such as how his father walked out on the family, how his wife, Tabatha, encouraged him to finish Carrie (his breakthrough novel), and how, in the summer of 1999, he was hit by a van and almost killed.

Indeed, the issue reads like a greatest hits (so to speak) of King’s biography, and it does so with dialogue, an omniscient narrator, and quotes from King’s non-fiction masterpiece, On Writing. Hardcore King collectors have heard these stories many times, but there may be a few surprises in store for casual fans, such as the fact that his first independently published story, “I Was a Teenage Grave Robber,” first appeared in 1965 in a fanzine called Comics Review (though it doesn’t mention that a young Marv Wolfman later published the story as “In a Half-World of Terror”).

Orbit has a stylish, cartoony look, but a more realistic take on the subject would’ve been preferable. Also, the text could use a little polish here and there. 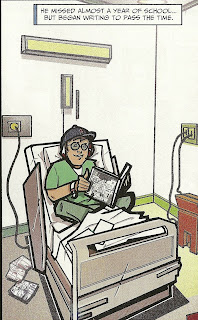