Moon Cresta for the Atari 7800

During the early 1980s, my brother and I hung out at The Land of Oz in the Northeast Mall in Hurst, Texas, which is a suburb of Fort Worth. I have fond memories of playing a shooter called  at that arcade, so I was stoked when AtariAge published a port of the game for the . Check out my review below, originally published in Video Game Trader. 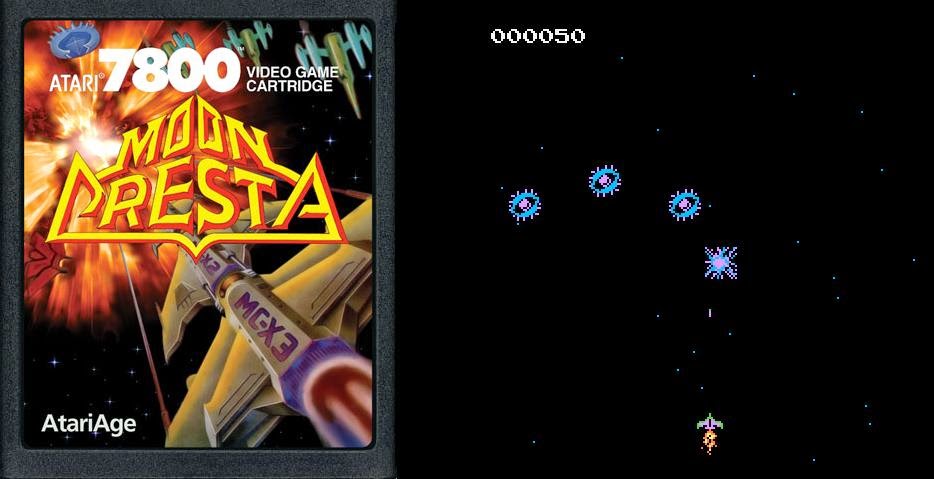 The original arcade version of , which Nichibutsu released in 1980, has the following attract mode readout:
TRIP TO THE SPACE WAR
MOON CRESTA
TRY IT NOW!!
YOU CAN GET A LOT
OF FUN AND THRILL

Then the game proceeds to list the top five scores, along with the players’ initials.

The Atari 7800 port lacks the aforementioned “Engrish,” but it offers something more important that, obviously, the coin-up lacks: the ability for players to select from three difficulty levels: Easy, Normal, and Hard.

While preparing to write this review, I never bothered playing Hard mode because Normal is plenty difficult. As you guide your ship horizontally along the bottom of the screen, firing bullets one at a time at waves of aliens (there are five alien types, each worth a different point value), they move in twisting, turning, circular patterns, often diving below your ship, only to swoop upward and crash into you. In addition, they sometimes fly down, kamikaze-like, straight for your ship. 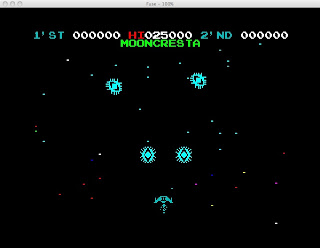 Easy mode is similar to Normal mode in terms of basic gameplay, but the aliens are slower and start off “unable to re-emerge under the player’s ship once they pass below it, reappearing at the center of the screen instead.” As with most classic games, the action does get tougher as the game wears on, so Easy mode does offer a challenge in due time.

In any of the modes, if you reach 30,000 points, you get a fresh stack of three ships, an accomplishment that is difficult in Normal mode.

“What is this about ‘stacked ships,’” I can hear those of you who have never played the game asking.

In Moon Cresta, you begin with three ships: I, II, and III. You begin controlling I, and it is small and fires one bullet at a time. If it gets hit, ship II appears. It is medium sized and fires bullets in side-by-side pairs. Ship III is large and also fires pairs of bullets.

“Again, what’s this business about stacking?” you insist.

Each round of play has 10 waves of aliens. After you destroy the first four waves, there’s an easy-to-execute docking sequence in which you guide your ship as it floats down to a ship in reserve below (assuming you have any ships left).

If you dock successfully, you get increased firepower, but you become a bigger target. The same thing happens after four more waves of aliens are eliminated. This gameplay mechanic isn’t the same as that found in a similar, but far more famous game, but it probably did pave the way for the doubling up of ships in Galaga (1981). Ships in Moon Cresta are stacked whereas those in Galaga are side-by-side. Speaking of Galaga, that game, with its rapid-fire shooting and dynamic gameplay, made similar games released before it—including Moon Cresta—seem dated to some degree.

Getting back to the fact that this homebrew is an arcade port, the original Moon Cresta had somewhat more vibrant colors and more robust sound effects (I only state it as a matter of record—this is nitpicking of the highest order), but that’s perfectly understandable given the nature of the hardware. The 7800 version is an excellent translation (only the most strident of arcade purists would scoff at it), giving console gamers a solid entry in the all-but-forgotten “slide-and-shoot” genre, which includes such greats as , Demon Attack, MegaMania, and Phoenix.

And, as those of us who enjoyed the game in the arcades and wished it would have been released for the Atari 2600, 5200, or ColecoVision back in the day well know, this is the first time Moon Cresta has been ported to a home console. So Kudos to AtariAge and programmer Bob Decrescenzo for making this happen.

One caveat: As with most homebrews, Moon Cresta, retailing for $50 (with professionally produced cartridge, manual, and box), is expensive. For those modern gamers accustomed to paying just a few dollars more for the latest entry in the “Assassin’s Creed” or “Call of Duty” series, you may find Moon Cresta to be a bit on the shallow side. However, for a few minutes of old-school fun every now and again, it’s a blast.

Bottom line:  is a great port of a good arcade game.
Posted by Brett at 4:59 AM

This game was too hard to spend a quarter on when it came out. I would only play it if it was the only game sitting outside of a KMart type store.
Having it at home with arcade-accurate movement and reset make it that, "one more time" kind of goodness!
Eventually boxed games are offered as cart only.

Thank you for the kind review - I try very hard to make my arcade translations as close as possible.

This is one of the few Moon Cresta home adaptations and I love it!!! This alone makes buying a 7800 console worth it. Great work Bob! You made a lot of retro gamers deliriously happy and excited like a kid again.

Another great game on my wish list is Phoenix by Taito! I hope you can also do this one in the future. Right now there's only a poor PSP version, the primitive (but endearing) 2600 version and the MAME (challenging or inconvenient to play on the big screen).