(this article originally appeared in a recent issue of AntiqueWeek) 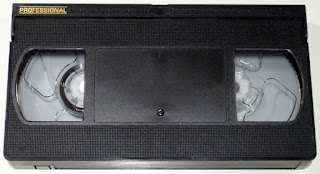 Walk into most any thrift store and you’ll see piles and piles of VHS videos for 50 cents or a dollar apiece. Some places even sell them four or five for a dollar. If you ask nicely, certain businesses would probably just give them to you. 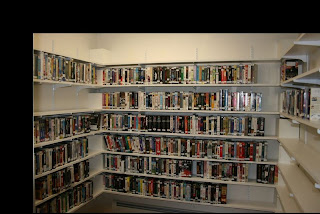 Short for Video Home System, the VHS format, which debuted in the late 1970s and became ubiquitous during the 1980s, has been dead for years, thanks in large part to the proliferation of the DVD (Digital Versatile Disc), which was invented in 1995 and introduced to the American consumer in 1997. Unlike the clunky and fragile VHS video, the DVD disc is slick, compact, and durable (video tape has the potential for wearing out much more quickly than the disc).

Moreover, the DVD has superior picture quality and sound, and most DVDs have special features, such as alternate languages, trailers, commentary tracks, and/or documentaries. Many DVDs offer interactivity as well, such as games and trivia.

In 2006, the even higher quality Blu-ray disc was introduced, putting the VHS video further in the rearview mirror.

Video tapes may be long extinct—the last major release to be issued on VHS was David Cronenberg's A History of Violence in 2005—but don’t tell that to Dan Kinem, co-director (with Levi Dabeedo) of a new documentary called Adjust Your Tracking: The Untold Story of the VHS Collector. 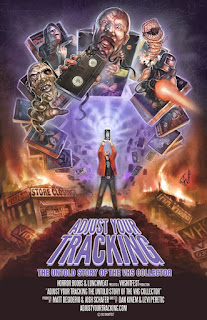 Kinem, who calls DVDs nothing more than a “disposable, flimsy, and convenient way to watch a movie,” loves VHS because of the many obscure titles that were produced. “You can find so many movies and TV shows that have not made the jump to DVD,” he said in a recent interview published on www.frank151.com. “That was my main draw to VHS from the beginning. I was able to watch tons of stuff that never made the jump to any digital format.”

During the filming of Adjust Your Tracking, Kinem and company interviewed more than 100 collectors, including Blood Slaughter Massacre (2011) director Manny Serrano. In the documentary, Serrano is shown waxing eloquent about the tangibility of VHS as he rattles and shakes a tape: “It has sound, it has weight,” he said. “You could kill somebody with this.”

Tony Timpone, editor of Fangoria magazine from 1985-2010, was also interviewed for the film. He remembers what it was like when VHS was the latest and greatest in home movie technology. “It was always a bit of a thrill to pop one of these VHSs into your machine and see a film you couldn’t see anywhere else,” he said.

As with many other collecting endeavors, the thrill of the chase is a big part of the appeal of acquiring VHS tapes. “As I got deeper and deeper into the collecting world I fell in love with the hunting aspect of it,” Kinem said. “I could travel and dig through thrift stores, video stores, and flea markets [looking] for rare and interesting movies that I didn't have.”

VHS copies of movies and TV shows that have never appeared on DVD, or that are out of print, can command hundreds of dollars on eBay. Hard-to-find exploitative and low budget horror films are especially sought after. A recent search of completed auctions turned up the following: 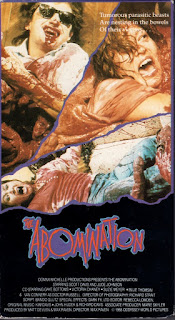 Collectability notwithstanding, most movie watchers prefer the quality of the DVD. This includes Lloyd Kaufman of Troma Entertainment, an independent film production and distribution company. “I personally don’t care for VHS,” he said. “The DVD is infinitely better because you’ve got the commentary tracks, and you get the history. I just got the full collection of Laurel and Hardy, and it’s terrific because yet get all sorts of history”

But if the movie or TV show in question has never been released on DVD (or in any other digital format), you may have to stick with a good old fashioned VHS tape—you might even find a copy for 50 cents or a dollar. Better yet, someone may give it to you.
Posted by Brett at 9:08 AM