In addition to working on the next volume in my Classic Home Video Games series, I've completed a book for Schiffer Publishing covering the greatest console video games released from 1977-1987. The working title is The 100 Greatest Console Video Games: 1977-1987. (You can see that I need a long nap after working on the book, which took more than a year to write, including more 12- and 16-hour days than I care to remember.) 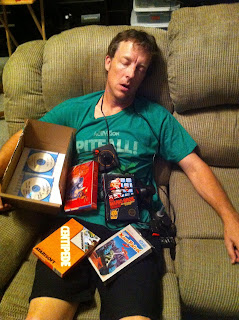 The book, which is scheduled for release sometime next year, will include, obviously, games for the Atari 2600, on up through some of the early titles for the NES. Cartridges for the Atari 5200, ColecoVision, Intellivision, Odyssey2, Sega Master System, and Atari 7800 will also be included, along with various dark horse entries.

The 100 Greatest Console Video Games: 1977-1987 features anecdotes, collector pricing, publishing histories, extensive gameplay details, tips and tricks, fun facts, my opinions on the games, quotes from other sources (magazines, books, and websites), full color photography (including screenshots), and more. Each of the 100 chapters is approximately 850-1500 words in length.

The book will also contain 100 honorable mentions, listed in an appendix near the back. Breaking down the book to 200 titles was a blast, but some painful decisions had to be made regarding titles that I enjoy, but that didn't quite make the cut. The bottom line consideration was how much fun the game is today, but I also took into account historical importance, graphics, sounds, and the like.

The Classic Home Video Games series, now at three books and counting, is a reference tool like Leonard Maltin's movie books, but this new volume for Schiffer will be a lavish coffee table book with lengthy entries, bookstore distribution, full-color photography, and all the trimmings.
Posted by Brett at 9:17 AM