Batman and Superman to Team Up in Man of Steel 2

One of my primary sources of income these days is through AntiqueWeek, a weekly newspaper with several editions published across the country. I typically have 1 or 2 (and sometimes 3) articles per week in AntiqueWeek, and those articles are often printed in more than one edition. I get to write about many of the things I enjoy, including comic books, art, conventions, movies, museums, trading cards, collectible toys, and even video games.

From time to time, I reprint one of those articles on my blog, including this piece on Batman and Superman teaming up to fight crime (and probably one another) in Man of Steel 2. 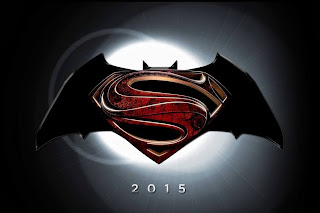 The spectacle that is Comic-Con International: San Diego has come and gone once again, leaving in its wake a number of news items to thrill comic book buffs and fantasy film fans alike. One of the biggest announcements came at the end of the Warner Bros/Legendary Pictures panel, where it was revealed that Batman and Superman will appear together on the silver screen for the very first time.

The tights-wearing twosome will tangle (and, hopefully, work together) in 2015’s Man of Steel 2, directed by Zack Snyder (Man of Steel, Watchmen) from a screenplay by David Goyer (Man of Steel, The Dark Knight Rises). Man of Steel’s Henry Cavill will reprise his role as Superman, but there’s no word yet on who will play Batman.

While this will be the motion picture debut of Batman appearing with Superman, the Caped Crusader and the Metropolis Marvel have fought side-by-side in the comics for decades.

According to DC Comics: Sixty Years of the World’s Favorite Comic Book Heroes (1995, Bulfinch Press) by noted historian Les Daniels, “Superman and Batman shared a brief, one-panel cameo as early as All Star Comics #7 (1941, $5,800 in near mint), but didn’t really get together until Superman #76 (1952, $3,800),” in which Bruce Wayne and Clark Kent independently (not to mention coincidentally) book a vacation cruise on the same ship, learning one another’s secret identities in the process. 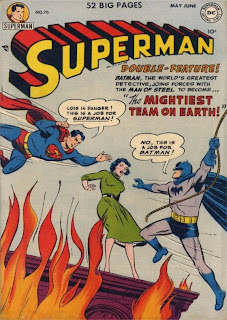 Starting with World’s Finest #71 (1954, $2,500), Batman and Superman began appearing within the same stories on a regular bases. In previous issues of World’s Finest, the pair would appear together on the covers, but in separate stories. According to Daniels, the team-ups were serendipitous, occurring “after production economics had shortened the page count and forced them to share the same story.”

During the Silver Age of Comics, Batman and Superman were the best of pals. However, beginning in 1986 with John Byrne’s Man of Steel Superman reboot and Frank Miller’s seminal The Dark Knight Returns, which is set in a dystopian future, the duo’s disparate natures came to the forefront, kick-starting years of conflict—much of it violent—between DC’s two biggest icons.

Industry veteran Paul Kupperberg, who has written numerous Superman titles for DC, prefers cooperation between the characters instead of contempt—fighting evil instead of each other.

“Superman and Batman are good guys, working towards the same end, so why wouldn’t they be friends,” he said. “Of course, that was back in the olden days, when super-heroes were still the good guys, as opposed to the dark and gloomy interpretations we get these days. It would never occur to ‘my’ Superman or Batman to be anything but friends. Superman could achieve the physical things Batman wasn’t capable of doing while Batman could provide Superman with the strategic thinking that the more direct, punch-his-way-through-a-wall Man of Steel didn’t usually employ.”

Kupperberg’s favorite Batman/Superman team-up of all time is “The Origin of the Composite Superman” from World’s Finest #142 (1964, $140), in which a freak accident gives a man all the powers of the entire Legion of Super-Heroes.

“I was nine years old when it came and it just blew my mind,” he said. “The concept was amazing and the visual was awesome. I read and reread that book until it disintegrated. These days, I keep the DC Direct Composite-Superman figure on my desk.”

Regarding Zack Snyder’s Man of Steel 2, which is set to begin filming next year, Kupperberg will approach the movie with “VERY guarded optimism,” hoping that Batman and Superman will put aside their differences long enough to work together as a team.
Posted by Brett at 9:44 AM