Alien: The Movie and the Maze Game

For your reading pleasure, here is the first chapter of my recent book, Retro Pop Culture A to Z: From Atari 2600 to Zombie Films. If you enjoy it, please consider purchasing the digital version of the book, or the large softcover. As always, thanks for reading!


Alien: The Movie and the Maze Game 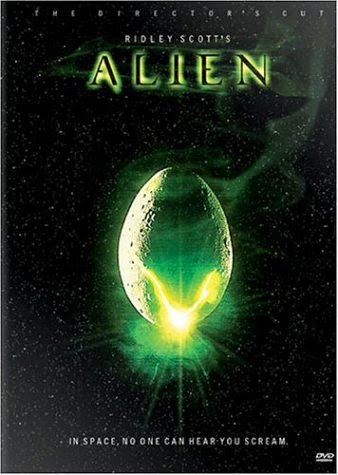 So goes the tagline for Alien, one of the greatest (not to mention scariest) science fiction movies ever made. Released in 1979 by 20th Century Fox, Alien was directed by the great auteur Ridley Scott (from a screenplay by Dan O’Bannon), who would achieve further fame in the ensuing years with such fantastic films as Blade Runner (1982), Thelma & Louise (1991), and Gladiator (2000). While certain science fiction purists of the day belittled Alien for its many monster movie moments, the film did earn its fair share of praise, including: an Oscar for Best Visual Effects; a Hugo for Best Dramatic Presentation; and Saturn Awards for Best Director, Best Science Fiction Film, and Best Supporting Actress (Veronica Cartwright).

The story, which was influenced in part by the sci-fi B-movie classics It! The Terror from Beyond Space (1958) and Planet of the Vampires (1965), centers around the space freighter Nostromo that, reacting to an apparent distress signal, lands on a dark, dreary, windswept planet, and the resulting chaos that ensues. Said chaos comes in the form of horrifying, acid-dripping, H.R. Giger-designed monsters that go through several stages of increasingly scary metamorphoses, including an incubation period inside the human body. Needless to say, things don’t turn out too well for most of the Nostromo crew members--the chest-bursting business is particularly gruesome. 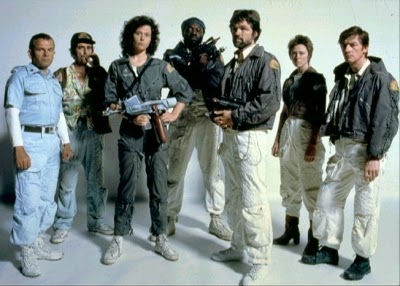 Thanks to its shockeroo thrills, gothic imagery, and iconic monsters (despite the singular title, there’re numerous aliens in the film), Alien is as much a horror picture as it is a sci-fi feature. The film oozes with creepy atmospherics from the beginning—the awakening of the Nostromo crew—until the end: Ripley returning to sleep after her nightmarish, but all-to-real alien encounter. Watching Alien today, the viewer realizes that it hasn’t dated a minute, from the dark, greasy, industrial design of the ship to the gorgeous visual effects to the quality acting of the ensemble cast, which includes Sigourney Weaver (Ripley), Tom Skerritt (Dallas), Veronica Cartwright (Lambert), Harry Dean Stanton (Brett), John Hurt (Kane), Ian Holm (Ash), and Yaphet Kotto (Parker). 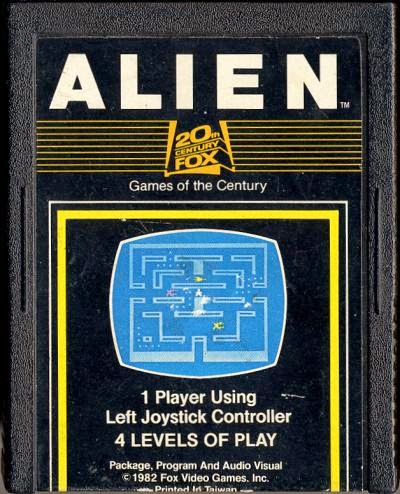 Now, the Atari 2600 version of Alien is another matter entirely. The game reduces the unqualified brilliance of the film to a simple maze game, one that shares much in common with Pac-Man (with some Freeway thrown in for good measure). With that bitter pill swallowed (so to speak), the discerning gamer is faced with two points of consideration: Is Alien a good Pac-Man clone, and is it worth playing. The answer, I’m glad to say, is a resounding “yes” on both fronts. 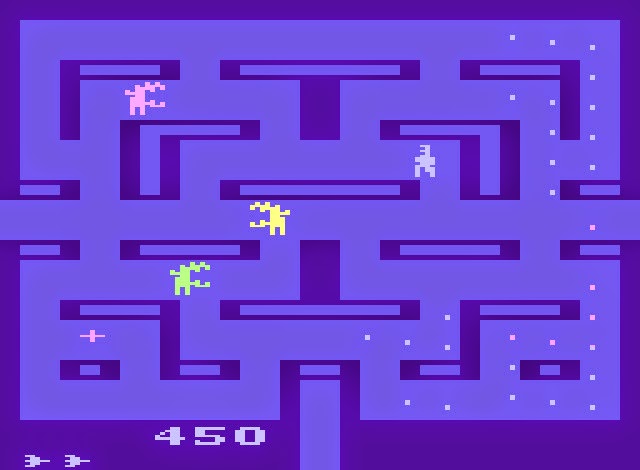 The protagonist players control in Alien is a humanoid that is never referred to by any name other than “you” or “human.” Players must guide the stick figure-like being as he scurries around a top-down maze (though the player and the enemies look as though they are turned on their side), avoiding a trio of Aliens and gobbling dots (ahem, crushing Alien eggs) lining the pathways. The maze, which contains a pair of Pac-Man-esque side exits called hyperwarp passages, is supposed to represent the hallways in the hull of the Nostromo, but it is utilitarian in nature and largely unadorned.

The Aliens roam around the maze in similar fashion to the ghosts in Pac-Man, but they enter from the bottom of the screen instead of the middle. To turn the tables on the Aliens, players can capture one of three pulsars (which parallel the power pellets in Pac-Man), temporarily turning the Aliens blue and making them vulnerable to attack. Players are also equipped with a weak, largely ineffectual flame thrower, which can be sprayed on an Alien to make it turn away or become immobilized for a short period of time. The coolest thing about the flame thrower is that spraying it as you run over a pulsar leaves that pulsar in place for later usage. 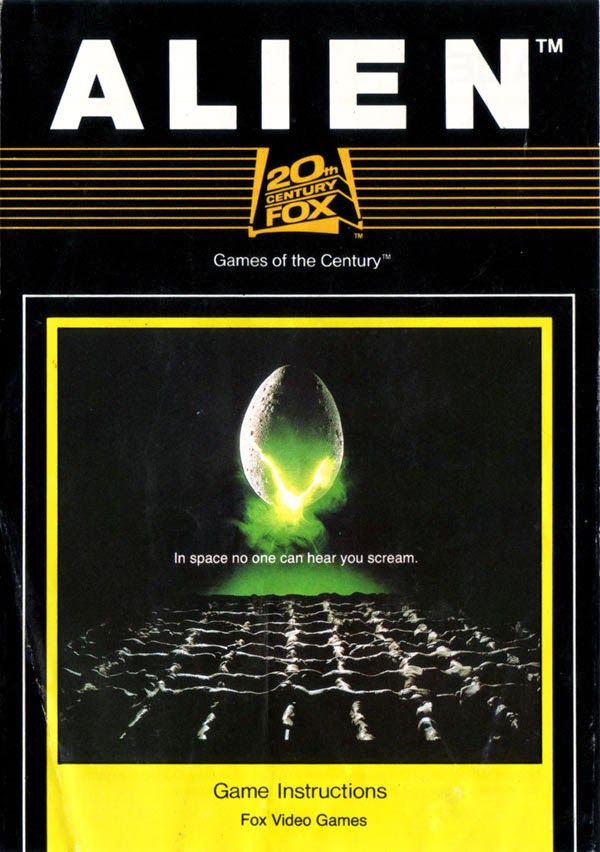 In addition to eggs, Aliens, and pulsars, each maze contains a pair of prizes that grant extra points. After clearing a maze of Alien eggs, the player enters a brief, but oftentimes difficult bonus round, in which the human runs straight up the screen (to a prize at the top), trying to avoid getting run over by six “traffic lanes” of Aliens moving horizontally. This section obviously mimics Activision’s Freeway, but is less versatile and, like the main game itself, lacks two-player action. 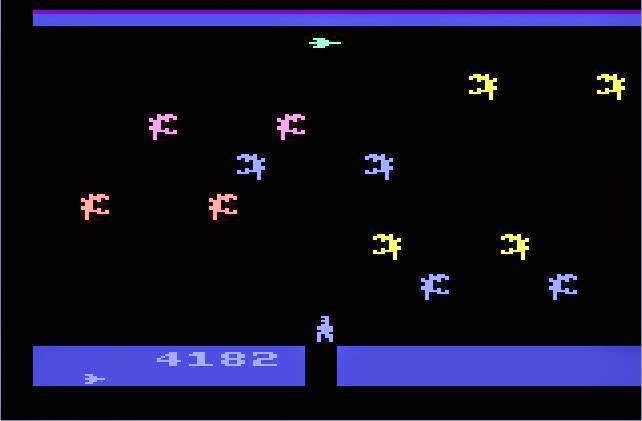 Alien is a fast, fun, and challenging game with tight four-way control and solid, serviceable graphics. In terms of audio, Alien’s “siren song” sound effects mimic Pac-Man pretty well. True, the Aliens look silly (certain reviewers have mockingly called them “chattering teeth”), but as movie games and Pac-Man clones for the Atari 2600 go, you could certainly do a whole lot worse than Alien. Fans of such maze classics as Jr. Pac-Man, Ms. Pac-Man, Jawbreaker, and Mouse Trap should at least give it a try.

Unfortunately, not everyone agrees with my assessment of the game. Keita Iida of Atari Gaming Headquarters (www.atarihq.com), unable to overlook the game’s lack of originality, gives Alien a lowly 50% rating (five out of 10, to be more precise). Tom Zjaba of Tomorrow’s Heroes (www.tomheroes.com) grades the game a C+, calling the Aliens stupid and easy to fool. This tells me that Mr. Zjaba should have played the decidedly difficult—no matter your prowess—game option three.

Even the game’s programmer, Doug “Star Raiders” Neubauer, who designed Alien under the pseudonym of Dallas North, appears to have little to no appreciation for his creation. In an interview published on the Halcyon Days website (accessible via www.dadgum.com), Neubauer, had this to say about his time with Fox Video Games: “I did three games for them under a pen name. One was M*A*S*H, and I forget the name of the other two. Fox was more interested in quantity rather than quality, so they wanted their games cranked out in a hurry. The games weren't all that good as I remember.”

Fox Video Games, a division of 20th Century Fox, released Alien to little acclaim in 1982. The game was advertised in the company’s 1983 catalogue, altering the film’s famous tagline to: “In your living room, everyone can hear you scream.” In addition, the game was listed under “Coming Attractions” in the 1982 catalogue. (Interestingly, the list also included five games that were never produced: 9 to 5, Six Pack, Entity, Tough Enough, and, most intriguingly, The Day the Earth Stood Still).

Recently (relatively speaking), Alien has been the subject of a pair of homebrew hacks. Accessible via AtariAge (www.atariage.com), these include: Attack of the Mutant Space Urchins (2002) and Loco-Robo (2003), latter of which changes the Alien sprites to robots.

In the years since its release, Alien for the Atari 2600, unlike the film on which it is very loosely based, has been largely vilified by purveyors of popular culture. It is almost always written off as a mediocre (or worse) Pac-Man clone, but, at least in my opinion, it deserves a spot in any maze fan’s library of classic home video games.

In fact, if the disastrous, industry-crushing, needlessly convoluted E.T. The Extra Terrestrial had taken the same simple route (imagine E.T. walking swiftly around a maze, dodging hostiles while giddily gobbling up Reese’s Pieces), the infamous Great Video Game Crash of 1983/84 may have been turned out a bit differently. That may be overstating things somewhat, but that’s my take on Alien, and I’m sticking to it.
Posted by Brett at 8:38 AM

I never knew they even made an ALIEN game for Atari. I played ALIEN 3 on the NES a lot when I was a kid. The SNES version of ALIEN 3 was amazing. Still holds up today....kinda.