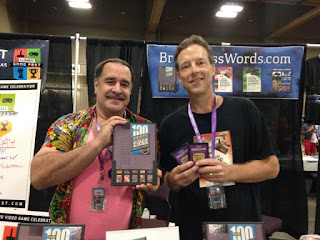 I've known video gamer Todd Rogers since I met him at the Classic Gaming Expo in Las Vegas more than a decade ago. He introduced himself and was very friendly. As many of you know, he’s been accused of fudging his scores on various games, most notably Dragster for the Atari 2600. It’s not looking good for him, and he’s been banished from the Twin Galaxies website.

At the 2015 Classic Game Fest in Austin, we posed for a pic of me holding a couple of copies of Dragster I had for sale at my booth, and him with a copy of my “100 Greatest” book. As always, Todd was friendly, but then something strange happened at the convention a couple of hours later.

I took a break from my table to go to the restroom, leaving my son Ryan to man the booth solo, and when I came back, Ryan handed me the aforementioned Dragster cartridges. Todd had come back by while I was gone and signed and dated them with a sharpie without asking. I was stunned and a little irritated. Who does such a thing?

I was tempted to confront Todd and tell him that the vast majority of the people at a typical video game convention has no idea who he is (even though he is well known within the hardcore retro gamer community), and that scrawling black all over my games was uncool. But he had always been nice to me in the past, and I just couldn’t bring myself to do it. I guess I kinda felt sorry for him. Plus, he meant well and thought he was doing me a favor as he seemed to think his autograph would make the games more valuable. (Turns out he was right, in light of the post-scandal eBay price I received for the cartridge. I included the certificate below to give the game some provenance.) 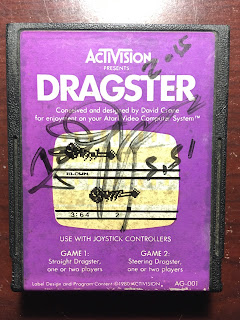 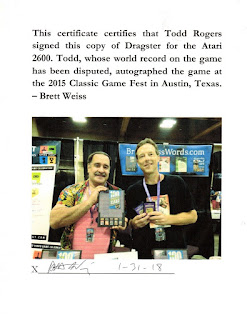 Hmmmm.....maybe he will go down as the biggest video game cheat in history, and weirdly, put some value on those Dragster carts. HA!