I travel all over the country doing video game conventions, and I always have a blast. Unfortunately, most have been cancelled for 2020 because of…well, you know. I did RetroFest in Fort Worth in March, but the Midwest Gaming Classic, ClassicGame Fest, Portland Retro Gaming Expo, Video Game Summit, Long Island Retro Gaming Expo, and others I had plans on attending were preemptively shut down.

Only one remains, as far as I know: the Houston Arcade Expo (November 13-14), which will feature a vendor’s room, panels, cosplay, arcades and consoles set on free play, and more. I recently caught up with founder and organizer Keith Christensen and asked him about his gaming history and the plans for the show this year, including the chances of it being cancelled.

BRETT WEISS: Did you grow up around video games and arcades?

KEITH CHRISTENSEN: As with most any child of the ’70s and ’80s, I grew up with video games and pinball. It started with the home Pong TV games, moved to the Atari 2600, and then finally with my TRS 80 color computer (which I STILL have with all the stuff).

Playing at the local arcades was a rite of passage. I remember playing Lunar Lander at the Hobby Airport arcade when we picked up my dad, Flash Gordon pinball at the local 7-11, and Joker Poker at a church game room. A few of my favorite places were Goodtime Charlie’s (Sharpstown Mall), Gold Mine (Westwood Mall), Games People Play, and Panjo’s Pizza.

I remember taking glass bottle returns to the Lewis and Coker Grocery store so I would have enough money to play Phoenix with my best bud. Later, in the late ’80s and early ’90s, when I was in college, I played pinball at the local rock bars where I worked and hung out. I played all the classic ’90s machines in the wild as they came out. I still find it hard to believe that I’ve collected many of the games I played during my youth. The first arcade I actually owned was a Centipede that I got in 1996. I trade for computer work at a friend’s house in Dallas. That was the first of many arcade games I would own.

WEISS: When was the first Houston Arcade Expo, and how did it come about? Are you the sole owner? 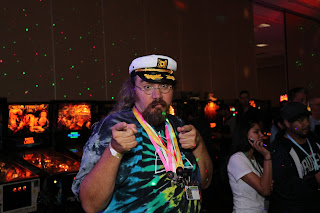 CHRISTENSEN: I was hosting parties at my house and having a blast. I started having kids, so the partying at my house stopped. I got with my buddy Callan Hendricks in 2002 and hosted a party at a club where I used to do sound called Fitzgerald’s. I worked out a deal with the owner and did the first two shows there. After that, we moved to hotels, and the show became a multi-day event. I am the main crazy person in charge, but it takes a team of volunteers to make this happen.

WEISS: What separates the Houston Arcade Expo from similar events?

CHRISTENSEN: It has more of a party atmosphere and is much more laid back. We treat everyone like family!

WEISS: As far as I know, all other gaming shows from April to the present have been cancelled because of Covid-19. How confident are you that Houston will happen as scheduled?

CHRISTENSEN: It’s basically a gamble. I’m going to revisit the situation mid-October to check the numbers and see. We are not going to take any risks and are planning to have a fun yet smaller show. We’ll follow CDC guidelines for social distancing (games and booths at least six feet apart), and masks and hand sanitizer will be available. No entry without a mask. Upon arrival you and your party will have to fill out a short form and sign about your possible exposure to Covid-19. Each time you enter the venue, you will be checked for fever. Traffic from the vendor area to the game room will be in one direction, and there will be a separate entrance and exit.

WEISS: The show is three days this year. Is this a first, and what prompted you to expan
d to three days?

CHRISTENSEN: We moved it back to two days due to Covid-19 to try and manage it better. We will get to three days in 2021. Vendors, attendees, and the staff just cannot get enough—it’s like summer camp is over at the end of each show, so I wanted to delay the sadness by one more day…

CHRISTENSEN: If things do not look safe for us to have the show, we will not have it regardless of what anyone says. If the numbers go through the roof, it is not worth it. However, on the flip side if the Covid numbers are within CDC specs, and the reproductive rate us below 1, I think with the right precautions we can do it! If we have to move it, we have the dates ready for the weekend of November 12, 2021, and ALL tickets and vendor booths will transfer to the 2021 show.

WEISS: Is there a deadline date for when you can say the show definitely will or will not get cancelled?

CHRISTENSEN: We will make the decision mid-October based on the Covid-19 numbers in Harris County and how many people actually want to come out. 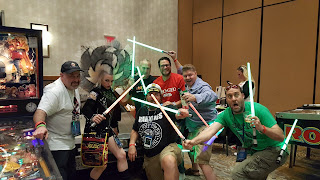 WEISS: If the show gets cancelled, would you consider a virtual convention?

CHRISTENSEN: Since the Houston show is more about the people who attend and their energy coupled with the games and experience, I think it would not translate that well unless we had everyone wearing a VR rig at home with an adult beverage in their hand [laughs]. Other, more structured shows I think can pull it off.

WEISS: Anything else you care to share about the Houston Arcade Expo?

CHRISTENSEN: This show has been and always will be a labor of love for everyone involved with putting it on. Our goal is not to be the biggest show in the land, but the most fun and engaging show we can have for us and all the attendees. I want to thank all the people who help put it on, especially Tina Christensen (my wife), Erich Stinson, Blake Dumesnil, John and Steph Pennington, Edmond Betz, Jay Welch, Carey Fishman, James Ayres, Robert Layne, and countless other folks we love! Peace and arcades!