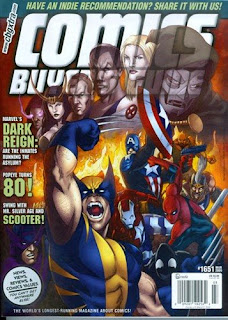 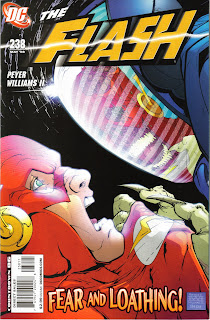 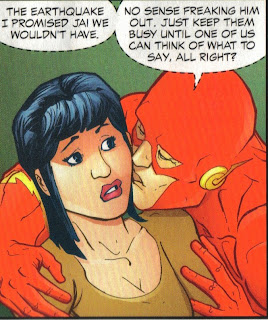 The Flash has been a particularly dull title of late, bogged down by Wally’s annoying kids (who have been aging at a progressively fast rate), and by Linda (who has been stewing with worry over their seemingly dire fate). As this fresh story arc begins, Iris and Jai have been cured, freeing Wally to take them on a trip to Dinosaur Island, which, of course, they complain about.

With his kids cured, Wally does get to have some fun, but, unfortunately, he discovers that he dare not risk going over the speed of sound, which is a similar problem he faced years ago as Kid Flash. The notion of Wally’s powers acting up doesn’t exactly send the senses soaring, nor does the attacking bees storyline involving The Justice League and Amanda Waller.

These two issues are competently written and drawn (certainly more so than the last dozen or so issues), but a reader gets the feeling that Flash is simply running in place waiting for the highly anticipated Flash: Rebirth (Spring, 2009).
Posted by Brett at 4:29 PM