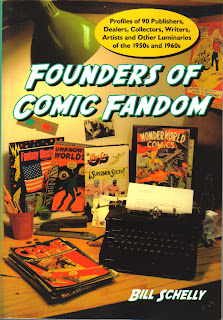 Founders of Comic Fandom is an awesome undertaking, featuring "profiles of 90 publishers, dealers, collectors, writers, artists and other luminaries of the 1950s and 1960s," including such well-known names as Len Wein and Marv Wolfman (who started off active in fandom and later turned pro). The book is chock-full of fan history, fanzine publishing info., and much more. I was pleased to see several of my friends featured in the book, including Lonestar Comics owner Buddy Saunders and Oklahoma Alliance of Fans co-founder Bart Bush.

I was also pleased to be mentioned in the book. In the entry on Bart Bush(page 171), it says: "A 40-year reunion of the members of OAF was held in 2007 at the Biltmore Hotel in Oklahoma City. The event which was coordinated by Bart brought together members of the group from a multi-state region, including some who hadn't been in touch for decades. The emotion-laden affair was attended by many of the original OAFS, as well as dozens of others who had joined later, including such fans as Mark Lamberti, Jerry Weist, Rick Kelsey, Larry Bigman and Brett Weiss (who wrote an account of the event for Alter Ego #87)."

One disappointment was the absence of an entry for longtime fan/writer/pro Tony Isabella, a fellow contributor to the Comics Buyer's Guide. On page 1 Bill mentions that the reason Tony, Gary Groth, Russ Cochran, and certain other key members of early fandom were not included was due to simple space limitations. He also says he would be happy to write a second volume pending sufficient demand. I, for one, would love to see a sequel. (Current CBG contributors who do have entries include Michelle Nolan and Maggie Thompson).

Founders of Comic Fandom is an informative, fun-to-read book on an esoteric subject. It's a must-own for those interested in both comic book fandom and comic book history in general. For ordering information, click here.
Posted by Brett at 3:20 PM