The Void: Centauri Conflict for the ColecoVision 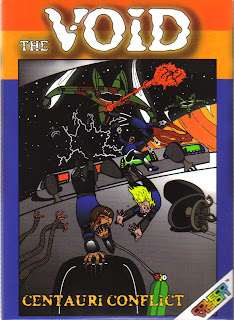 Enter The Void, if you dare.

The Void: Centauri Conflict is an enjoyable new homebrew game published by Atari2600.com, one of the best and most respected videogame retailers on the planet. It’s an old-school shooter in the tradition of such time-honored classics as Astrosmash, Demon Attack, and Gorf.

Players guide their ship back and forth along the bottom of the screen, firing upward at four different types of attacking alien ships that move either right, left, down, or in a zigzagging motion. There are never too many enemies onscreen at once (though some of them must be shot more than once), and they are spaced apart pretty well, making for a challenging, but fair game in which accurate aiming is crucial to the player’s success. There are also asteroids and boss ships, the latter of which move horizontally and fire long beams.

The graphics are flat, but serviceable, and the ship design is uninspired. However, you do get to select from four different ships, each a different color and speed, and each upgradeable by grabbing a special weapon: Daisy (dual bullets with single shot kill), Dr. O’Celoc (torpedo with remote detonator), Adam (shield bubble), and Illusion (ray beam). In addition, there are 12 player rankings to work your way through, each taking a larger amount of points to acquire: Space Cadet, Second LT, First Lt, Captain, Major, Lt Colonel, Colonel, Brig General, Major General, Lt General, General, and Fleet Admiral.

Overall, The Void is a solid shooter and a nice addition to any ColecoVision owner’s library. You may have to hit the reset button from time to time due to an occasional glitch, but this is hardly unheard of in a homebrew game.

You can order the game here.
Posted by Brett at 9:25 AM