A Forbidden Look Inside the House of Ackerman 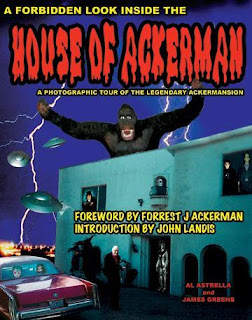 During his 92 years, the late, great Forrest J Ackerman indulged in many an eerie endeavor, from winning the first Hugo (#1 Fan Personality) to creating Vampirella to coining the term “sci-fi.”

Forry was an actor, a writer, a literary agent, the editor of Famous Monsters of Filmland and the world’s foremost collector of SF (ahem, sci-fi) memorabilia, the latter housed for many years in the Ackermansion, an 18-room vacation destination for thousands of monster kids. (Forry called it Son of Ackermansion since it was actually the second home to house his immense collection).

I never had the pleasure of visiting the hallowed halls of Forry’s aforementioned abominable abode, but in 2006 I did manage to squeeze in an hour or so at the Acker-mini-mansion, a Hollywood bungalow displaying a drastically reduced portion of Forry’s autographs, posters, movie props and other items. (Advanced age, health problems and financial concerns had forced Forry to sell much of his memorabilia and move to a smaller house).

I was struck by the informal nature of the visit, with Forry—hard of hearing, but still sharp—sitting in his easy chair, commenting on his collectibles, posing for photos, telling jokes and fawning over his favorite film: Metropolis (1927), which he told me he had seen 105 times.

As the title suggests, A Forbidden Look Inside the House of Ackerman isn’t a history book (photos far outweigh the text), but it does offer certain behind-the-screams tidbits, such as co-author Paul Davids helping Forry move, and attending the 2009 auction of “the last remaining treasures from the famed Forrest J Ackerman collection”

More importantly, the book gives readers an up close and personal view of the Ackermansion (all three locations) and its many treasures, including Bela Lugosi’s Dracula ring, Lon Chaney’s teeth from London After Midnight (1927), original art by Basil Gogos, a latex head of Forry as the Ackermonster, a torso from the Rod Steiger character in The Illustrated Man (1969) and many more rare, one-of-a-kind and otherwise invaluable items.

In addition to collectibles, the book includes color photos of the mansion’s occupants (Forry and his beloved Wendayne), along with some of its more prominent guests, including Ray Harryhausen, Fritz Lang and Barbara Steele.

Forry and his Ackermansion(s) is no longer with us, but A Forbidden Look Inside the House of Ackerman will help the preserve the legend for generations of SF (ahem, sci-fi) fans to come. 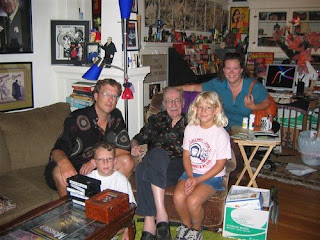 My family and I hanging out with Forry at his Hollywood home back in 2006.
Posted by Brett at 10:27 AM