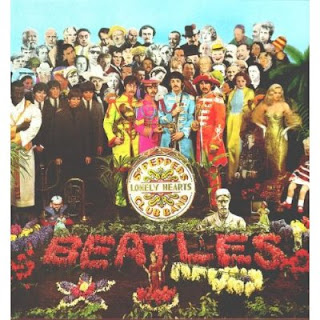 This article on the state of the record industry appeared in a recent issue of AntiqueWeek:

Remember the satisfying feeling of breaking the shrink wrap on a new record album, sliding the vinyl disc out of the cardboard jacket and paper sleeve, placing said disc on the family turntable (often a component of a massive wooden console), plopping down on your favorite beanbag chair, and letting the immersive sounds of Black Sabbath, Deep Purple, the Doors, or the Eagles wash over you as you whiled away the hours on a lazy summer afternoon?

If you grew up during the’60s or ’70s, it’s very likely you experienced something similar to the above scenario. Similar to today (at least conceptually), you could purchase single songs then—actually, there were two songs on a 45 RPM record since there was a second song on the flip side (often called the “B” side)—but it was the long-playing record album (LP for short) that could truly show what a musical act was capable of, both in terms of musicianship and experimentalism.

The record industry of the ’50s and early ’60s was dominated in some respects (such as radio airplay and units moved) by hit singles, but when acts like Bob Dylan (Highway 61 Revisited), the Beach Boys (Pet Sounds), the Beatles (Sgt. Peppers Lonely Hearts Club Band), the Jefferson Airplane (Surrealistic Pillow), the Rolling Stones (Their Satanic Majesties Request), and The Who (Tommy) helped turn the rock album into a singular (no pun intended) art form, no rock ’n’ roll connoisseur worth his or her headphones would be caught dead buying a 45 (though singles were still very popular with kids and mainstream consumers).

For the aforementioned landmark albums, the final product was much more than the sum of its parts. Taken out of context, the dreamlike “Lucy in the Sky with Diamonds,” for example, is a great song, but woven into the tapestry of the epic Sgt. Peppers, it’s nothing less than a transcendental masterpiece.

Long before MP3 players, iTunes, and the Internet, which make sampling music from a variety of artists cheap and convenient, going to K-Mart or Sears to purchase a new record was an almost spiritual experience as you usually had to take it on faith what the album would sound like based on little more than cover art and maybe a song or two you heard on the radio. The anticipation, mystery, and fascination surrounding an album’s unknown contents were in fact part of the appeal of the format.

In a recent issue of The Sunday Times Magazine, longtime rocker and LP fan Jon Bon Jovi, grumpily railing against the jejune nature of downloading songs, went on a “get off my lawn” type of rant against Apple co-founder and CEO Steve Jobs, claiming that he “is personally responsible for killing the music business.” (Apple’s iTunes Store is the number one music vendor in the country.)

Explaining his position, Bon Jovi said, “Kids today have missed the whole experience of putting the headphones on, turning it up to 10, holding the jacket, closing their eyes and getting lost in an album; and the beauty of taking your allowance money and making a decision based on the jacket, not knowing what the record sounded like, and looking at a couple of still pictures and imagining it. God, it was a magical, magical time.”

Bon Jovi’s trashing of Jobs is a bit unfair—as EW.com points out, “Jobs is really pretty much the only guy who has managed to successfully monetize online music consumption”—but his waxing nostalgic about buying record albums as a kid does resonate, at least for those of us who grew up doing the same.

Bon Jovi is hardly alone in his preference of records to downloadable songs (or, for that matter, CDs). Certain audiophiles, precocious teens, collegiate hipsters, and nostalgic baby boomers are once again (or for the first time, in the case of younger listeners) getting their groove on (so to speak) with vinyl.

This is a drop in the proverbial bucket compared to CD sales and music downloads (LPs count for only one percent or so of the entire market), but it is a trend worth watching as it’s rare and maybe even unprecedented that an outdated form of electronic media makes such a strong comeback.

In addition to the romanticism of the LP espoused by Bon Jovi, many vinyl devotees claim that record albums, if played using the proper equipment, have a thicker, richer, meatier sound than digital music, thanks in part to superior mid-range quality. Also, most LPs released nowadays feature collectible (or just plain fun) inserts, such as posters, booklets, stickers, limited edition art, and/or extended liner notes. (Some older records, such as Love Gun by KISS, featured special inserts, but it was hardly the norm).

As a concession to modernity, many new albums also include complementary digital downloads of the content contained on the album, meaning the music buyer can have his or her cake and eat it too. Jenkins Boyd, co-owner of Doc’s Records and Vintage in Fort Worth, TX, says that most of the popular current bands release their new material on vinyl. “People like their iPods and their downloadable songs, but they also want to have a physical piece of music.”

Even though CDs outperform LPs by a wide margin at retail giants like Best Buy and Hastings, that’s not necessarily the case at specialty shops. “We really don’t carry very many new CDs because they don’t sell well,” Boyd says. “Records are just a lot cooler than CDs, and people like the inserts and larger cover art.” (According to Billboard.biz, the top three selling vinyl artists of 2010 were the Beatles, with 36,700 units sold, Black Keys, with 36,000 units, and Radiohead, with 30,500 units. LPs by Vampire Weekend, Beach House, Pavement, the National, Michael Jackson, Pink Floyd, and Metallica also fared well.)

In addition to new records, Doc’s carries a wide variety of previously owned LPs, including a ton of stuff from the 1ate ’60s through the ’70s. “We can’t keep Led Zeppelin records in stock,” Boyd says. “We also sell a lot of Pink Floyd, Jimi Hendrix, and the Beatles. Certain Rolling Stones titles are popular as well.”

Speaking of the Beatles, Doc’s has a hard time moving some of the Fab Four’s rarer, higher priced records. “Really expensive Beatles stuff doesn’t tend to sell very well,” Boyd says. “Everyone wants the cheaper reissues. They just want to listen to the music—they don’t care so much about the collectability.”

Despite its lack of Beatlemania, at least when it comes to prestige items, Doc’s does cater to record collectors, offering an assortment of first pressings, foreign releases, picture discs, promotional items, colored vinyl, and out-of-print music. However, the majority of customers who walk through Doc’s doors are looking for a bargain, meaning most used records at the store sell in the $4 to $15 price range.

Of course, for those who are interested in rare LPs, one of the best sources is eBay. A quick search of recently completed eBay auctions turned up the following: a mono/promo/factory sealed copy of Something New by the Beatles ($967); a clear vinyl/first pressing of Stoneaged by the Rolling Stones ($455); a Sober/Prison Sex picture disc by Tool ($399); a first U.S. pressing of Moon Dance by Van Morrison ($360.55); a factory sealed-with-poster copy of Burning Love and Hits from His Movies by Elvis Presley ($314.99); a white label promo copy of Live Cream by Cream ($265); and a copy of The Beatles VS The Four Seasons ($245).

The record industry, which reached its peak during the 1970s, has its roots in Thomas Edison’s cylinder phonograph (1877), a crude, but revolutionary machine that recorded and reproduced sound onto a tinfoil sheet phonograph cylinder. Chichester A. Bell and Charles Sumner Tainter, working for Alexander Graham Bell’s Volta Laboratory (Chichester was Alexander’s cousin), improved upon Edison’s invention by using wax-coated cardboard cylinders and a floating stylus, the latter of which replaced Edison’s more rigid needle.

In 1888, Emile Berliner furthered the concept by inventing the gramophone record, which was a flat, two-sided disc. The 78-RPM phonographic disc followed (RPM refers to rotations per minute), and in 1948 Columbia released the first modern day LP in the form of a 12-inch, 33⅓-RPM microgroove vinyl record. Prior to vinyl, records were made of such materials as hard rubber, metal, or, most prominently, shellac, which was brittle and could shatter fairly easily.

During the 1980s, compact cassettes and compact discs began replacing LPs as the medium of choice among music buyers. By the early 1990s, thanks in part to major music labels convincing consumers to “upgrade” their music library to CDs, vinyl was declared all but dead.

Lucky for collectors, nostalgia enthusiasts, vinyl purists, and hipsters, and for “grumpy old men” like Jon Bon Jovi, the long-playing record album is once again a player in the music industry. Whether it reassumes its role as a major player is yet to be seen.