McFarland sent me a copy of this book, which is a pretty cool read for a Batman fan such as myself. Full review below. 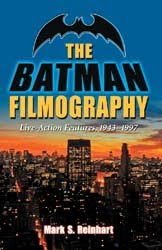 Batman Begins (2005) is mentioned in conclusion, but neither it nor The Dark Knight (2008) is covered. This is because the first edition hardcover was published in 2005, and this newly minted trade paperback hasn’t been updated to include those films. This is a shame because Reinhart does a nice job critiquing each movie (he’s a fan, but he offers objective criticism), and he includes production history without bogging down the text with too much minutia or technical jargon. He’s also adept at comparing the filmic Batman to the comic Batman.

The Batman Filmography is fun, informative (if dated) reading, but it could use quotes from cast and crew members. Photos—even some black and white shots—would also be nice.

tienda aeromodelismo said...
This comment has been removed by a blog administrator.
December 23, 2011 at 9:45 PM

Thanks for your kind words about my book. I'm happy to report that a second edition of the book will be available next year -- it will be updated with a large amount of new information, including coverage of Christopher Nolan's Batman film trilogy.