How I "Broke Through"

The new issue of The Writer, currently available at Barnes and Noble, features my story on how I broke through as a freelance writer. 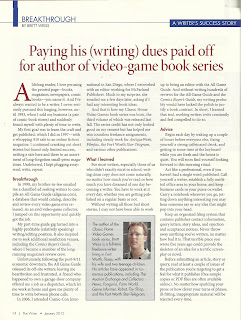 Here's the text from the article:

A lifelong reader, I love perusing the printed page—books, magazines, newspapers, comic-books—you name it. And I’ve always wanted to be a writer. However, I never seriously pursued this longing until 1993, when I sold my business (a pair of comic-book stores) and suddenly found myself with plenty of time to write.

My first goal was to learn the craft and get published, which I did in 1997—with a whopping $10 sale to an online fiction magazine. I continued cranking out short stories, but only found limited success, netting a sale here and there in an assortment of long-forgotten small-press magazines. Undeterred, I kept plugging away: read-write-repeat.

In 1998, my brother-in-law emailed me a classified ad for the All Game Guide (www.allgame.com), a database that would catalog, describe and review every video game ever released. As an avid video game collector, I jumped on this opportunity and quickly got the job.

My part-time All Game Guide gig transformed into a highly profitable (relatively speaking) writing/editing position, inspiring me to seek additional non-fiction venues, including the Comics Buyer’s Guide, where I became a member of the long-running magazine’s Review Crew.

Unfortunately, following the post-9/11 economic downturn, the All Game Guide released its off-site writers, leaving me frustrated and heartbroken. A friend who happened to own a garage door company offered me a job as a dispatcher, which let me work at home and gave me plenty of time to write between phone calls.

In 2006, I attended Comic-Con International in San Diego, where I networked with an editor working for McFarland Publishers. Much to my surprise, she emailed me a few days later, asking if I had any interesting book ideas.

And that is how my Classic Home Video Games book series was born, the third volume of which was released last fall. The series credit has not only looked good on my resume but has helped me get countless freelance assignments, including steady work for AntiqueWeek, Filmfax, the Fort Worth Star-Telegram and various other publications.

For most writers, especially those of us who didn’t exactly excel in school, writing clean copy doesn’t come naturally, no matter how much you have read or how much you have dreamed of one day becoming a writer. You have to work at it every day, whether you are getting published on a regular basis or not.

Without writing all those bad short stories, I may not have been able to work my way up to editor with the All Game Guide. Without writing hundreds of reviews for the All Game Guide and the Comics Buyer’s Guide, my writing probably would’ve lacked the polish to justify a book contract. In short, I learned that real, working writers write constantly and feel compelled to do so.

Begin each day by waking up a couple of hours before everyone else, fixing yourself a strong caffeinated drink, and getting in some time at the computer or word processor while you are fresh and the house is quiet—you’ll soon find yourself looking forward to this morning ritual.

Act like a professional, even if you haven’t had a single word published. Call yourself a writer, establish a fully outfitted office area in your home, and keep business cards in your purse or wallet. Carry a notebook wherever you go, jotting down anything interesting you may hear someone say or any idea that might pop into your head.

Keep an organized filing system containing such things as publisher contact information, query letters, story ideas, and rejection and acceptance notices. Never throw away anything you have written, no matter how bad. That terrible piece you wrote years ago could provide the skeleton of an idea for a terrific screenplay or novel.

Prior to submitting an article, story or query, read at least a couple of issues of that publication to get a feel for what they publish (free sample copies or PDF files are often available online). No matter how sparkling your prose or how clever your turn of phrase, ill-fitting, inappropriate material will be rejected every time.

The author of the Classic Home Video Games book series, Brett Weiss is a full-time freelancer living in Fort Worth, TX with his wife and two teenage children. His articles have appeared in numerous publications, including Auction Exchange, Fangoria, Farm World, Game Informer, Robot magazine, Toy Shop, and the Fort Worth Star-Telegram.
Posted by Brett at 5:58 PM