75 Years of DC Comics: The Art of Modern Mythmaking

My review of 75 Years of DC Comics: The Art of Modern Mythmaking is in the latest issue of Hogan's Alley, which you can subscribe to here. The text of the review is posted below. 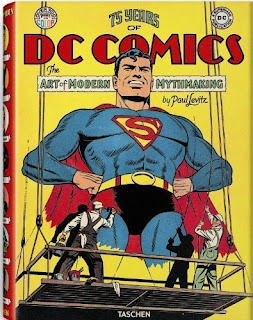 A massive tome of mammoth proportions, 75 Years of DC Comics should not rightfully be called a coffee table book—it’s simply too danged big. In fact, given that it weighs almost 20 pounds and, when open, fills most of the work space of the average office desk, it could almost be a coffee table (all it needs is four legs).

Size (and resultant pricing) clearly matters with a book like this—for $200, the volume will strain your wallet as well as your back (though deep discounts are easily found)—but big and good don’t always work in tandem (just ask the crew of the Titanic).

Fortunately, 75 Years of DC Comics is anything but an oversized paperweight. Rather, it’s a fitting (assuming XXXL is your size) celebration of the grand old comic book company that gave the world many of its instantly recognizable cartoon icons, including Superman, Batman, Robin, Wonder Woman, Aquaman, and the Flash.

Written by former DC Comics president Paul Levitz, who recently ended another stint on The Legion of Super-Heroes, the book uses its considerable bulk to show off exactly what it is that makes comic books special: their visual (not to mention visceral) appeal.

Sure, there’s plenty of well-informed text discussing the history of DC, spotlighting important issues and storylines and giving the lowdown on who created what and when, but the true star of the show is the book’s bodacious, ostentatious, flat-out-hellacious, four-color pages.

75 Years of DC Comics is divided into the various comic book ages: Stone (substituting for Platinum), Golden, Silver, Bronze, Dark, and Modern. Each section begins with a two-page spread on metallic paper, setting the proper tone (so to speak) for what’s to follow: covers and interiors, splash pages and strips, original illustrations and sketches, rare collectibles and even rarer photos (for a grand total of more than 2,000 images).

Once the reader has become accustom to the glare and sheer spectacle of the book’s presentation, he or she can settle in for some truly interesting and entertaining reading. Levitz, writing with the confidence and knowledge of the longtime insider that he is, covers everything from the advent of New Fun #1 (the first comic book with all new material) to the creation of Superman and Batman (and their influences) to the fall (and subsequent rise) of the super-hero to the current state of the industry. While some of the messier historical topics aren’t broached (this is a DC-friendly project, after all), there’s plenty of meat to chew on for casual fans and hardcore collectors alike.

Produced during a time of uncertainty for the publishing industry, 75 Years of DC Comics, with its gorgeous pages, sturdy hardcover binding, elaborate packaging (it’s housed in a Superman box with a handle), and overall timeless quality, is big, bold, bravura proof that print is indeed far from dead. 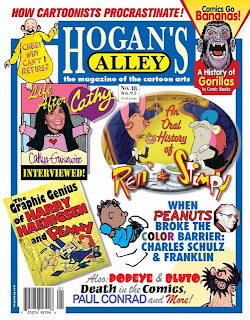