The Greatest Review of All Time

Okay, maybe it's not the greatest review of all time, but it is my favorite review of any of my books. Shortly after my first book came out, noted film critic John Kenneth Muir reviewed it for issue #4 of Game Culture Journal.

In 2008, it will be thirty years since the Atari VCS made the brand name Atari virtually synonymous with the term “video game.” With this cultural milestone on the horizon, it is the perfect time for author Brett Weiss to unleash this mammoth guide of home video games marketed in the heyday of the 2600.

Classic Home Video Games, 1972-1984 (2007; McFarland, $55.00) includes detailed chapters on every game console released during this epoch. That’s sixteen systems in all; from Adventure Vision and the Atari 2600 to Telstar Arcade and Vectrex. The text also includes a thorough catalog of every cartridge released for each system, including ports of popular coin-operated arcade games. The appendices offer a useful and highly detailed glossary as well as a brief look at homebrew games.

In a personal and well-written preface, Weiss introduces the reader to the subject matter while pinpointing the historical context; the birth of video games in the seventies and the early Age of Reagan. The author discusses Surgeon General C. Everett Koop’s assertion in the eighties that video games were “hazardous” to the health of children. Weiss then proceeds to explain in convincing terms why this was a bum rap.

Weiss’s argument begins with a bit of industry background (especially regarding video game pioneers Ralph Baer and Nolan Bushnell), but ultimately it is the author’s sense of personal connection to the format that points to the inherent value of the games and consoles of the era.

Just as many film writers gaze upon the maligned format of the horror film as a healthy avenue of catharsis, Weiss convincingly suggests the same is true for the video games of the Golden Age. “Video games give players control of a closed, finite universe, governed by a specific set of rules, as opposed to actual life, where we often wing it as we go along,” he writes. “There’s rational, almost sympathetic logic to video games that reality lacks…Video games are no substitute for real world pleasures…but they do provide a nice reprieve from real world woes.”

In other words, Weiss finds order (and thus comfort) in the world of classic video games such as Space Invaders, Zaxxon, and Defender. He also notes the interactivity of the video game as an improvement over television, which he sees as a more passive experience. Perhaps the video game is indeed as close as we can get to playing God. Here, as Weiss suggests, we can re-boot existence if we make a mistake. Here, we control the fates of armies and spaceships, men and Pac-Men.

The Book’s sixteen game system entries follow the same easily-digestible format. The entries commence with a detailed description of the console/joysticks and usually feature a black-and-white photograph of a system in question. Then Weiss runs down a history of brand (for example, the Astrocade): when it was released; how many game cartridges were available; success or failure in the marketplace; and the limitations and strengths of the system as a vehicle for game play.

After a discussion of the console, Weiss launches into wide-ranging alphabetical surveys of every cartridge available for the system, noting publisher, developer, and year of release. Following this data is a paragraph-long critical assessment. There are hundreds of game reviews in the Atari 2600 section alone.

Weiss’s deep familiarity with his chosen subject matter is an asset of the text, and as a writer he conveys information clearly and without pretension. The author makes readers aware of games that became notorious in their day; whether for reasons good, bad or obscure. The Atari 2600’s misbegotten E.T. The Extra Terrestrial and port of Pac-Man are two of that console’s most notorious failures, for instance, and Weiss explains why this is so and how each Waterloo contributed to the “Video Game Crash” of 1984.

Individual game cartridges in Classic Home Video Games tend to stress playability. Weiss also spends much time comparing and contrasting port games with their coin-op antecedents, noting for instance, how the original, real-life Cold War/nuclear war context was removed for the Atari 2600 version of Missile Command, replaced with a remote science fiction setting on another planet.

If anything can be determined lacking this impressive and fun book, it’s only this: a clearly-defined set of aesthetics rigorously and objectively applied to each game. This isn’t a rap on Weiss or his work: the aesthetic criteria of video games have not been adequately codified given the relative youth of the form and the hesitancy on the part of some to consider video games an art form. That established, this book—though undeniably smart, historically valuable and wide-ranging in coverage, doesn’t pick up that gauntlet to a significant degree.

Still, the breadth of coverage here is astounding. The text’s organization (by game system, and alphabetically by cartridge) permits for quick, easy reference, and I was delighted to find included here games that I had only hazy memories of from my youth, such as the Atari 5200’s Astro Chase and a highly frustrating game called Beam Rider. I was also tantalized by the fact that there were Atari 2600 video game versions of horror movies such as Halloween and The Texas Chain Saw Massacre that I never even heard of, much less played. The latter allows a person to play as Leatherface! What I wouldn’t do to pop those game cartridges into my refurbished Atari 2600 today.

For those who lived through the Atari-Intellivision-ColecoVision-Vectrex “Golden Age,” Classic Home Video Games is a fun read and a nostalgic trip supreme. For those who arrived on the scene later, this book still fulfills an important purpose; charting the pre-history and trajectory of the video game boom, the opening chapter of a medium that continues on a blazing ascent.

You can read sample pages of the book here.

You can order the book here. 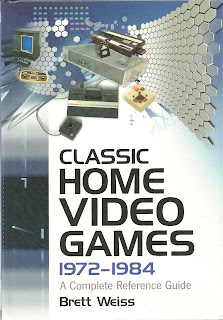