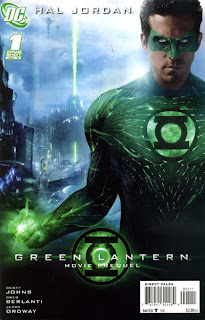 One of five Green Lantern film prequels, the others focusing on Abin Sur, Kilowog, Sinestro, and Tomar Re, Green Lantern Movie Prequel: Hal Jordan is intended, one would presume, to supplement the movie-going experience by filling in details not found in the silver screen rendition of everyone’s favorite Emerald Warrior.

Unfortunately, this one-shot is comprised almost entirely of scenes taken directly from the film, from Jordan’s father’s death to his acceptance of the ring to the barroom brawl with a superior officer. The story, “Being Human,” is told via a conversation between Tomar Re, who deeply believes in Jordan, and Sinestro, who thinks fear will prevent Jordan from being a worthy Green Lantern. About the only thing new, other than said conversation, is a brief appearance by a grinning, towel-wearing, beer-swilling Guy Gardner.

The issue does include an original (if routine) backup tale starring Ngila G’rnt, the purple Green Lantern from Inguanzo (a war-ravaged world in Sector 542) who made her debut in the film.

Both stories are beautifully illustrated, but ultimately non-essential.
Posted by Brett at 7:23 AM