My article on Dynamite magazine appeared in a recent issue of AntiqueWeek. Here's that article, reprinted in its entirety:

If you were in elementary school in America during the mid-to-late 1970s, you probably remember Dynamite magazine, a pop culture publication aimed at kids and published by the Scholastic Book Club. 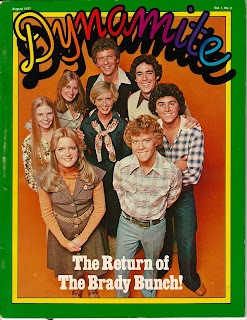 Dynamite received some newsstand distribution, but it was primarily sold through Scholastic, who each month would send brochures to school teachers across the country. The teachers, eager to promote reading, would hand out the brochures to their students, who would check off the books they wanted to purchase and return the next day (or shortly thereafter) with money from their parents.

After receiving the order forms, Scholastic would print the publications in the numbers requested. This was an ideal business model for a magazine, since the far less predictable newsstand distribution system virtually guaranteed that hundreds or even thousands of issues would be returned at a loss to the publisher.

When I was a kid, my mom would let me order three Scholastic items each month. In addition to ordering books, such as H.G. Wells’ War of the Worlds and The Time Machine, I always checked off Dynamite magazine, which I would eagerly devour as soon as it arrived a few weeks later.

The first issue of Dynamite was published in 1974 and featured Hawkeye and Radar—characters from the M*A*S*H TV series—on the cover. The last issue, #165, released in 1992, showcasing actors Julia Roberts and Arnold Schwarzenegger.

In between those book-marking issues, such diverse pop culture icons as Cher, Bruce Lee, The Brady Bunch, Alfred E. Neuman, Rick Springfield, and The Incredible Hulk graced the covers.

Each issue of Dynamite was colorful and entertaining and featured such items as interviews, articles, recipes, comics (including the super-hero strip, “Dynamite Duo”), photo features (such as a “Celebrity Yearbook Quiz”), “Count Morbida’s Monthly Puzzle Pages,” and Magic Wanda’s magic tricks. One of the favorite regular features was “Bummers,” which were comic panels derived from reader-submitted ideas—a successful entry netted the entrant a whopping $5.

Debuting in an era before VCRs, cable television, personal computers, and video games (or at least before video games had become ubiquitous), Dynamite was a hit from the get-go, giving kids a good way to pass the time and keep a finger on the pulse of popular culture. According to former DC Comics publisher Jenette Kahn, the brainchild behind Dynamite, the magazine was once the best-selling publication in the history of Scholastic.

In an interview published in the February installment of Back Issue (#57), Kahn told Robert Greenberger that Scholastic approached her with the idea for starting a juvenile magazine. “Executives at Scholastic were aware of Kids [a previous periodical Kahn had published] and asked if I would conceive of another magazine for them,” she said.

Dick Robinson, the head of Scholastic, contracted Kahn to produce three issues of Dynamite. The magazine sold extremely well—too well, in fact. “Dynamite was so phenomenally successful that we weren’t able to come to terms,” Kahn said. “Even when I offered to accept a 1% royalty instead of the 4% royalty that every other author of the book-club section received, Scholastic said I’d be earning too much money and turned me down.”

With Kahn out of the picture, Dynamite soldiered on under the editorship of Jane Stine, wife of children’s author R.L. Stine, creator of the Goosebumps series.

Most kids who bought Dynamite magazine read the issues multiple times and/or passed them around to friends. Since the magazine sold so well and most copies were heavily read, Good and Very Good copies of Dynamite aren’t particularly difficult to locate. However, copies in Fine or better condition are very hard to find, especially complete.

Well-worn copies of Dynamite sell for just $2 to $3 apiece while Very Fine to Near Mint issues with inserts intact (trading cards, posters, and the like) can command anywhere from $10 to $50 each, depending on the popularity and scarcity of the issue. Issues featuring such icons as Elvis Presley (#24) and Farrah Fawcett (#40) on the cover usually sell for more than those sporting such lesser known talents as Mark Fidrych (#38) and Shields and Yarnell (#48). Also, earlier issues are typically worth more than later ones.

There are two issues of Dynamite magazine in particular collectors should keep an eye out for. A special edition 3-D Poster Book with Neal Adams art is fairly difficult to find, as is a special promo edition of issue #49 (featuring Cheryl Ladd on the cover) that was free with the purchase of any size of Concentrated All Detergent. A water-stained copy of the latter with missing inserts recently sold for $45 on eBay. 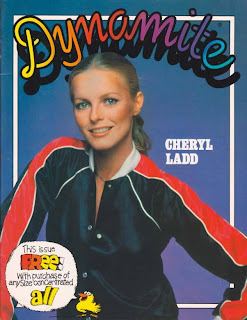 Whether you’re nostalgic for the “good old days” or want to introduce your kids to what you read when you were their age, there’s a lot of fun to be had between the covers of Dynamite magazine. You’ll certainly get bang for your buck.
Posted by Brett at 7:32 AM