Too Much Horror Business by Kirk Hammett 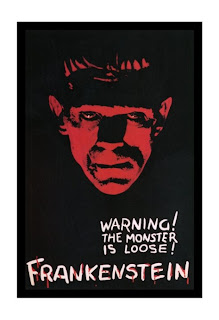 My article on Metallica lead guitarist and monster collector Kirk Hammett appeared in the Halloween issue of AntiqueWeek. You can read it here:

Often wielding a guitar decorated by a painting of Boris Karloff as the Mummy, Kirk Hammett plays lead for Metallica, the famous heavy metal band responsible for such ear-shattering tunes as “Kill 'Em All” (from the band’s 1983 debut album), “Master of Puppets” (1986), and “Enter Sandman” (1991). In 2009, Metallica, which has sold more than 100 million records worldwide, was inducted into the Rock and Roll Hall of Fame.

Many fans undoubtedly assume that Hammett’s Mummy guitar is simply a macabre affectation, a cool and eccentric nod to the quirky lifestyle of the prototypical guitar god. Nothing could be further from the truth. Hammett is a hardcore creature collector and an avowed horror movie buff, amassing an amazing array of monster memorabilia that is one of the best collections of its type in the world.

Hammett’s terrifying treasure trove is the subject of a new book, Too Much Horror Business: The Kirk Hammett Collection (Abrams Image), which features more than 300 photos of Kirk’s collection. Hammett doesn’t offer pricing, but the legendary guitarist does complement each photo (or at least each page) with commentary, such as the impression a particular film had on him as a child or what he thinks of the artwork on a particular poster or model kit box. 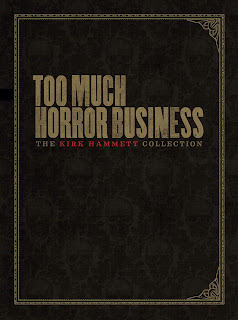 Posters are in fact a huge chunk of Hammett’s collection (as is original art by the likes of Frank Frazetta and Famous Monsters artist Basil Gogos), which dates back to the 1920s. He owns a Spanish Nosferatu (1922) one-sheet, Metropolis (1927) lobby cards, a French Frankenstein (1931) double-panel, a King Kong (1933) six-sheet, a Son of Dracula (1943) half sheet, and far, far too many others to mention. 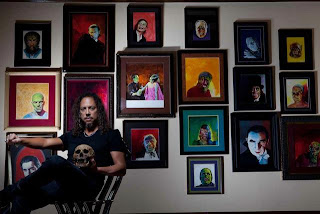 Also impressive are Hammett’s vast array of authentic film props, such as Bela Lugosi’s vest and jacket from White Zombie (1932), Boris Karloff’s outfit from The Black Cat (1934), a Bud Westmore test makeup bust from The Wolfman (1941), a Martian suit from Invaders from Mars (1953), and an alien’s weapon from Invasion of the Saucer Men (1957).

Hammett grew up in San Francisco during the 1960s, a child of hippie parents, watching horror and science fiction movies from a very early age. “When I was five years old I got into a fight with my younger sister and managed to sprain my arm,” he recalled. “My parents then said that I couldn’t go outside and play…they sat me in front of the television, and I soon found myself watching Day of the Triffids [1962], which is about gigantic man-eating plants.”

Day of the Triffids did indeed terrify young Hammett, but it attracted him as well. He even tried to draw the titular creatures, which he loved to fear. “I was obviously as fascinated as I was scared by them,” he said. “I realized that Day of the Triffids was a different kind of movie. It gave me another sense, another feeling. And I enjoyed this ‘other feeling’ very, very much.”

Monster toys entered Hammett’s life shortly thereafter. “I remember very, very vividly seeing my brother bring home an Aurora monster model of Frankenstein soon after I’d seen Day of the Triffids,” he said. “I didn’t know exactly what it was, but I was aware that it was a monster movie because I had seen pictures or stills somewhere. It made an enormous impression on me.”

This “enormous impression” informs Hammett’s collection tremendously. He has some of the rarest, most sought-after monster toys from the 1960s and ’70s, including Universal Monster “soakies” (figures filled with bubble bath), porcelain figures, candy boxes (from Phoenix Candy), paint-by-number kits (from Hasbro), board games (from Hasbro), model kits (from Aurora), wallets, wall plaques, action figures (from AHI), and jigsaw puzzles.

Like many “monster kids” of the era, Hammett spent money that was intended for food on comic books and such monster magazines Creepy, Eerie, and Famous Monsters of Filmland. “My parents started to give me milk money, twenty-five cents a day, which was enough to get some milk and a donut,” he said. “I found out that saving that quarter a day gave me access to a world I wanted to know intimately.” 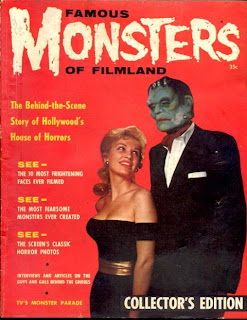 Hammett’s attraction for horror and science fiction, which is just as strong now as it was when he was a kid, goes beyond mere entertainment (though that’s certainly a large part of it). Universal’s original Frankenstein in particular strikes a personal chord, especially since Hammett’s relationship to his alcoholic, drug-taking father was less than ideal.

“There’s a lot of melancholy in Frankenstein,” Hammett said. “He’s the ultimate outsider who’s also misunderstood. And the ironic thing about it is that throughout the course of the movie, the monster’s trying to connect with his creator. He’s looking for a father figure. Perhaps I always deep down recognized it as something of a mirror for my world.”