I don't have as much time for the Comics Buyer's Guide as I used to, but I do have a review in the new issue, #1698. Here it is, reprinted: 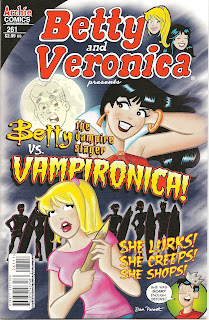 
Everyone wants to live in Riverdale. It’s accepting, friendly, old fashioned, and fun. Not only that, it’s near the beach. Sunnydale, on the other hand, is a dark, scary place with a high death toll and more vampires than a Terence Fisher film. With Betty and Veronica #261, the two worlds collide.

The result is an extremely entertaining story set in the Archie universe, but with Buffy the Vampire Slayer overtones. The gang is enjoying a typically idyllic Riverdale scenario: a weenie roast on the beach. However, their revelry is interrupted by a quartet of mysterious night surfers, followed by a trio of creatures of the night.

As usual, Dan Parent, who is the face of Archie Comics these days, delivers the goods. Veronica is great as a Hammer-type femme fatale while Betty shines as the reluctant vampire slayer. The cover gives away the final page, but that’s okay: it’s a doozy of an ending that will slay fans of the old Warren magazines.

Best of all, the story is continued in the next issue.
Posted by Brett at 4:38 PM