I've been on the Comics Buyer's Guide Review Crew since August of 2001, and I've been a CBG reader since 1989. Today, they announced they are ceasing publication after more than 40 years. Sigh...Another print publication bites the dust.

Here's my last CBG review, reprinted from #1699, the final installment. It's a shame CBG couldn't have lasted just one more issue to make it to 1700. And it's a crying shame that the print industry continues its rapid downward spiral. 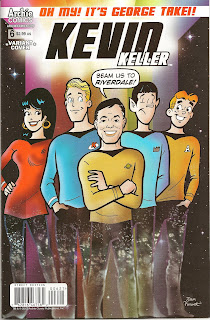 Archie Comics
$2.99, color, 32 pgs.
Writer: Dan Parent
Artist: Dan Parent
Grade: 3.5 Stars (Out of 4)
Kevin Keller #6, which guest-stars George “Sulu” Takei, has a good message about tolerance, diversity, and being true to one’s self, but it’s hardly subtle (though it does fit the story). Since Archie Comics are aimed at kids, that’s not necessarily a bad thing, but the adult reader may feel a little “preached to.”

Speaking of that, those who don’t want to “change the definition of marriage” may be offended by “By George,” which says it’s “okay to be Takei” (rhymes with gay). Those who feel that way can feel free to avoid the issue (so to speak), but it's to be hoped that kindness and acceptance trump bigotry and bullying every time.

In terms of entertainment value, KK #6 is clearly told, nicely drawn, and at times downright comical. 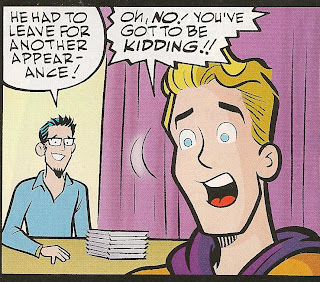