Like many of my articles, this one appeared in a recent AntiqueWeek: 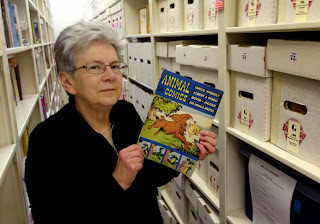 DALLAS, TX—Another comic book auction from the fine folks at Heritage has come and gone, but part one of the $1 Million Don/Maggie Thompson Pedigree Collection was anything but a garden variety event. Rather, it was the culmination of a lifetime of collecting, bringing in sales of $835,384, much of which was for a few key issues and some original art; there were 86 items in all. 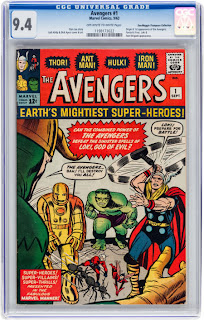 Seller Maggie Thompson, a collector since the 1940s, felt that now was the right time to part with some of her more important, more pristine treasures.

“These comic books have a value, part of which is that their condition is magnificent,” she said in a recent interview with Jyske Bank TV. “That makes me very uncomfortable every time I handle them.”

A writer, blogger, and researcher, Thompson, now 70, has no plans of giving up comic book collecting any time soon, but she’s more than content replacing many of the most valuable comics in her collection with well-worn reading copies.

“What I’m able to do here is to pass on these things that are in beautiful shape to another generation of buyers,” she said, “and I will replace them with rotten condition copies where the covers are coming off, and I don’t care because the story is still there.”

For those not in the know, Maggie Thompson is one of the pioneers of comic book fandom, a phenomenon that took off during the 1960s. In the fall of 1960, Thompson, along with her late husband Don (1935-1994), released a mimeographed one-sheet called Harbinger, which announced the forthcoming publication of Comic Art, an early fanzine devoted to comic books.

Comic Art, which was published irregularly from 1961 to 1968, only lasted seven issues, but it was highly influential in the field, helping pave the way for numerous other comic book fanzines, including the Thompsons’ own Newfangles, which focused primarily on comic book fandom (as opposed to news about comic books and their creators).

Maggie stayed with CBG until January of 2013, when the magazine (formerly a newspaper) ceased publication. She now blogs for Comic-Con International via www.comic-con.org/toucan/categories/maggie-thompson.

Steve Borock, Senior Consignment Director at Heritage Auctions, is proud that his company was selected by Maggie to host the esteemed sale.

“Don and Maggie Thompson were already adults when Fantastic Four #1 came out in 1961, and since comics were their great passion they purchased all of them and handled every new comic with great care," he said. “Their comic collection is truly one-of-a-kind and is well deserving of a pedigree. It's rare to see such a fresh collection come to market and we are honored to be entrusted with it.”

Part two of the $1 Million Don/Maggie Thompson Pedigree Collection auction will be held in February.
Posted by Brett at 11:38 AM