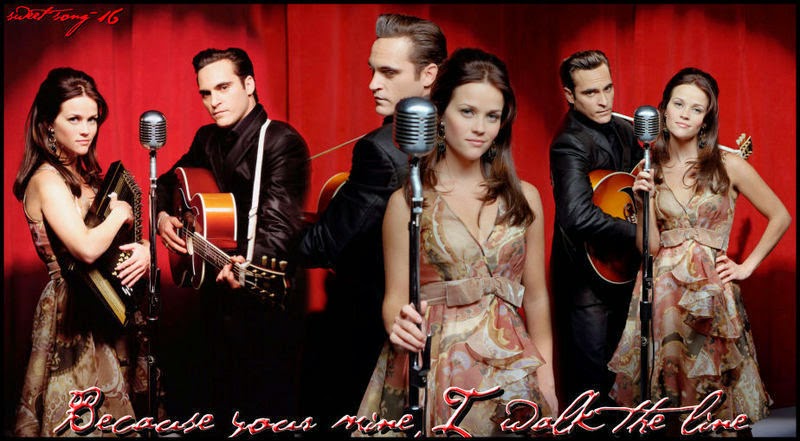 For the past five decades, the Academy of Country Music has recognized the top performers in the industry, culminating in the star-studded 50th Annual ACM Awards, coming to AT&T Stadium in Arlington, Texas this Sunday.

To gear up for the golden anniversary event, kick off your boots, set a spell in your easy chair and check out what the silver screen has had to offer country music fans along the same timeline.

Many country music movies, both good and bad, have been released over the past 50 years, but don’t worry—I’ve separated the wheat from the chaff and hand-selected the 10 best for your viewing pleasure, listed in order of greatness.

Exaggerated at times for dramatic effect, Walk the Line is essentially The Doors of country music movies. As with Oliver Stone’s rock masterpiece, in which Val Kilmer embodied the spirit (or at least the myth) of Doors frontman Jim Morrison, James Mangold’s tribute (of sorts) to The Man in Black virtually transformed its lead actor into a musical icon. As Johnny Cash, Joaquin Phoenix absolutely nailed the outlaw singer-songwriter’s onstage attitude, look and, most importantly, his voice. Equally great was Reese Witherspoon, who won an Academy Award for Best Actress as Johnny’s second wife, June Carter Cash. (Phoenix was nominated for Best Actor, but lost to Capote’s Philip Seymour Hoffman.) Rosanne Cash and other family members have dismissed Walk the Line as unrealistic, but as pure theater, it packs a powerful punch.

Based on Loretta Lynn’s autobiography, Coal Miner’s Daughter stars Sissy Spacek as the title character, a rags-to-riches phenom who grew up a dirt-poor Kentucky girl strumming a pawnshop guitar and skyrocketing to success as the Queen of Country Music. An incredibly versatile actress and a fine singer to boot, Spacek is as adept at playing Lynn as a young teen as she is at taking the stage—big hair and all—and singing her hit songs. The always reliable Tommy Lee Jones plays Loretta’s husband, Dolittle “Mooney” Lynn, who takes her on a tour through the South, stopping at every country radio station they could find to promote her music. Other cool casting decisions for the film include Beverly D’Angelo as Patsy Cline and The Band’s late, great drummer and singer, Levon Helm, as Loretta’s father. A must-watch for fans of classic country music.

The most challenging and complex film on this list, Robert Altman’s Nashville follows 24 self-absorbed characters (including Lily Tomlin as an adulterous gospel singer and Keith Carradine as a rock star) for five days in the Country Music Capital of the World, leading up to a political rally for populist candidate Hal Phillip Walker of the upstart Replacement Party. Altman and screen writer Joan Tewkesbury, creating the film in the immediate aftermath of Watergate, tell “interlocking stories of love and sex, of hearts broken and mended…a wicked satire of American smarminess…a political parable…a tender poem to the wounded and the sad” (Roger Ebert). Lest the average country fan be turned off by such a lofty description, the film does contain more than an hour of music, including many songs that were written by the actors who sing them.

In Tender Mercies, Robert Duvall won the Best Actor Oscar for his portrayal of Mac Sledge, a down-and-out country singer who used to be famous but is now working at a motel in a small Texas town. Said motel is run by Rosa Lee (Tess Harper), a widow who, of course, helps Sledge get back on his feet. Naturally, he marries Lee and forms a bond with her son. The quiet, low key story is far from original, but it works as a stirring tale of redemption and hope, thanks in large part to Duvall’s excellent performance. Duvall even wrote two of the songs that he sings in the film: “Fool's Waltz” and “I’ve Decided to Leave Here Forever.”

Based on a novel by Thomas Cobb, Crazy Heart is indeed a movie with heart. Jeff Bridges plays Bad Blake, a tired old country singer who bears more than a passing resemblance to Kris Kristofferson.  He’s banged up and bruised from too much booze, a series of failed marriages and a life spent on the road. He now plays bowling alleys instead of arenas. As a song he wrote says, “I used to be somebody, but now I'm somebody else.” Things improve when he hooks up with a cute young newspaper reporter (Maggie Gyllenhaal), but he still must battle the bottle and his ego, the latter of which is put the test when he opens for a man he used to mentor. What makes the film work is Bridges’ seasoned singing voice and his overall believability in the role.

In Urban Cowboy, John Travolta ditches the disco ball and white three-piece suit of Saturday Night Fever (1977) in favor of a mechanical bull and black Stetson. The former Sweathog plays West Texas country boy Bud, who moves to Houston to work with his Uncle Bob (Barry Corbin) on an oil rig. Rowdy night life takes center stage, however, as Bud hangs out at Gilley’s honky-tonk, where he looks sharp in his fancy duds, dances and drinks the night away, and meets and marries the fiercely independent Sissy (Debra Winger), who asks the immortal line, “You a real cowboy?” Although Urban Cowboy is dated in some respects (modern viewers will cringe at the way Sissy gets slapped around), the redneck melodrama throughout the film is highly entertaining. Appearances by Mickey Gilley, Bonny Raitt, and the Charlie Daniels Band add to the fun.

While no one will mistake Pure Country for The Maltese Falcon, George Strait fans will surely enjoy this straight-ahead, farm-fed yarn. Strait, in his acting debut, plays Wyatt “Dusty” Chandler, a hot country music star who believes that elaborate stage gimmicks—smoke, lasers, exploding bombs—are taking center stage over what truly matters: the music. As such, Dusty shaves his beard, cuts off his trendy (for 1992) ponytail and traipses off for greener—or at least grittier—pastures, namely the small farm town where he grew up. There he takes a job as a hired ranch hand and falls in love with a little filly (Isabel Glasser). Despite its aw-shucks charms, Pure Country bombed at the box office, but Strait himself laughed all the way to the bank as the movie’s soundtrack became (and remains) his best-selling studio album. Followed by: Pure Country 2: The Gift (2010).

Payday follows 36 hours in the life of pill-popping, Wild Turkey guzzling, honky-tonk haunting Maury Dann, a country singer who sleeps with his fans in the back of his chauffeured Cadillac limo. Played by Rip Torn, who does his own singing, Dann is clearly out of control, as a line from the movie’s theatrical trailer suggests: “If he can’t smoke it, drink it, spend it or love it, forget it.” Torn’s wild and wooly character isn’t exactly sympathetic, but it’s fun to watch him descend into the inevitable abyss that excesses of this type inevitably lead. The low-budget road picture had a limited theatrical release, meaning many filmgoers of the era missed out on the movie’s humor and voyeuristic pleasures. Luckily, it is now readily available on DVD.

One of the terrible tragedies of popular music, the great Patsy Cline, who helped define the Nashville sound of the early 1960s, died in a plane crash on March 5, 1963, when she was just 30 years old. She left an indelible legacy, however, with such hits as “Crazy,” “I Fall to Pieces,” and “Sweet Dreams,” where, obviously, this film got its name. Jessica Lange, looking ravishing in the role, portrays the famed contralto-voiced diva, but elected not to try and sing herself. Rather, she lip-synched along to the original songs, which works well thanks to Cline’s strong voice and Lange’s impassioned performance. Ed Harris holds his own as Cline’s second husband, Charlie Dick, a charming but alcoholic print operator who grows jealous of her success. Sweet Dreams is far from the greatest biopic ever made, but Cline’s music and Lange’s beauty and grace make it well worth watching.

No country music list of any kind would be complete without Texas icon Willie Nelson, who is also a very good actor. In Songwriter, he plays Doc Jenkins, who teams with his old buddy Blackie Buck, played by Kris Kristofferson. The dynamite duo aim to get the upper hand on Rodeo Rocky (Richard Sarafian), who has signed Doc to a wretched recording deal that nowhere near compensates Doc for his titanic talents. While not as well-known as Honeysuckle Rose (1980), which also starred Nelson, Songwriter is a better, more substantive film (though both are good fun). Especially entertaining are the musical performances by Nelson and Kristofferson, both solo and together.