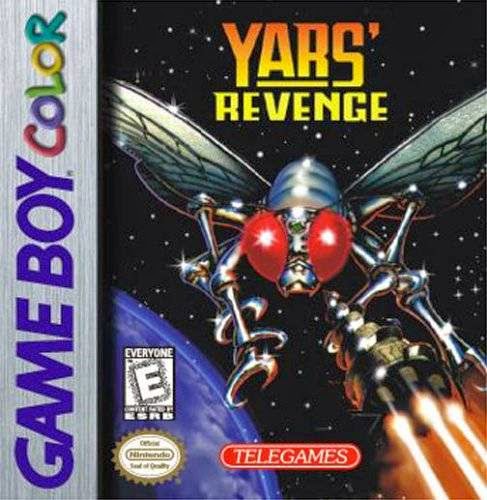 I wrote this review back in 1999, when the game first came out and I was writing for the late, lamented All Game Guide. The company would mail me games, and I would play them and review them. After a couple of weeks, I would have to send the games back. It was a fun job while it lasted.
Yars’ Revenge
Game Boy Color 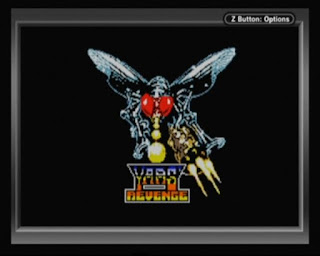 The retro-gaming trend continues as Yars' Revenge, the Atari 2600 classic from 1982, makes its way to the Game Boy Color. In both games you maneuver (in all directions) a mutant space fly named Yars around the screen.

Your primary objective is to break a path through a Shield on the right side of the playfield and destroy the Qotile therein. Each Shield is made up of cells; you can destroy these cells by firing at them with Energy Missiles or by devouring them on direct contact. The Shields come in two shapes: arches and shifting rectangles.

While Shield cells can be destroyed with simple Energy Missiles, of which you have an unlimited supply, the destruction of a Qotile base requires the use of the Zorlon Cannon. To gain access to this incredibly powerful incendiary device, you must eat five Shield cells or fly over the Qotile to activate the cannon, then fly to the left edge of the playfield to load the cannon. 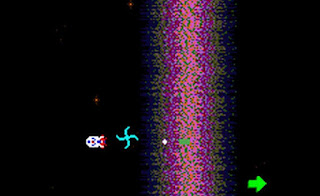 Once loaded, the weapon appears on the left side of the screen and moves in a direct (vertical) line with Yars. To use the Zorlon Cannon, aim it at the Qotile, fire and fly out of the way. If your shot makes contact with the Qotile, you score points and advance to the next screen. While you are flying around the screen trying to destroy the enemy, Destroyer Missiles, which appear one at a time, will pester you. Avoid them or be destroyed. Periodically the Qotile will assume the shape of a Swirl and come after you. You can destroy this Swirl with the Zorlon Cannon by hitting it either in its base location or in mid-air. Or, you can try to avoid the Swirl altogether.

Running vertically along the center of the playfield is a colorful and glittering pathway called a Neutral Zone. While in the Neutral Zone, you cannot operate fire commands or be harmed by Destroyer Missiles. However, you can still be destroyed by a Swirl.

The Game Boy Color version of Yars' Revenge features enhanced, updated graphics. Other additions to this version include more than 250 levels with password codes, bonus rounds involving a high-speed chase through an asteroid field and new enemies, such as Shield Builders and Zone Guardians.

At a time when the PlayStation, Nintendo 64 and Dreamcast make the Atari 2600 look like some strange relic from a distant past, along comes Yars' Revenge for the Game Boy Color, programmed by Mike Mika. Perfectly suited for older games that are smaller in scale than their futuristic cousins, the Game Boy Color is home to numerous Arcade and console classics. Count Yars' Revenge as one of the system's best. 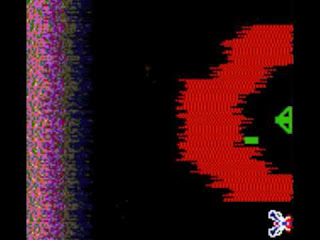 The first question most retro-gamers have upon hearing of an old favorite being converted to a modern system is this: is it faithful to the original? With Yars Revenge, the answer is an unqualified YES! While there are a few differences between the original and the new game, they are nothing for purists to fret over. In fact, most of the additions to the new game add to the fun -- most notably, the level progression and new enemies.

Being able to save your progress via password and advance through a whopping 250+ levels gives you reason to take your Game Boy Color wherever you go and try to get further and further into the game, whether you are playing for an hour or two or in small chunks of time; trying to get past a tricky level in Yars' Revenge while standing in line at the bank will make you wish there were more people in front of you.

The new enemies are certainly a welcome addition to the Yars' Revenge formula. After advancing 30 or so levels, you will want additional challenges. Instead of inserting generic characters into the game that would simply kill Yars on contact, the designers were clever enough to give the new enemies specific tasks: rebuilding the Shields and stunning your character and robbing him of his stored energy.

The biggest structural difference between Yars' Revenge for the Game Boy Color and the original is that the new game has a partially scrolling playfield. This helps compensate for the small screen size of the handheld system. Some may find this distracting, but it is a necessity. Luckily, the designers had the foresight to insert a moving arrow along the right side of the screen. This helps you aim your Zorlon Cannon when you are trying to shoot the Qotile.

Another unique aspect of this version of Yars' Revenge is the high-speed chases through the asteroid fields. This is handy for gaining extra lives, but the missions themselves are boring. Perhaps some shooting action similar to that found in Asteroids would've helped. This is just a small gripe, though, and is insignificant in the scheme of the game's more than 250 levels.

I was pleased but not surprised when I found out that Yars' Revenge was being released for the Game Boy Color. Of the hundreds of games that were available for the Atari 2600, Yars' Revenge is one people still (as of 1999) talk about. There are many reasons for this: the annoying (in a good way) Destroyer Missiles that keep you from sitting in one place and mindlessly firing; excellent controls that keep the game fluid and untarnished by age; an ingenious weapons system that requires you to perform several steps prior to firing your mighty Zorlon Cannon; and strategic (but not overly so) gameplay that requires you to be proficient in aiming, shooting and flying.

Luckily for Game Boy Color owners with a fondness for the classics, this updated edition of Yars' Revenge keeps everything that made the original great while adding just a dash of modern flavor.