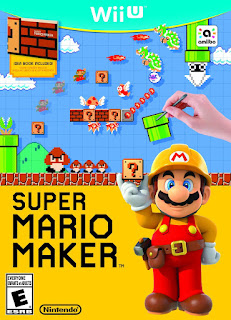 Click HERE to check out my fall video game preview in the online edition of the Fort Worth Star-Telegram. Or, you can simply read it below:

This fall is shaping up to be one of the most robust video game seasons we’ve ever seen, especially in terms of potential blockbusters and highly anticipated sequels.

A virtual arcade full of top-tier titles is headed our way, from Metal Gear Solid V: The Phantom Pain (Sept. 1), the latest iteration of the popular stealth series, to Tom Clancy’s Rainbow Six Siege (Oct. 13), inspired by the works of the late author, to Call of Duty: Black Ops III (Nov. 6), the next entry in the ubiquitous first-person shooter franchise.

Here are nine more A-listers that are guaranteed to keep your thumbs busy, your adrenaline flowing and your wallet empty. As always, release dates are subject to change.

Have you ever dreamed of designing your own Mario games? Now you can without going to programming school. Simply grab a copy of Super Mario Maker, which lets you create, play and share a virtually endless number of levels. The only limit is your imagination as you use the Wii U controller touch screen to place such elements as blocks, enemies, and pipes wherever you want, including the creation of non-traditional combinations. There are different themes/styles to work with: Super Mario Bros., Super Mario Bros. 3, Super Mario World, and New Super Mario Bros. U.

If you simply want to jump straight into the action, you can play levels created by Nintendo and by other gamers around the world.

This year marks the 10th anniversary of the “Forza Motorsport” series, and what better way to celebrate than with the release of a new game? In Forza Motorsport 6, you can collect and race more than 450 Forzvista cars, each of which is customizable to your liking. Authenticity is the order of the day as you compete in photorealistic races on 26 different tracks, some that feature up to 24 drivers at a time.

The single-player campaign mode boasts more than 70 hours of gameplay content, and you can race a buddy head-to-head in two-player split-screen action. New to the series is League play, along with nighttime driving and rain physics that mimic their real-life counterparts.

Once a cornerstone of any party where mere karaoke was considered as unfashionable as wearing  a lampshade over your head, rhythm games like Guitar Hero and Rock Band died out three to four years ago, relegating thousands of play microphones and plastic guitars to the bargain bins of thrift stores everywhere.

With Rock Band 4, Harmonix hopes to revitalize the faded fad by tapping into our narcissistic tendencies. Instead of simply following along with the on-screen prompts, budding rock stars can improvise their own guitar solos, drum fills and vocal gymnastics. In short, players can add more of their own personality to the game, which sounds like fun (narcissistic or not). There are 60 new songs built-in, plus more than 1,500 downloadable tunes available for purchase from the in-game Music Store.

If you enjoyed Kirby’s Epic Yarn for the Wii, you should get a kick out of Yoshi’s Woolly World for the Wii U, a colorful side-scrolling platformer set in a world of yarn and cloth. As with the “Yoshi’s Island” series, the titular dinosaur can use his tongue to swallow enemies. However, instead of producing eggs to throw, swallowing enemies creates balls of yarn, which can be used to create platforms, tie up enemies and much more.

Available in Europe since June, Yoshi’s Woolly World, which includes two-player cooperative action, is easy to beat when played straight through. However, it offers special challenges when you try to find all the items, some of which are hidden in fiendishly clever places.

Each of the three players, controlling a different colored Link (blue, green, or red), works together to battle enemies and solve puzzles, including those that require gamers to form a three-Link totem to reach enemies on a higher plane. In one-player mode, you can use the touch screen to control doll-like representations of the other two Links, who are mindlessly at your command. A competitive Coliseum battle arena mode is included as well.

“Halo,” one of the industry’s premiere first-person shooter franchises, returns with Halo 5: Guardians, which developer 343 Industries promises to be the biggest game in the series. In Campaign mode, gamers play as Master Chief and Spartan Locke across three vast new worlds, with Locke in hot pursuit of MC’s rogue Blue Team.

New modes of play include Arena, which is four-on-four action created with professional eSport tournaments in mind, and Warzone, an epic battle in which two teams of 12 compete on massive maps. If you haven’t played Halo since the original Xbox game (Halo: Combat Evolved) came out way back in 2001, it may be time to jump back on the proverbial bandwagon.

Surpassing even Ms. Pac-Man, Lara Croft is the most prominent female protagonist in video game history, inspiring the creation of action figures, comic books, paperback originals, theme park rides, feature films and more. She debuted in 1996 on the groundbreaking Tomb Raider for the PlayStation and Sega Saturn and has raided more tombs than Indiana Jones.

In Rise of the Tomb Raider, which takes place after 2013’s Tomb Raider reboot, Croft is at it again, using a wily combination of stealth, brains, athletic ability and weaponry (bows and arrows, a hunting knife, a pistol, a climbing axe and the like) to explore exotic environments, solve dangerous puzzles and survive against hostile humans and animals.

Star Wars and the Atari 2600 both launched in 1977, but an officially licensed Star Wars video game didn’t hit store shelves until 1982, when Parker Brothers released Star Wars: The Empire Strikes Back for Atari’s venerable console. In that game, all players did was pilot a snowspeeder on Hoth, shooting missiles at Imperial Walkers.

Now, more than 100 Star Wars video games later, “We’ve Come a Long Way Baby,” as Loretta Lynn once sang. Star Wars Battlefront, which is a reboot of the “Star Wars: Battlefront” series, lets players engage enemies on a variety of planets (including a new one called Sullust), pilot airborne and ground-based vehicles, wield blasters and light sabers, encounter R2-D2, C-3PO and other popular characters, and much more. The force will be with you as you play as a member of the Rebel Alliance or the Empire.

Set several years after Just Cause 2, Just Cause 3 once again puts players in the role of Rico Rodriguez, who has returned to his homeland (Medici, a fictional Mediterranean island) to thwart a brutal dictator named General Di Ravello. The chaotic, over-the-top action, which takes place among caves, harbors, prisons, military bases and the like, has been tweaked to let players wreak more havoc more efficiently and more dramatically than in previous games in the series.

Rodriguez’ grappling hook and parachute are more versatile, his C-4 explosives are unlimited and he’s equipped with a new wingsuit that lets him glide across the land very quickly. He can also commandeer a number of vehicles, including helicopters, speedboats, sports cars and tractors.

As if those nine weren’t enough, here are nine more big-budget games to look forward to this fall: