Guest blogger Spencer Blohm drops by BrettWeissWordsofWonder with another article. Take it away, Spencer! 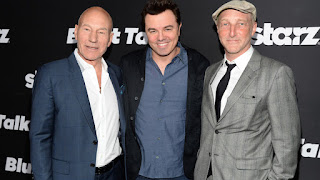 Just like that, Sir Patrick Stewart jumped from the stage of Hamlet to hamming it up viral Internet videos. Stewart has been acting since the ripe young age of 15, enthralling audiences in Shakespearian dramas as well as on screen in Star Trek: The Next Generation and the popular X-Men series. He’s heretofore been largely averse to comedy.

That is, until recently. Now in his seventies, Stewart has decided to disseminate his charm across all forms of social media, doing so with the help fellow X-Men cast member and distinguished member of the British Empire, Sir Ian McKellen. Participating off-the-wall skits for late-night comedy shows and voicing characters on Seth MacFarlane hits Family Guy and American Dad!, Stewart has found a second life embracing his funny bone.

In Blunt Talk, the second pairing of Stewart and MacFarlane begs the question, why comedy and why now? Stewart seems not to be overthinking it. Even in the face of absurdism, Patrick Stewart follows one basic rule. "I just believe in saying the lines with conviction," he says. In a recent interview with Time, Stewart said that he enjoyed working with MacFarlane and doing the outrageous bits and voice-over work. It was a no-brainer when MacFarlane came to Stewart with a live-action sitcom.

Blunt Talk is written by Jonathan Ames, best known for his series Bored to Death. Inspired by journalists like Piers Morgan (and a healthy dose of Orwell), Ames formulated the premise of the show and wrote the part of Walter Blunt specifically for Stewart. Before one scene was even shot, Starz saw the potential and ordered two full seasons.

In the role of Blunt, a British journalist and former soldier who comes to America for a shot at cable news stardom, Stewart comes in full force. In the wild premiere episode, Patrick Stewart/Walter Blunt makes headlines himself when he goes on a bender and assaults a police after being caught with a transvestite prostitute (among other things). Instead of reporting the news, he quickly finds his own face on cable news channels and among Bill O’Reilly’s talking points.

Further antic ensure when we meet the rest of zany people in Walter Blunt's life. His right-hand man is Harry Chandler, a fellow soldier who was under Blunt's command. Actor Adrian Scarborough fills in this role - in the States, he may not be well-known, but Scarborough has been acting on British television for a while now. The rest of the cast is rounded out by Blunt's news team and various lackeys.

So far, Season One is admittedly a bit perplexing. While the novelty of watching Patrick Stewart not-act quite like Patrick Stewart is fun at first, it taps itself out within the first 15 minutes. Seeing the refined and dignified actor chatting up a sexually ambiguous hookers and aiming vitriol at ex-wives is a change of pace, and not a totally unwelcome one - but in the hands of Ames and McFarlane something is amiss. The concept of a big-name actor behaving badly has been done before, and even though audiences love nothing more than watching a superstar’s career crumble, this show misses the mark. But it is by no fault of Stewart. He could charm his way out of a snake pit.


With two seasons already ordered, MacFarlane and Stewart still have time to find their groove and settle in for a long ride. The first two episodes (streaming on Starz, check with your satellite tv provider for details) have, if nothing else, whet our appetites for more Stewart, and ignited hopes that he might be able to turn this into something worthy of his prodigious talents.
Posted by Brett at 3:43 PM