I Was a Teenage Concert-Goer -- Or, How I Met Ozzy Osbourne & Paul Stanley 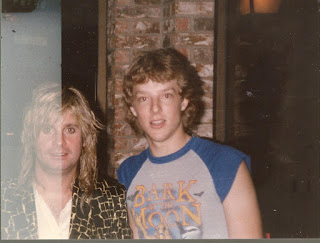 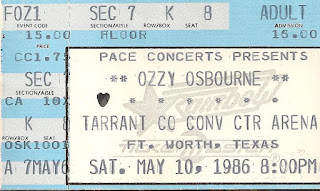 During the early-to-mid 1980s, when I was in high school, I was a terrible student. I wasn’t a slow learner, and I wasn’t disruptive, I was just preoccupied with things I thought were more fun than studying, such as basketball, video games, and the opposite sex. My senior year I nearly flunked English, which is ironic considering the fact that I now write for a living.

Along with shooting hoops, shooting alien invaders, and shooting the breeze with any good looking girl who would talk to me, I loved rock music, an obsession that went beyond merely listening to records in my room and blasting the radio in my car. My friends and I were addicted to the experience of seeing and hearing our favorite bands live and in person. 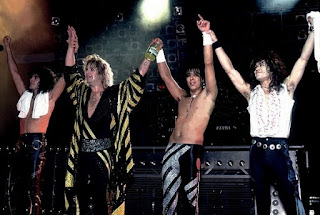 Between 1982 and 1985, the year I graduated, we went to more than 30 big-time, arena-based shows, including such popular acts as Elton John, Stevie Nicks, Iron Maiden, Styx, Bon Jovi, Eric Clapton, Dire Straits, and Foreigner. We also sat out in the boiling heat every summer at the Texxas Jam (a.k.a. the Texxas World Music Festival). Hosted by the Cotton Bowl in Dallas, the Texxas Jam was the type of post-Woodstock, post-Altamont, one-day event that grew out the early ’70s, when cities began outlawing weekend-long festivals.

Just as merely listening to music wasn’t adequate, going to concerts didn’t quite fulfill our rock and roll fantasies, so my friends and I started hanging around after shows to try and meet the bands, a strategy that, surprisingly enough, was highly effective. On one particularly memorable occasion in 1986, we followed Ozzy Osbourne’s tour bus about half-an-hour outside of Fort Worth to a greasy spoon called The Iron Skillet. While the roadies transferred the luggage and other supplies to another bus, Ozzy, his band--including guitarist Jake E. Lee, who had taken the place of the recently deceased legend, Randy Rhoads--and a couple of security guys went inside. We stalkers followed closely behind. 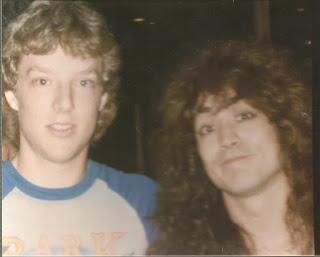 As Ozzy entered the restaurant, a waitress who was a dead-ringer for Florence Jean Castleberry from the TV show Alice exclaimed, “Ozzy Osbourne! Ozzy Osbourne! Oh my gawd! Ozzy Osbourne in my restaurant!” She proceeded to fawn and fuss over Ozzy and his bandmates, making a big show of getting their autographs: “Ozzy Osbourne! Ozzy Osbourne!” (This was decades before The Osbournes TV show, but the “Prince of Darkness” was a household name even then, thanks in part to several infamous events, including biting the head off a dove during a press conference and urinating on the Alamo.)

We approached Ozzy as well, but we were far too nervous and too “cool” to hoot and holler and otherwise make a big fuss, so we simply and sheepishly asked the former Black Sabbath singer if we could have his autograph, and if we could take a picture with him (in those days before everyone had a phone in their pocket, we always made sure to take a loaded camera with us to concerts). Ozzy, appearing dazed and confused—the word “sobriety” was not yet a part of his vocabulary—complied, and we had a great story to tell at work the next week, with photographic proof of our encounter.

Part of what made the story great is that I brazenly asked Ozzy as he was leaving the restaurant if he wanted to play Pac-Man (as with many establishments of the era, there was a mini-arcade in the lobby). Unfortunately, the “Godfather of Heavy Metal” declined, saying in his distinctly British accent, “I don’t play.”

During that golden age of metal, my concert buddies and I also met the guys in Metallica, W.A.S.P., Ratt, and Queensryche, along with frontman Paul Stanley and drummer Eric Carr from KISS. This was when the band was touring without their patented makeup for the first time. Needless to say, we got their autographs and snapped photos. 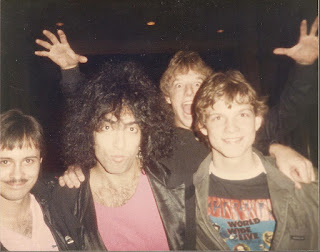 Regrettably, during the late 1990s, when eBay was new and exciting, I sold all my autographs, which were on scraps of paper we scrounged from hotels and restaurants—we rockers apparently weren’t savvy enough to bring albums or something more substantial to sign. I sold Ozzy Osbourne’s signature for $50, Paul Stanley’s for $35, and Eric Carr’s for $50. (The reason Carr’s autograph brought more than the more famous Stanley is that Carr, Peter Criss’s original replacement, had passed away.)

I went to many more concerts throughout the 1980s and into the early ’90s, but having kids and tending to the responsibilities of being a married man slowed my concert-going considerably by the mid-1990s. Plus, concerts had priced me out of the market. The first show I wanted to go to, but didn’t because of the expense was the Eagles Hell Freezes Over Tour, which came to Texas Stadium in Irving (where the Dallas Cowboys used to play) on July 3, 1994. Tickets were a then-shocking $50 to $120 each.

I rarely go to concerts these days (I settle for watching cover bands in bars—pathetic, I know), and when the Rolling Stones announced a few months ago that they were coming to the AT&T Stadium in Arlington (where the Dallas Cowboys now play), I barely gave it a thought, despite the fact that they’re one of my favorite bands. I knew that the price for a pair of tickets—even in the nosebleed section—would be enough to pay my electric bill or car payment for the month.

As fate would have it, I ended up going to the show anyway, and it was awesome.

Two weeks before the Stones concert, I called an old friend—one I used to go to concerts with—to come over and fix my broken garage door, which he did for the price of lunch at a nearby restaurant. When I mentioned that the Stones were in town, he said, “Let’s go.” When I told him it was too expensive, he said that if I would drive and buy food, he would pay for the tickets ($150 each) and the parking ($50). I quickly agreed, knowing this would probably be my only chance to see the “World’s Greatest Rock Band,” and being super excited at the prospect of once again seeing a real rock concert.

Our seats were near the back of the stadium, but we had a great view of the band, thanks to giant screens behind the stage. Also, the sound was excellent, despite the massive size of the venue. I was a little concerned that the Stones were too old to rock—Mick Jagger and Keith Richards are 71, Ron Wood is 68, and Charlie Watts is 74—but they are still terrific after more than a half-century of performing. Watts kept a strong, steady beat on the drums while Richards and absolutely Woods killed it on guitar. And Jagger was seemingly ageless, prancing about the stage the entire show like a man in his 20s, his voice as strong as it was during the 1970s.

In short, I thoroughly enjoyed the show, so much so that if the Stones were to come back next year, I would strongly consider going again—even if I had to buy my own ticket.

While I do indeed have another rock concert under my belt, I don’t have another ticket stub in my collection—our tickets were printed out on computer paper. This got me to pondering the collectability of vintage ticket stubs. The next day after the show, I hopped on eBay and did some searching of completed auctions, only to discover that ticket stubs from the 1980s are only worth around $3 to $10 each, depending on the band, the condition, and a few other factors.

So I’ll probably just hang on to my old ticket stubs because the memories are worth far more than the money I could make on them. I may even keep the computer printout for the Rolling Stones concert as well. After all, it’s not every day that I get to go to a rock concert, especially one featuring a legendary band.
Posted by Brett at 9:15 AM