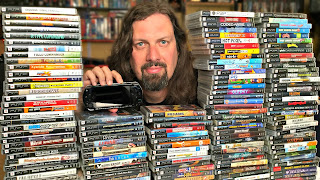 Gamer and hard rock music fan Metal Jesus is a super successful content creator for YouTube, having recently passed the 300,000 subscriber mark. In advance of Retropalooza, occurring at the Arlington Convention Center Oct. 1-2, he was kind enough to answer a few questions about his awesome video game channel, MetalJesusRocks.

WEISS: Describe what you do on your channel to someone who has never seen any of your videos.

METAL JESUS: I am a long-haired rocker dude who runs a popular YouTube channel dedicated to retro gaming with a heavy metal soundtrack. With the help of the Seattle gaming community, I cover Hidden Gems, Buying Guides as well as the popular I HATE U series, Gamer Eats and much more. I was also an employee at mega publisher Sierra On-Line in the ’90s, and I bring my love of big box PC gaming to my channel as well. New videos on Tuesday and Friday every week! 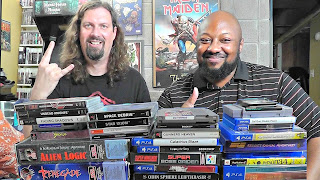 BRETT WEISS: When and why did you come up with the name Metal Jesus?

METAL JESUS: I worked a corporate job with a lot of people in cubicles and button down shirts. However, I typically wear rock t-shirts (just like my videos!) and I had thousands of rock and metal songs on my computer that was shared out for anybody to listen to. One day in a meeting, a fellow coworker called me “the Metal Jesus” and it just stuck!

WEISS: When did you first start making YouTube videos, and what got you into it?

METAL JESUS: I started doing YouTube seriously in 2010. That’s when I decided that YouTube wasn’t just a “hobby,” but something I was going to consider like a second job, which it is. I have been a lover of shooting and editing video since I was a kid and now I can fulfill that dream on YouTube. But the best part is that people seem to appreciate it, and for that I am eternally grateful.

WEISS: Are you inspired by other forms of media or other content creators?

METAL JESUS: I pull inspiration from almost everything: film, TV, documentaries, other YouTube channels, commercials, music videos. A specific example is a gaming party video I shot a few years ago. When it came time to edit it, I watched a bunch of MTV shows to see how they edited random party footage. They did things like speeding up and slowing down footage, crazy filters and just the pacing of the cuts. I used that to give me some direction on how I would take my video, and it worked pretty well.

WEISS: Why travel from Seattle to North Texas to appear at a video game convention?

METAL JESUS: I have known the Game Chasers for a while now, and they invited me to come down this year and check out their expo. I’m excited to meet new people and buy from new vendors!

WEISS: Have you been to North Texas before?

METAL JESUS: My wife is from Dallas/Fort Worth, so yes, we’ve visited her family a few times before. Texas is quite different than Seattle, but I love traveling, so it’s exciting to get away from home for a while.

WEISS: Are you going to have a panel at Retropalooza?

METAL JESUS: I’ll be doing a panel with Brittney BlondeNerd at the expo in regards to social media and YouTube. It should be very entertaining and informative for those people looking for some insight into doing YouTube for a living. I’m excited for it!

WEISS: Anything else you care to share with Dallas/Fort Worth gamers?

METAL JESUS: Bring your vintage ’80s and ’90s big-box PC games to the show, because I want to buy them from you!