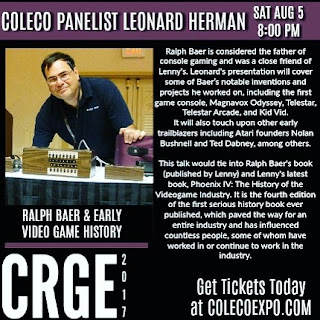 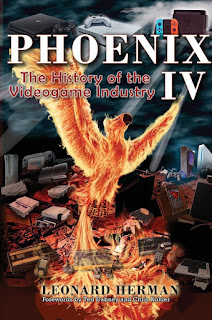 In a world that was fair and just, Leonard “The Game Scholar” Herman would be a household name, or at least as well-known as the more popular YouTubers. Not only did he write ABC to the VCS, the first comprehensive Atari 2600 book, he penned Phoenix, the first serious book on the history of video games. Alas, the world is unjust, but Lenny labors on (Phoenix is now in its fourth edition), and most everyone with a deep knowledge of retro gaming and video game history holds “Lenny the Legend” (as I and certain other gaming writers have taken to calling him) in high regard.

As a guest at the recent Coleco Expo in New Jersey, which has been getting gleefully skewered online, even by people who weren’t there, Leonard has a first-hand account of what it was like at the show. He admits that the turnout was fairly low (and my impressions are that there wasn’t nearly enough actual Coleco stuff there), but he had a nice time regardless. Without further ado, here’s Lenny's take on the event: 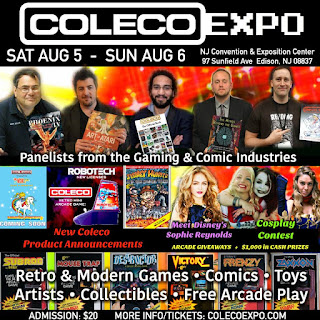 I first met Chris Cardillo at Toy Fair, 2016, during the Coleco Chameleon fiasco. We became Facebook friends, and I was happy when he disassociated Coleco from the Chameleon after it was definitively discovered that the console on display was a fraud. I assumed he was above board, and I personally have had no problems with him since then to change my opinion. So when I learned that Coleco was going to have a show in Edison, NJ, I immediately contacted them to sign up. Ever since Phoenix IV came out in November, it has been difficult for me to attend shows that are not within driving distance. The books are just too heavy to take with me on a plane and would be too expensive for me to ship. Then there's the added problem of having to ship them back home if I don't sell them all. So the idea that there was going to be a convention only 20 minutes from my house really appealed to me. 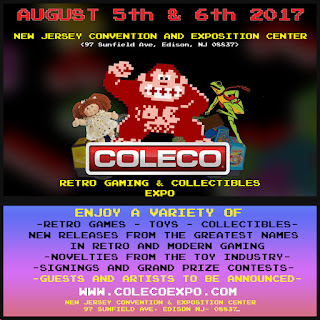 Unlike other people who would be at the show, I was not invited, and therefore would have to pay for a table. Unfortunately, I inquired for details and learned that the tables were very expensive--much too expensive for a first-time unproven show.
Chris Cardillo contacted me several weeks later and asked if I was going to come, and I told him I wouldn't be and the reason why. He then offered me a table at a much reduced price and I agreed.
Over the next few months I received emails from Tina Cassano of Coleco about the show. I was mortified when I saw Facebook posts going out that showed the other writers who would be there, but there was no mention of me. And then Tina asked me if I wanted to give a talk. I agreed, only to discover that the best time they could give me was 8:00 p.m. on Saturday. I hadn't even been aware that the show would be open past five or six.
I asked how many people they were expecting, and she said there were over 2,000 pre-orders. Unfortunately I only had 45 books to sell. I was very optimistic and thought that I should at least have enough books for 5% of the attendees. So I ordered another 50 just in case. And I had three of the deluxe color copies, but I ordered an additional five, not really expecting to sell too many because they are so expensive.
So Saturday morning, August 5, I drove to the show. My friends, Rob Faraldi and Joe Mannarino, who both help produce my Game Scholar videos, agreed to meet me there to help out.
It turned out my table was not on the main floor. Instead, I was set up by the arcade machines, which were loud. Tina explained to me that after people entered, they would walk down a small hall and enter this room before entering the main hall. I was located next to author Patrick Hickey, Jr, who was between me and author Jeffrey Wittenhagen. I had never met either of the two before but we soon became good friends. And throughout the day Tim Lapetino and Antoine Clerc-Renaud hung around with us. At one point the four of them decided to do a panel together and asked if I wanted to join but I bowed out. 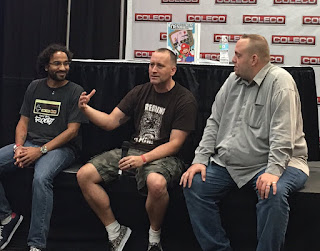 I did give my talk at 8:00, by which time I was tired. Then there were problems setting the projector. Because of this I don't think my talk about Ralph Baer and early videogames went to well. Even so, there were about 20 people in the audience, despite the time.
Was there a good amount of foot traffic at different times? Were there 2,000 people? I don't think so. Someone later heard that there were just 650 pre-orders.
That night I went to dinner with Tim, Jeffrey and Antoine. We had a great time together and decided that even if nobody showed up on Sunday, a day that is traditionally dead, we were going to continue having a good time.
The New Jersey Exhibition Center was huge, and so the aisles were wide apart. This gave it an appearance of being very sparse. If the coordinators blocked off some of the room and made the aisles narrower, then it would have appeared to be more crowded. I didn't walk around that often, but I saw at least three large booths that were selling old games and hardware.
On Sunday they moved our tables into the main room right next to the entrance. Again, there seemed to be traffic, which was good considering it was Sunday. I've been to many shows where Sundays were completely dead. I sold all of my hard cover books so I was happy.
I also met Tyler Bushnell (Nolan's son) on Sunday. He was cool and very outgoing. I offered to drive him to the airport after the show since I was going that way, and we had a great talk about his father and Ralph and Ted (Dabney).
I heard about the controversy regarding Chris and the community. I had been under the assumption that Coleco had banned homebrewers from using the Coleco and ColecoVision logos, which he had a right to do. I asked Chris about it, and he told me that there was one homebrewer that was producing a porn game, and Chris didn't want him using his logos, which I thought made sense. Later I learned how he was strong-arming other homebrewers. I have no opinion on this. All I could say that Chris and his staff were very cordial to us. They even had one girl who constantly came to us and asked if we needed anything.
If I knew about the controversy right before the show, would I have attended? Probably. I had money and books invested in the show, which I couldn't afford to lose.
In the end, was I glad I attended? Yes. I sold books and met new friends and contacts. Could the show have been better? Possibly. But I've been to shows that did a lot worse than this one. Did the show suffer because of the controversy? I really don't think so. How many additional people would have attended if there wasn't a boycott? I don't think whatever that number might be would have made much of a difference. ~ Leonard Herman
Posted by Brett at 5:28 PM