Land of the Lost - My "Routine Expedition" with Holly Marshall 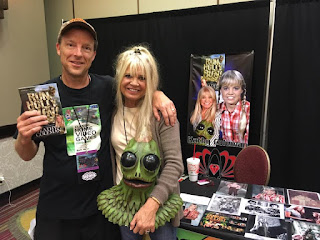 As a child of the 1970s, I was impacted by four television shows over all others: The Super Friends

, Star Trek, The Twilight Zone, and, most notably, Land of the Lost

The Super Friends, a Saturday morning cartoon featuring Batman, Superman, Wonder Woman, and other Justice Leaguers, sparked my interest in superheroes. More serious than the Adam West Batman show and more colorful and adventurous than Adventures of Superman starring George Reeves, The Super Friends lead me down the road of reading comic books, which eventually lead to my co-owning two comic book stores and writing for the Comics Buyer’s Guide, the latter of which was my introduction to getting published nationally on a regular basis.

Star Trek and The Twilight Zone, which I watched as reruns, cemented my love for science fiction, a genre that has influenced me in many ways, including my career path and outlook on life. I was introduced to science fiction via Lost in Space but fell in love it with through The Land of the Lost. 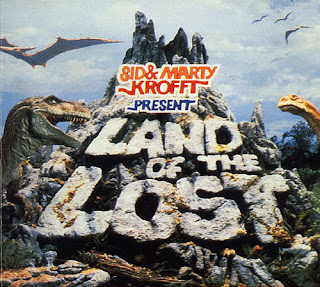 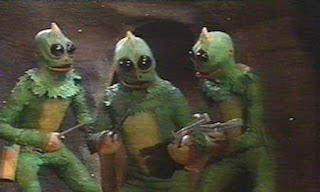 A show that sent my senses soaring, Land of the Lost ran on NBC Saturday mornings from 1974 through 1976. There were 43 episodes spread across three seasons. As the theme song goes, it’s the story of Rick Marshall and his kids, Will and Holly, who were on a “routine expedition,” river rafting in the Grand Canyon. An earthquake opens up and plunges them “a thousand feet below” to a mysterious world of stop-motion dinosaurs, furry Pakuni people, and bipedal reptilian cave dwellers called Sleestaks

(including one played by future NBA superstar Bill Laimbeer). The Sleestaks’ ineffectual arrows they would shoot at Rick, Will, and Holly never hit their mark, but the creatures looked and sounded scary to young children.

A typical episode would find our heroes, who had fewer amenities than Robinson Crusoe

(which is one of many things that made the original series much better than the 1991-1992 remake), gathering food, running from dinosaurs, and exploring their mysterious new world, including the spooky pylons, which held the secret to getting home. 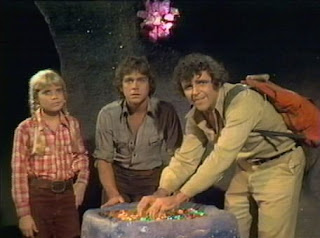 While Land of the Lost

was filled with fantasy and adventure, its literary scripts were what made it special. To give the program depth beyond typical kiddie fare, producers Sid and Marty Krofft (H.R. Pufnstuf, Sigmund and the Sea Monsters) commissioned a number of highly respected science fiction authors to write the scripts, including Ben Bova, D.C. Fontana, Larry Niven, Norman Spinrad, Theodore Sturgeon, and David Gerrold.

Such episodes as Fontana’s “Elsewhen,” featuring Holly meeting an older version of herself, and Niven and Gerrold’s “Circle,” where the writers explored the concept of a closed universe, blew my young mind.

Just recently, I discovered that “Elsewhen” is Kathy Coleman’s favorite episode of Land of the Lost. Coleman, who began in Hollywood doing commercials, played Holly on the show. Wesley Eure, who played Will, and who was a regular on Days of Our Lives during that time, cited “Circle” as his favorite, thanks to its clever ideas and concepts. 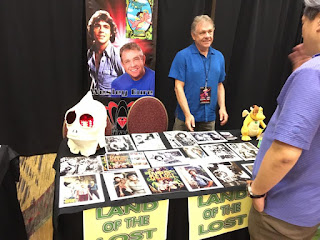 How did I discover these bits of trivia, you may be wondering? The actors told me when I asked them, of course!

Ms. Coleman and Mr. Eure were guests at a recent science fiction convention called Infinicon, which was in Addison, a suburb of Dallas. The event was held over a three-day weekend, and I decided to go on that Friday.

I arrived at the show in time to check out the vendor’s room prior to attending the Land of the Lost panel. As a collector of old and unusual items, I was disappointed by the offerings, which consisted mostly of art prints, crafts, cosplay weapons, and those ubiquitous Funko Pop toys.

But that hardly mattered—I was there to meet two of my childhood heroes.

The guests at the show, which also included Jed Rees (Galaxy Quest), Clive Revill (The Empire Strikes Back), and Anne Lockhart (the original Battlestar Galactica), were situated along a wall in the vendor’s room, so after looking around a bit, I casually strolled over that direction, trying not to appear too excited.

As a freelance journalist, I’ve interviewed many celebrities, but I was genuinely excited and even a little nervous upon meeting the Land of the Lost actors. Luckily, they were both super friendly, immediately putting me at ease. They smiled, shook my hand, and seemed genuinely appreciative of my interest in the show.

While meeting Wesley Eure was awesome—he was energetic and enthusiastic—I was especially interested in Kathy Coleman, who I had a bit of a crush on as a kid, and who was selling her autobiography, Run, Holly, Run!

, which I had promised to pick up for a friend. 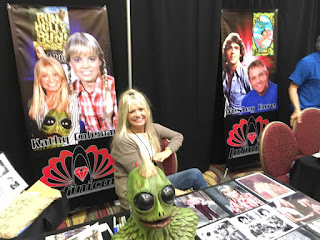 Kathy was selling signed copies of her book for $50 each. Since I’m not much of an autograph collector, and since the book only goes for $14.99 on Amazon, I decided to wait on getting a copy for myself, but buying the book for my friend had fringe benefits, namely getting my picture taken with Kathy. (In the old days, celebrities would sell their book for cover price and autograph it for free, but I digress…)

The person behind me in line got a signed book as well and began chatting with Kathy. After a time he walked away, and after a few minutes it dawned on her that he had forgotten to pay for the book. She was distressed over this, so I told her I would help search for the guy. We went opposite directions, and I found him—he had made an honest mistake and was on his way back to pay for it.

While she didn’t really need my help, it was totally surreal going on a “mission” with Holly from Land of the Lost. Even more surreal was later that afternoon when I was leaving the show. I went out the side door of the hotel, and Kathy was out there by herself, having a smoke. I said hello, and we began talking for another 15 or 20 minutes. It was bizarre and exciting, but also terribly sad. She relayed a very personal and painful story, which you can read about in her book, of inappropriate behavior by an adult cast member during season three. 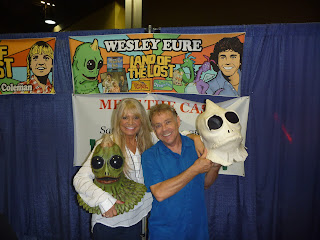 Luckily, the rest of the convention was upbeat and fun, including the Land of the Lost panel, which Wesley began by leading Kathy and the audience in singing the show’s theme song (which makes sense since he sang it originally), setting just the right mood for an hour of laughter and reminiscing.

Kathy and Wesley regaled the audience with interesting and amusing stories, such as the time the cast hired a masseuse for Wesley for his birthday, and when, in later years, they went searching for the elusive Spencer Milligan, who played their dad on the show. They also discussed the 2009 Land of the Lost

movie, which everyone in the room agreed was a major disappointment. 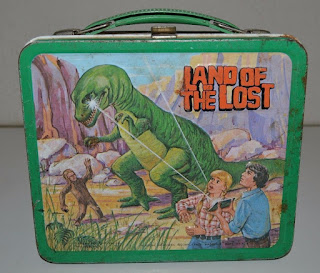 Meeting Kathy and Wesley revived my interest in Land of the Lost collectibles. I don’t own very many—just the DVD sets of each season, the Little Golden Book ($15), the Dynamite magazine ($10), and a set of three View-Master reels ($15)—but I was curious to see what else was out there, so I did a little hunting online. Here’s what a search of completed eBay auctions turned up:

And, of course, there were Funko Pops, but only of a Sleestak

and Enik (an intelligent predecessor to the Sleestaks). These go for $90 each because they were New York Comic-Con exclusives. I think I’ll pass on these, hop on Amazon, and go buy Kathy’s book, which I’ve been meaning to do ever since I got back from my wondrous trip to Infinicon. 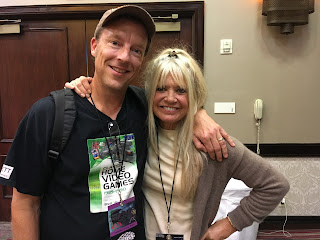