The Portland Retro Gaming Expo is the biggest and one of the best conventions in the country focusing on vintage video games. I had heard many great things about it over the years (the first one was in 2006), but I never had a chance to go until this year. 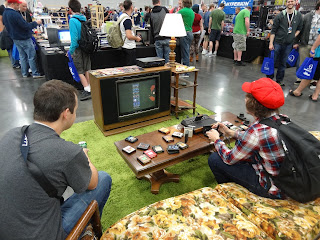 Held at the Oregon Convention Center Oct. 20-22, the event easily lived up to its billing—I had a great time and sold a ton of stuff.

But I’m getting ahead of myself.

Since I had never been to the Pacific Northwest, I decided to go to Portland a couple of days early and get in some vacation time. A gamer friend of mine, Delf Meek, thought this was a good idea, so we split a hotel room across from the convention center, from Wednesday through the following Monday. 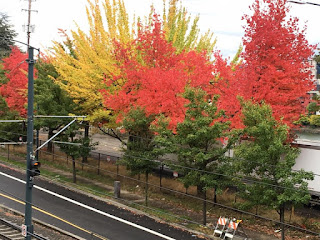 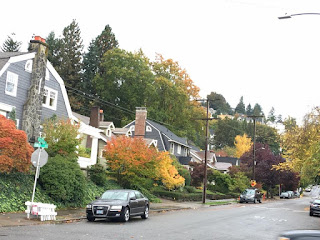 I love exploring new cities (and old cities—one of my favorite things to do is go cycling all over my home town of Fort Worth, Texas), so as soon as we checked into our hotel room, we set off on foot, hoofing our way past the Moda Center (where the Portland Trailblazers play), across the Willamette River, and into downtown, admiring the fall colors and beauty of the city in general.

In addition to sampling some craft beers, we scoped out the usual tourist spots, including Ground Kontrol Classic Arcade, which whet our appetites for the big show coming up, Voodoo Doughnuts, which is as colorful and as quirky as the city itself, and Powell’s City of Books, a three-story swathe of heaven measuring 1.6 acres. 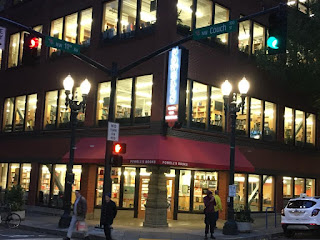 Powell’s has an amazing selection of new books (there are millions of stories within its three stories), along with vintage titles sprinkled throughout, but I didn’t find many bargains among the older used science fiction, performing arts, or movie tie-in paperbacks. The prices were certainly fair, but unlike my favorite haunt, Half-Price Books, a chain located primarily in the Midwest, none of these types of books were available for half of cover price (most were marked up considerably more). In short, I found plenty to read, but nothing to resell at shows or in my pop culture antique booth.

The next day we headed for the coast in a rental car. It rained most of the day, but we made the best of it, enjoying the winding roads, the rolling hills, the sprawling wilderness homes, the tall trees and, again, the fall colors—striking yellow, bright orange, impossible red. Our primary destination was Haystack Rock, an intertidal sea stack located on Cannon Beach, about an hour and a half from Portland. 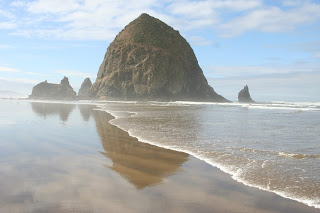 The monolithic rock, which can be seen in such films as Sometimes a Great Notion (1971), The Goonies (1985), and Kindergarten Cop (1990), is reachable from the beach at low tide, but on this rainy, windy, chilly day, we were content to see it from afar. It was shrouded in a foggy haze, but instantly recognizable.

We spent the next couple of hours exploring Cannon Beach, as well as the equally charming town of Seaside eight miles up the road. We enjoyed steaming hot bowls of clam chowder at a local restaurant and marveled over the dusty and fading, yet highly organized stacks of VHS videos in a rental store “straight outta” the 1980s called Universal Video. Other than a small DVD section, you’d never know this was anything but a time warp. There were thousands of movies for rent, including many big box videos and movies that have never been released on DVD. 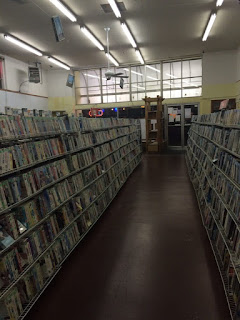 It occurred to Delf and I that since they had so many videos for rent, they might sell used games. The neon sign out front, which was obviously from the mid-late 1980s, said “Nintendo,” but we didn’t see any games in the store.

When I asked the guy running the place if they had video games, he said they did up until about two years ago when he noticed that older games had gotten valuable. After doing a bit of research, he sold the lot of them for $40,000 to a dealer (this may seem like an exorbitant sum, but if he had hundreds of games and they included original boxes, it’s entirely feasible). He said up until then he had been renting them for $2.50 each.

We also stumbled across a quaint little antique mall, where I drooled over two particularly cool pop culture artifacts: a Dragon’s Lair lunch box with thermos ($75) and a mint-in-package Mork from Ork Eggship Radio ($55) licensed from the popular TV show, Mork & Mindy (1978-1982).

Later that night, we got back to Portland in time for a tour of the Shanghai Tunnels, a group of passages located primarily underneath Chinatown. Online reviews were mixed for this tourist trap, but we decided to give it a shot. Unfortunately, a trap is truly what it was. Instead of a creepy good time, we stood around in a series of three different underground rooms and listened to a man drone on an on in a voice that was barely above a whisper. I think he was telling spooky stories, but I couldn’t really hear him. Lame.

The next day, Friday, umbrellas in hand, we explored more of the city, enjoying the river, the bridges, the ships, and the beautiful homes, making sure we were at the convention center by 3:00 pm. This was when the Portland Retro Gaming Expo arcade opened. Since I would be “stuck” at my booth most all of Saturday and Sunday it was nice that only the arcade was open Friday. I had a blast playing a variety of the classics, including Donkey Kong 3, Crazy Climber, and Lady Bug, along with some new pinball machines, such as Batman based on the old television series.

Then it was show time. 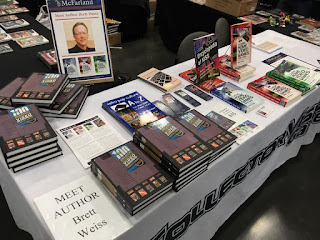 I arrived at the convention center a couple of hours before PRGE, giving me plenty of time to set up my booth and look around the showroom floor before the doors opened to the general public. Vendors were selling everything from common Sega Genesis cartridges to rare and valuable boxed NES (Nintendo Entertainment System) and Super NES games to gaming consoles from a variety of eras. A couple of dealers even had old paperback books and laser discs on display.

I grabbed a few odds and ends before zeroing in on a large tub of Atari 2600 cartridges sticking out from under a table. At first glance, it appeared to be the usual common fare, including such best-selling titles as Asteroids, Berzerk, Missile Command, Moon Patrol, and Space Invaders. Great games, but only worth about a buck or two apiece, which is what the guy running the booth was selling them for ($2 each, cheaper if you buy a bunch, which I did).

After a little digging, I discovered buried treasure (relatively speaking) among the commons, including a bunch of third-party titles worth anywhere from $8 to $12 each. The highlight was a pair of Xonox Double Enders, which are hard to find games you can insert into the Atari 2600 console on both ends, each end offering a different game. I found Ghost Manor/Spike’s Peak ($12-$15) and Artillery Duel/Ghost Manor ($40-$50). Another cool thing I grabbed was K.C.'s Escape!, a new homebrew game that is the third game in the "K.C. Munchkin" trilogy. 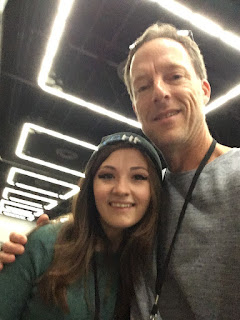 Even better than the video game pickups were the connections I made at the show with fellow content creators, including Seattle-area YouTubers Kinsey Burke, who’s just as perky in person as she is on her channel, John Hancock, whose passion for the hobby is obvious, Kelsey Lewin, who became an instant friend, and John Riggs, as nice a guy as you could hope to meet. I had corresponded with each of these talented folks online prior to the show, but it was great meeting them in person.

Also cool was seeing friends I’ve known for years, including fellow authors Leonard Herman (PhoenixIV: The History of the Videogame Industry) and Michael Thomasson (DOWNRIGHT BIZARRE GAMES: Video Games thatCrossed the Line). There were other gaming authors in attendance as well, including Tim Lapetino (Art of Atari) and Chris Kohler (Power-Up: How JapaneseVideo Games Gave the World an Extra Life), great guys all. This just scratches the surface of the friends and I saw and connections I made, so forgive me if your name’s not included—too many to mention them all! 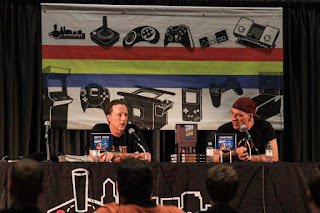 Show promoter Rick Weis had me out to PRGE as a guest, so it was incumbent on me to do a panel. I’m not a gifted public speaker (to put it mildly), but I do pretty well in a Q&A format, so that’s just what I did, thanks to my buddy John “Gamester81”Lester joining me onstage. We bounced some gaming history questions off one another, then threw it open to the audience, who asked some really good questions, making for a fairly entertaining panel. Only one or two people walked out, so I call that a win.

Thanks to my publisher, Schiffer, I had a copy of The100 Greatest Console Video Games: 1977-1987 to give away to the person who answered the question, “What and when was the last official release for the Sega Genesis?” The answer was the seemingly anachronistic Frogger in 1998, and the winner seemed genuinely excited to receive the book. 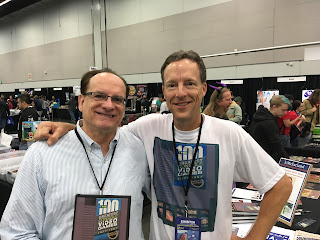 Speaking of genuinely excited and “100 Greatest,” I was super stoked when Atari 2600 programmer Garry Kitchen (Donkey Kong, Keystone Kapers) stopped by my booth to say hello and purchase a signed copy of my book. We had spoken at previous gaming events, but we discovered at PRGE that we both enjoy collecting vintage paperback books featuring cover art by the likes of Roy Krenkel, Frank Frazetta, Neal Adams, Ken Kelly, and Frank Kelly Freas, among others. I told him about Powell’s City of Books, but warned him that he might not find any bargains.


Unfortunately, I didn't have time to go to any of the Atari 40th anniversary panels, but I had a fantastic time manning my booth and talking to fellow gamers and readers who were familiar with my work. Based on the awesome time I had and connections I made, not to mention all the books and games I sold, I hope to make the Portland Retro Gaming Expo an annual excursion. In fact, I’ve already signed on to appear as a guest at next year’s show.
Posted by Brett at 3:31 PM