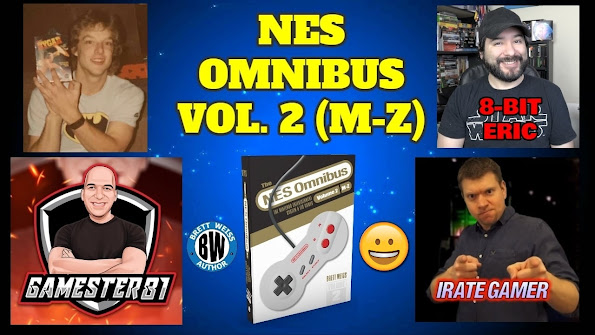 Yes, I can finally say that the book is available to everyone. US residents can order signed copies direct from me, and anyone can get the book on Amazon. Thanks to the pandemic, there were delays getting the book out, and then there were some other snags I discuss in my new video. Thanks to everyone for their patience! But I'm finally finished processing all the pre-orders and Kickstarters, so if you get your order in now, I can ship your book immediately! This has been a labor of love, and I'm so glad it's finally here for everyone to enjoy! I had some great contributing writers on this project, sharing their nostalgic NES stories, including 8-bitEric, John "Gamester81" Lester, Rob McCallum, Shane Stein (Executive Producer of Adventures in Game Chasing), Patrick Hickey Jr. (author of The Minds Behind the Games), and Chris "The Irate Gamer" Bores, among many, many others.

The book features reviews/synopses for every US release for the NES, plus author memories, insider insights from industry folks, quotes from vintage magazines, video game history, box art, screenshots, vintage ads, foreign NES releases, a beautiful centerfold with all your favorite NES characters, and more. Of course, it is the sequel to The NES Omnibus Vol. 1 (A-L), which featured a foreword by The Goldbergs creator Adam F. Goldberg.

In other news, it's also convention season! If you’re a promoter and would like to have me out as a guest at your show, please send me a message @ brettw105@sbcglobal.net. Here’s my updated bio if you are curious about my qualifications. I’ve done a bunch of shows and have taken part in some fun panels on video game history and retro gaming in general.

National columnist Brett Weiss has been a gamer since 1975 and a professional gaming writer since 1997. He’s the author of a dozen books, including The NES Omnibus Vol. 1 and 2, The SNES Omnibus Vol. 1 and 2, and The100 Greatest Console Video Games: 1977-1987. With his Classic Home Video Games series, he wrote the world’s first complete guides to numerous video game consoles, including the Atari 5200, Atari 7800, ColecoVision, Intellivision, Vectrex, Odyssey2, Nintendo Entertainment System, Sega Master System, Neo Geo, TurboGrafx-16, and Sega Genesis. He also wrote the world’s first and only encyclopedia about the rock band KISS.

A frequent guest at video game and pop culture conventions around the country, Weiss appeared in the 2021 documentary “Playing With Power: The Nintendo Story,” and he was in The History Channel’s Nintendo episode of “The Toys That Built America: Snack Sized.” He’s written for countless publications, including Game Informer, Fangoria, Filmfax, Robot Magazine, The Writer, Mystery Scene, The Comics Buyer’s Guide, Alter Ego, Back Issue, AntiqueWeek, Video Game Collector, Video Game Trader, Classic Gamer Magazine, Game Room, The Pingame Journal, and Old School Gamer Magazine. He’s also worked for AtGames and Opcode Games as a consultant, editor, and writer, and he’s the host of the quickly growing YouTube show, Tales from a Retro Gamer.

***Thanks to everyone for their support, their subs and views on YouTube, their book purchases, their reviews of my books, their kind words online and at conventions, and every other positive vibe you send me way. I couldn’t do it without you!
Posted by Brett at 9:59 AM