Foreword to My New Book, The NES Omnibus Vol. 2 (M-Z), by Rob McCallum 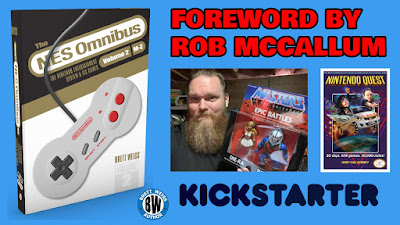 Filmmaker Rob McCallum did a bang-up job writing the foreword to my new book, The NES OmnibusVol. 2 (M-Z). It’s a cool essay that truly shows his passion for the NES. ENJOY!

Let’s be absolutely clear: the Nintendo Entertainment System is the best video game system of all time. No, this isn’t a fanboy nostalgic discourse about my toy being better than yours because I grew up with it and my era is better. No offense to the gamers of other generations or the ones from my generation that disagree with my statement, but I’m right and you’re wrong. If you don’t want to take my word for it, let’s quickly delve into the many reasons why the NES is the top gun of gaming consoles.

The NES came out at a time when technology existed that gave gamers many options that were closer to an arcade experience than earlier systems. NES players could consume game after game without suffering any graphical or auditory nausea while playing and see faithfulness in most of the arcade ports. But the NES didn’t necessarily need arcade ports to find its audience. Most of the console’s key memorable titles are exclusive to the library. A lot of these games are massive franchises today that have been ported to every possible device because they’re that good. The seeds of even the most recent release of those games are directly tied to the original NES versions.

No discussion about the NES is complete without delving into game design and gameplay. There’s is a delicate balance between making a game easy enough to pick up, lead the player through the experience, challenge them along the way, and do so with a compelling story that never deviates from the way in which you’ve taught the player to navigate the world before them. Whether it’s Super Mario Bros., Final Fantasy, Double Dragon, or Mega Man, the mechanics of getting through each stage, level, world or game was done so well that anyone in the family could pick up a controller and play. You can see this same philosophy decades later with Nintendo’s introduction of the Wii. If everyone can play, enjoy, and have fun, it’s a good game. You didn’t have to be an expert or wizard to play the NES (although some titles were notoriously difficult to beat), you just needed to put some effort in because conceptually everything was there to succeed to some degree in the majority of games for the console.

The soundtracks, theme songs, and memorable audio effects of many NES games stay in our heads days after the console has been turned off. This has nothing to do with the fact that the game(s) came out in the ’80s, but everything to do with excellent composition, design, and ingenuity. The limited audio resources when creating for the NES pushed the artists and game developers to get something that was evergreen and could stand the test of time. There are certainly great soundtracks and sound design for many games today, but nothing seems as iconic and alluring as the soundscape one finds when playing through the NES library.

Speaking of the library, I think one would be hard pressed to find a better ratio of good or great games to cannon fodder than the NES library. In my estimation, there’s at least one good game for every six games. Even if you wanted to be conservative and say there’s only one good game for every eight, you’d still find yourself with almost a hundred quality games to play for hours on end. It’s increasingly rare for a stat like that to get duplicated. Sure, not as many games were being created when the NES was around, but it’s not about quantity, it’s all about quality, and the NES has quality in spades.

Now, let’s turn our attention to this most impressive reference guide written by longtime gamer, author, and historian Brett Weiss. It’s actually more of a tome or spell-book because it’s so thoroughly crafted and woven with copious amounts of detail that will simultaneously turn the gears in your head and create new thoughts you never considered. Each entry packs detailed information, box art, screenshots, and all the pertinent info that can turn anyone into an expert in a short period of time. It functions as an incredible resource for all things NES, at least concerning games M to Z.

With this book, which I hope you’ll keep on your coffee table for all to see, you can flip through the pages and discuss the games, then set out on an adventure to find and play them—which is a further testament to the console’s appeal. As evidenced by things like this book, the NES is a system that doesn’t die. People still love the console all these years later and not in a niche kind of way. With so many games creating so many memories, and with so many games spawning so many franchises, it has to be considered the best of the best. This book is a great testament to that and the perfect companion for any NES adventure.

Somewhere beyond the fifth dimension and usually in a pillow fort, Rob McCallum spends his time building elaborate story-driven worlds, playing with action figures, and air drumming to some favorite tunes. The Emmy-nominated and award-winning filmmaker has been featured on NBC, CBS, CBC Radio•One, WIRE, and Destructoid for his work that centers on fandom, pop culture, and everything in between. He’s conjured over $350K via crowdfunding, sold films to Netflix and broadcasters around the world, and frequently contributes to books and podcasts. He’s obsessed with all things Jim Henson, has a deep love of Masters of the Universe, and one day hopes to visit Duckburg.