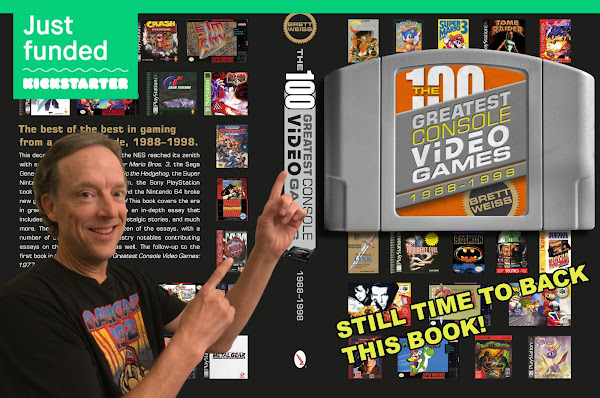 Wow, funded in just three days! Thanks to everyone who helped make this project a resounding success! Since I’m so jazzed about this, I decided to post my preface to the book where everyone can enjoy it. Even though the book has reached its goal, the campaign has a long way to go. You can back the book by clicking HERE.

When I’m a guest author (and now YouTuber) at various video game conventions around the country, including such shows as Classic Game Fest in Austin and the Portland Retro Gaming Expo, the question I get more than any other is, “What is your favorite game of all time?” The answer is always Mr. Do!, Universal’s 1982 arcade game ported brilliantly to the ColecoVision and Super Nintendo (my preferred home versions). If you haven’t played this classic maze title, you definitely should check it out.

The next most frequently asked question I get from fans is if I’m going to write a sequel to The 100 Greatest Console Video Games: 1977-1987, my first book from Schiffer, published in 2014. That book, which was inspired by the 2009 edition of Bill Warren’s titanic tome Keep Watching the Skies! American Science Fiction Movies of the Fifties (McFarland), has helped me connect with fans like nothing else I’ve ever written. To this day, I get a steady diet of feedback from readers on what for me was a pure labor of love. Many people tell me it’s their favorite book of mine and one of their favorite video game books all of time.

I’m truly humbled and flattered by all the attention the book has gotten, and I had a blast researching for and writing it. In fact, it’s the most fun I’ve ever had writing a book, thanks in part to the fact that all the games in it are, by definition, great. And I LOVE that era of gaming.

When 2020 hit, and the lockdowns began due to the Covid-19 pandemic, I decided to finally do what I’ve been wanting to for quite some time: heed the fans’ wishes and start writing The 100 Greatest Console Video Games Vol. 2: 1988-1998, which picks up where the original volume left off and covers another super important decade of gaming. Thanks to advances in technology and game development during the era, most of the games featured in this book are longer, more complex, and more story-driven than those in the first volume, which in some ways made it more interesting and more challenging to write. But the key qualification for each game remained the same: it must still be fun to play today, not just historically important (although that certainly plays a role).

During the timeframe this book covers, the Nintendo Entertainment System reached its zenith with such awesome games as Castlevania III: Dracula's Curse, my personal favorite in the series, Contra, the hardcore platform shooter that popularized the Konami Code, and Super Mario Bros. 3, which many players and pros cite as the greatest video game of all time. Do you have fond memories of playing Tecmo Bowl with friends and family members? You will of course find that game—one of the most beloved sports titles for any console—in these pages.

In 1989, Sega released the fantastic Genesis console, which would introduce the world to such concepts as “blast processing” (a marketing term created by Sega), “Sega does what Nintendon’t,” and a certain furry, attitudinal blue hedgehog that quickly became the company mascot. The Genesis originally came packaged with Altered Beast, which didn’t make the cut here, but the “Genny” is well-represented in this book by such titles as: Gaiares, an amazing hardcore “shmup” with an odd name; Gunstar Heroes, a dazzling platform shooter that will make Contra fans stand up and take notice; Mega Bomberman, my personal favorite in that killer multi-player series; NBA Jam, which is entertainment personified; and of course Sonic the Hedgehog (which replaced Altered Beast as the pack-in with the console), one of the most iconic video games of all time. The Genesis add-ons even get some love in these pages, with entries for such stellar titles as Earthworm Jim: Special Edition for the Sega CD and Virtua Racing Deluxe for the Sega 32X.

Nintendo released their follow-up to the NES in 1991 with the Super Nintendo, which regularly shows up at or near the top of greatest video game console of all time lists. It is indeed amazing, featuring such legendary titles as Contra III: The Alien Wars, The Legend of Zelda: A Link to the Past, and Super Castlevania IV, each of which carried forward a series featured on the NES and amped it up considerably in terms of graphics, sounds, size, sizzle, and overall awesomeness. The console also boasted awesome RPGs (such as Chrono Trigger), groundbreaking titles (such as Super Mario Kart), and games that breathed new life into tired genres (such as Donkey Kong Country).

If you aren’t super well-versed on the Neo Geo, Phillips CD-i, Panasonic 3DO, Sega Saturn, Atari Jaguar, or TurboGrafx-16, no worries—this book features the best-of-the-best for each of these relatively obscure consoles. If you’ve never played Metal Slug, Devil’s Crush, Tempest 2000, Panzer Dragoon Saga, or Wing Commander III: Heart of the Tiger, I pretty much guarantee you will want to after reading the chapters on these great, often underappreciated gems. If you’re a hardcore gamer, you know what I’m talking about.

And, then, of course, there’s the original Sony PlayStation and the Nintendo 64, consoles that gave us games that countless people of all ages still talk about, collect, and play on a frequent basis today. (You could say that about the NES, Genesis, and SNES as well, but I digress…)

The PS1, as it’s commonly known, was released in Japan in 1994 and hit the rest of the world in 1995. It brought mature, 3D gaming into the mainstream, changing the industry forever with such sophisticated titles as: Gran Turismo, a shockingly realistic racer; Castlevania: Symphony of the Night, a masterpiece co-architect of the “Metroidvania” subgenre; Metal Gear Solid, a stealth game with movie-quality production values; and Crash Bandicoot, which showed that the PlayStation could provide simple, charming, mascot-driven family entertainment as well.

Thanks to its air of elegance and refinement, the PlayStation was seen as less of a toy than most previous consoles and was viewed as more of an accepted entertainment device along the lines of a stereo or a VCR. For many gamers, it was their first CD player as it was compatible with that then-burgeoning music format. I was extremely impressed with the PlayStation, but as an old-school gamer it was the Namco Museum collections that truly sold me on the console and made me plunk down my heard-earned cash. For the first time, I could play pitch-perfect emulated versions (as opposed to close approximations) of classic arcade games at home. (I quickly grew to love many of the system’s more advanced/complex offerings as well.)

The Nintendo 64, released in 1996, has been criticized for sticking with the cartridge format, but it has some of the best, most fondly remembered first-party titles of any console. Like Super Mario Bros. for the NES, Super Mario 64 redefined and expanded the platformer genre, this time in glorious 3D. Despite showing its age, Goldeneye 007 is a fondly remembered multi-player game that introduced the concept of the first-person shooter to many gamers who were too young to remember DOOM and Wolfenstein 3D. And games like Banjo-Kazooie, Mario Kart 64, and Diddy Kong Racing were just plain fun.

As I mentioned earlier, I had a lot of fun writing this book. I had a blast editing it as well. In fact, editing was a HUGE part of the process because, unlike the first 100 Greatest book, a number of other scribes pitched in on the project and wrote their own essays about important games they love. These creators include: Greg Sewart, former editor for Electronic Gaming Monthly; Shane Stein, Executive Producer of Adventures in Game Chasing; Brian Lesyk, host of the Pass The Controller podcast; Kale Menges, a game artist and developer; and Matt Miller, a high score champion. I included these and other talented folks so you guys and gals would get opinions and nostalgic recollections from a variety of perspectives and not just my own. Plus, I needed writers to do chapters on games that I knew belonged in the book but that I’m not super passionate about, such as Final Fantasy III, Metal Gear Solid, and SimCity. (Spectacular games, of course, but I prefer more action-oriented titles.) The contributing writers did a fantastic job, and I truly believe you’ll enjoy reading their essays as much as I did. This book was truly a collaborative effort!

So, how did I come up with the list of 100 games? Good question. As with the first book, whether or not I thought the game holds up in terms of sheer entertainment was the primary determining factor. Graphics, sounds, historical significance, and other factors played a role as well, but enjoyment level and timelessness were more important. I did the research, replaying and brushing up on countless games, created the list, and ran it by my contributing writers and my Patrons for their feedback. They offered suggestions, some of which I took. The list is largely the same one I originally drafted, but I did change out a few titles. For example, Brian Lesyk suggested I replace The Legendary Axe II with The Legendary Axe. Both are great, but he was more passionate about the original than he was the sequel, and he felt it was a superior game. Since he was doing the essay, I complied.

So, what about games released from 1988-1998 (U.S. release dates) that are clearly top-notch but that aren’t featured in the book? Sonic the Hedgehog 2 was edged out by Sonic the Hedgehog. Both are amazing and still super fun, but the latter is more historically important (see, historical importance does count for something). Same with including Donkey Kong Country over Donkey Kong Country 2: Diddy's Kong Quest. I didn’t want to feature too many examples of games from the same series for the same console, but then, you might ask, why did both Resident Evil and Resident Evil 2 for the PS1 make the cut? And what about the inclusion of Streets of Rage 2—where’s the original game? Good questions that we can discuss if I ever see you at a gaming convention. Or, you could reach out to me on social media—I’m pretty easy to find. I’d love to hear your opinion on which games I should have included but didn’t and which ones that shouldn’t grace these pages but do. In other words, tell me where I went wrong!

Now, I’d better wrap up this lengthy rant so you can get to reading about what you came for—the games!

P.S. If you enjoy my work, please check out more content at www.brettweisswords.com. There you can find articles and reviews, as well as links to my books, Patreon page, social media, and YouTube channel. Enjoy!