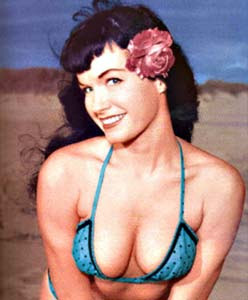 First Forry, then Bev, now Bettie. Hopefully, my next post won't be about the death of a cultural icon.

This obituary is reprinted from an L.A. newspaper:

Bettie Page, the brunet pinup queen with a shoulder-length pageboy hairdo and kitschy bangs whose saucy photos helped usher in the sexual revolution of the 1960s, has died. She was 85.

Page, whose later life was marked by depression, violent mood swings and several years in a state mental institution, died Thursday night at Kindred Hospital in Los Angeles, where she had been on life support since suffering a heart attack Dec. 2, according to her agent, Mark Roesler.

A cult figure, Page was most famous for the estimated 20,000 4-by-5-inch black-and-white glossy photographs taken by amateur shutterbugs from 1949 to 1957. The photos showed her in high heels and bikinis or negligees, bondage apparel -- or nothing at all.

Then there are the idealized portraits of her naughty personas -- Nurse Bettie, Jungle Bettie, Voodoo Bettie, Banned in Boston Bettie, Maid Bettie, Crackers in Bed Bettie -- memorialized by such artists as Olivia de Berardinis.


"I'll always paint Bettie Page," De Berardinis said Thursday night . "But truth be told, it took me years to understand what I was looking at in the old photographs of her. Now I get it. There was a passion play unfolding in her mind. What some see as a bad-girl image was in fact a certain sensual freedom and play-acting - it was part of the fun of being a woman."

"The origins of what captures the imagination and creates a particular celebrity are sometimes difficult to define," Playboy magazine founder Hugh Hefner said Thursday night. "Bettie Page was one of Playboy magazine's early Playmates, and she became an iconic figure, influencing notions of beauty and fashion. Then she disappeared. . . . Many years later, Bettie resurfaced and we became friends. Her passing is very sad."

In an interview 2 1/2 years ago, Hefner described Page's appeal as "a combination of wholesome innocence and fetish-oriented poses that is at once retro and very modern."

According to her agents at CMG Worldwide, Page's official website, www.BettiePage.com, has received about 600 million hits over the last five years.

"Bettie Page captured the imagination of a generation of men and women with her free spirit and unabashed sensuality," said Roesler, chairman of the Indianapolis-based CMG Worldwide, who was at Page's side when she died. "She was a dear friend and a special client and one of the most beautiful and influential women of the 20th century."

A religious woman in her later life, Page was mystified by her influence on modern popular culture. "I have no idea why I'm the only model who has had so much fame so long after quitting work," she said in an interview with The Times in 2006.

She had one request for that interview: that her face not be photographed.

Bettie Mae Page was born April 22, 1923, in Nashville. She was the oldest girl among Roy and Edna Page's six children. Her father, an auto mechanic, "molested all three of his daughters," Page said in the interview.

Her parents divorced in 1933, but life didn't get any easier for Bettie.

"All I ever wanted was a mother who paid attention to me," Page recalled. "She didn't want girls. She thought we were trouble. When I started menstruating at 13, I thought I was dying because she never taught me anything about that."

After high school, Page earned a teaching credential. But her career in the classroom was short-lived. "I couldn't control my students, especially the boys," she said.

She tried secretarial work and marriage. But by 1948 she had divorced a violent husband and fled to New York City, where she enrolled in acting classes. She was noticed on the beach at Coney Island by New York police officer and amateur photographer Jerry Tibbs, who introduced her to camera clubs.

Page quickly became a sought-after model, attracting the attention of Irving Klaw and his sister, Paula, who operated a mail-order business specializing in cheesecake and bondage poses.

Under contract with the Klaws, Page was photographed prancing around with a whip, spanking other women, even being hog-tied. She also appeared in 8-millimeter "loops" and feature-length peekaboo films with titles like "Betty Page in High Heels."

"I had lost my ambition and desire to succeed and better myself; I was adrift," Page recalled. "But I could make more money in a few hours modeling than I could earn in a week as a secretary."

Her most professional photographs were taken in 1955 by fashion photographer Bunny Yeager. They included shots of Page nude and frolicking in waves and deep-sea fishing, and a January 1955 Playboy centerfold of her winking under a Santa Claus cap.

At 35, Page walked away from it all. She quit modeling and moved to Florida, where she married a much younger man whose passions, she later learned, were watching television and eating hamburgers.

Page fled from her home in tears after a dispute on New Year's Eve in 1959. Down the street, she noticed a white neon sign over a little white church with its door open.

After quietly taking a seat in the back, she had a born-again experience. Page immersed herself in Bible studies and served as a counselor for the Billy Graham Crusade.


In 1967, she married for a third time. After that marriage ended in divorce 11 years later, Page plunged into a depression marked by violent mood swings. She argued with her landlady and attacked her with a knife. A judge found her innocent by reason of insanity but sentenced her to 10 years in a California mental institution.

She was released in 1992 from Patton State Hospital in San Bernardino County to find that she had unwittingly become a pop-culture icon. A movie titled "The Rocketeer" and the comic book that inspired it contained a Bettie-esque character, triggering a revival, among women as well as men, that continues unabated.

With the help of admirers including Hefner, Page finally began receiving a respectable income for her work.

In an interview published in Playboy magazine in 2007, Page expressed mixed feelings about her achievements. "When I turned my life over to the lord Jesus I was ashamed of having posed in the nude," she said. "But now, most of the money I've got is because I posed in the nude. So I'm not ashamed of it now. But I still don't understand it."

She spent most of her final years in a one-bedroom apartment, reading the Bible, listening to Christian and country tunes, watching westerns on television, catching up on diet and exercise regimens or sometimes perusing secondhand clothing stores.

Occasionally, however, Page was persuaded to visit the Sunset Boulevard penthouse offices of her agents at CMG Worldwide to autograph pinups of herself in the post-World War II years of her prime. The agency controls her image and those of Marilyn Monroe and Princess Diana, among others.

During one such event in early 2006, Page needed about 10 minutes to get through the 10 letters of her name. As she pushed her pen over a portrait of her in a negligee with an ecstatic smile, she laughed and said, "My land! Is that supposed to be me? I was never that pretty."

She is survived by her brother Jack Page of Nashville and sister Joyce Wallace of Blairsville, Ga. 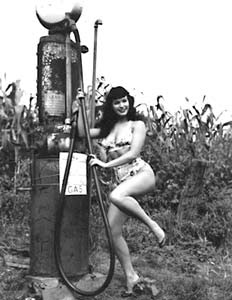 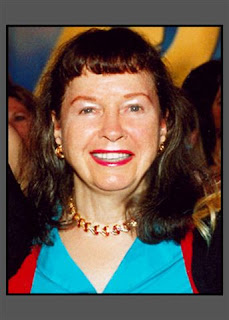 Bettie didn't like to be photographed after she had gotten older (she wanted people to remember her the way she looked during the peak of her modeling career), so I was interested to see this photo of her when she was 80 (and still looking lovely), sent to me by a friend.
Posted by Brett at 2:05 PM