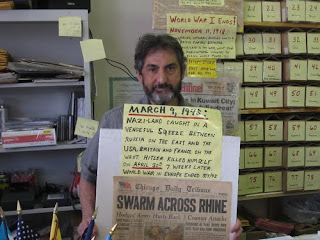 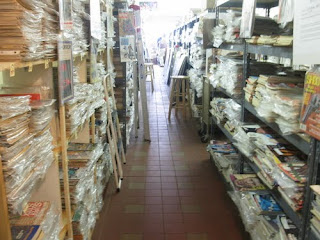 Skokie, IL—Walk into most any used bookshop, and you’re likely to find a small selection of back issue magazines—maybe some recent copies of Time, Entertainment Weekly, Game Informer, and People. But that’s usually about it. These types of stores simply lack the space and/or desire to carry out-of-date magazines. A decent selection of old newspapers is even harder to find on a retail level.

Luckily, there’s a store—actually, a “museum where you can buy the exhibits,” boasts owner Bob Katzman—that caters specifically to folks looking for vintage periodicals. A few of the older, rarer items, such as a newspaper from 1681, are for display purposes only, but most of the store’s inventory is for sale.

From important historical newspapers, such as those published when John Dillinger broke out of jail or when John Wayne died, to long runs of Playboy, Mad, Life, and Ebony (black history is important to Katzman), the store stocks more than 100,000 items, the bulk of which are from 1940s through the 1970s.

Katzman caters to a wide variety of customers, including collectors, curiosity seekers, nostalgia buffs, history teachers, researchers, and, perhaps most prominently, gift-givers looking to purchase a magazine or newspaper that corresponds with a friend or family member’s birth date, anniversary, or other important occasion.

An entrepreneur from an early age, Katzman began collecting periodicals on November 22, 1963, the day Kennedy was shot. Katzman was only 13 years old. He left home at 14 and opened his newsstand at 15 in order to support himself. From those humble beginnings sprung Bob Katzman’s Magazine Museum, one of the only stores of its type in the country.

Brett,I was unaware this review by you existed. Thanks for the kind words. Wish more people realized what I do still exists. Just 4 of us left in the USA.
I am a writer with 5 non-fiction Chicago-related books in print. If curious:w ww.DifferentSlants.com
Whatever you read there, actually happened. Its free, too, and as yet, unreviewed.
Thanks again, Brett.
Bob Katzman