My new book ebook of short stories contains nine tantalizing tales, including "The Land of Oz," which is set in the classic arcade of the same name. You can read an excerpt below and order the book HERE. 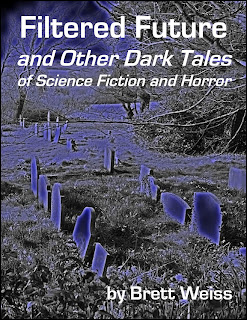 The Land of Oz


The familiar sounds of electronic fighting, pseudo gunfire, virtual racecars and hollow explosions punctured Jeff’s ears as he stood in the doorway looking out the entrance to The Land of Oz and into the mall corridor. An occasional “cool, dude” and “awesome, man” rose above the canned noise.

Jeff strummed his pudgy fingers over the money changer strapped to his belt as he watched young couples walk past hand in hand, smiling, talking, laughing, enjoying the freedom of youth.

Jeff looked at his watch, stifled a yawn and turned to go back inside. He froze in mid-turn, his chin falling to his tree trunk neck.

Three girls walked his way, each of them within kissing distance of the other: a blonde, a brunette, and a redhead—vanilla, chocolate and strawberry. Like a banana split without the nuts.

Jeff had long ago quit pretending not to look. These days he openly stared. What the hell. Sometimes he got dirty looks, and, on rare occasions, a smile. But usually girls couldn’t be bothered to spare a glance toward him or the arcade. And they almost never came in. Unless, of course, they were with a dude.

Jeff stood tall, his eyes painting the girls with even strokes. Each girl was just over five feet tall, he guessed. Their pert little breasts stood unmoving behind tight sweaters. The blonde girl’s sweater rode up just enough to expose her belly button, which sported a small metal hoop.

Jeff clinched his hands into painful fists, his body slowly rotating as he watched the girls pass. He chose the blonde. “Summer,” he decided. She looks like a Summer.

Jeff watched “Summer” walking away, the other flavors forgotten. He looked her up and down, from her silky curls to her narrow back and waist to her apple-round ass.

“Damn,” he uttered under his breath. “Son of a bitch.”

The girls never even looked in Jeff’s direction. He figured they were most likely headed for Hot Topic or the food court or one of the upscale clothing stores. Or maybe to the bookstore to look at fashion magazines. They were probably too young, anyway. Who could tell these days?

Jeff woke from his irreverent revelry. He shifted the toothpick that he had forgotten he had in his mouth and turned around, only to see a sickly looking, pale wisp of a boy trembling before him.

Jeff hated his job at the arcade. He was sick of the claustrophobic atmosphere and the strobe lights and the noise and the dry-aluminum smell of recycled mall air. He especially hated the modern videogames with their emphasis of style over substance and violence over originality: secret codes and special moves taking the place of raw skill and eye-hand coordination; flashy, obtrusive graphics and gimmickry substituting for finely tuned gameplay and beautiful, stark simplicity.

The goddamned ticket redemption games were even worse.

Jeff had started in the business more than a decade ago, when pinball, Pac-Man and pool were king. When arcades were dimly lit places where you could shoot for high scores, smoke cigarettes, flirt with hot girls and listen to rock music. He loved Aerosmith, Judas Priest and The Stones, but his favorite band of all time was KISS: their melodic hard rock music laced with the trappings of comic books, horror movies and sex.

The wisp stood there patiently, waiting for a reply, his eyes pleading silently for a response.

“I haven’t seen you in here lately,” Jeff said. “You been grounded?”

The boy shoved his hands in his pockets and looked at the ground. “Aladdin’s Castle has a sale going. Five tokens for a dollar.”

Jeff scowled like a frumpy schoolmarm. “Don’t you ever play outside? Ride your bike? Shoot some hoops or throw the football?”

The boy shifted his feet nervously, adjusted his glasses, ran the back of his hand across his nose and slowly turned to walk away.

Jeff pinched the back of the boy’s shirt and gently pulled him back. “Hold on,” he said. “What’s wrong with the game?”

As they approached Immoral Killings, the boy glanced back to make sure Jeff was following. The boy had a gleam in his eye, like this was his proudest moment—his chance to prove his value to mankind.

“See, it’s messed up,” he said. “Just a bunch of dumb words on the screen. Where’s Chung Pow and Willy Lee and Kodan Mock? Where’s Jon Kwan Do?”

Jeff frowned as he read the first couple of lines on the screen. “Son, have you read any of this?”

“Not really,” the boy said, holding out his hand. “Can I have a free token?”

Jeff stuffed his right hand into his pants pocket and pulled out a fistful of tokens. He shoved them in the kid’s direction, spilling a few in his eager palm and the rest on the floor. Feeling as though he had won the lottery, the boy quickly dropped to the floor and scooped up the coins. He then made a beeline for Mortal Kombat II.

Jeff continued reading the message on the video screen.

Who is in charge?
Why do your people kill?
Who has the power?
Who do you cheat and steal?
Why do some of your people get fat while others starve?
Who is your leader?
Why do innocents die?
Who holds the key?
Why do you wage war against those like yourselves?
Who makes the law?
Why do you insult and strike one another?
Who is your king?
Why do you abuse your own bodies?
Who rules over you?

Jeff arched back and looked around to make sure no one was watching or needed any help. Satisfied he was alone with this…communication or whatever it was, he leaned in and continued reading.

Meet us on the roof of the tallest structure in your city.
We are there now. Tell no one of your contact with us. Be prepared to tell us everything we need to know.

Computer hackers, Jeff thought. Those bastards. Almost had me going. He shook his head and smiled as he pulled six tokens out of the front pocket of his red vest and dropped them, one by one, into the little slot on the front of the machine. He was curious what would happen next. Sure enough, as soon as the sixth token disappeared into the slot, the game went back to normal just like it said it would.

“Hey, dude, is there a pisser in this place?”

Jeff turned around to put a face with the rude voice. “My name’s not dude, and the restrooms are at the other end of the mall by the food court. Why don’t you just go home to use the can? The mall’s about to close.”

At 8:59, Jeff flipped the master switch in his office, shutting down all the arcade games in The Land of Oz. Ignoring the moans and groans of the few remaining customers, Jeff kicked them out and began his usual closing procedures: pull down and lock the two gates, empty the money changers, count the cash, fill out the bank deposit.

Bundling up against the winter weather, Jeff set the alarm and headed for the exit at the back of the office.

The night was dark, lonely and bitterly cold. Low temperatures kept home all but the restless young. The moon was hidden, but a few brave stars sprinkled light from the heavens, piercing the smog, their faint light absorbed into the snow-covered streets.

Jeff stepped outside, slamming the heavy, fireproof door behind him. He walked carefully onto the icy sidewalk, bracing himself for the hike to his apartment, which was seven blocks away.

Jeff squinted as strong, cold winds pelted his unprotected face, turning it bright red. The navel-pierced blonde from earlier in the evening was temporarily forgotten, stored in a file marked DANGER, JAILBAIT INSIDE: OPEN ONLY WHEN IN NEED OF MASTURBATORY FANTASY.

But he couldn’t forget those odd, strangely disconcerting messages on Immoral Killings: “Why do your people kill each other? Who is your king?"

What a load of crap, Jeff thought, trying to shrug off the unease he was starting to feel. He couldn’t believe he was nervous about a few lines of inane text on a damned arcade game. It was probably just some wiseass programmer who had planted the messages into the machine as an Easter egg. And the kid had just stumbled across it by hitting the right combination of buttons.

Regardless, Jeff was hungry and looking forward to getting home, even though the closest thing to company waiting for him there was a frozen pizza and a stale, half-empty, two-liter bottle of Pepsi.

Jeff was almost to his high-rise apartment building when he remembered that the videogame had actually threatened his life. The message had said to meet at the tallest structure in the city. That would be the McLuhan Media Communications Tower over on Fourth, just a couple of blocks over.

What the heck, Jeff thought, it’s not like I have a date tonight or anything. Maybe it’s some kind of computer-nerd game and they’ve left some clues or something. Maybe they’ll direct me to a website or another spot in the city. Might be kind of fun—a real-life text adventure. Or maybe they’ll be waiting for me when I get there so they can mug me and steal my wallet. Or kill me. Yeah, right.

Jeff stood before the front door of the McLuhan building, feeling more than a little foolish. The structure was pitch dark—closed for the night, locked up, shut down, see-you-tomorrow. He pushed on the opener bar and was only half-surprised that the door opened. He took a deep breath, and he could feel his heart beating beneath his sweater and oversized coat. He glanced around to see if anyone was looking. The streets were largely empty. He went inside, letting the door slowly shut behind him.

CONTINUED IN MY NEW EBOOK, FILTERED FUTURE AND OTHER DARK TALES OF SCIENCE FICTION AND HORROR, which is only $2.99 through Amazon.
Posted by Brett at 10:05 PM