D2K Arcade for the Intellivision - REVIEWED!

D2K Arcade for the Intellivision
Publisher: Elektronite
Grade: 5 out of 5 stars 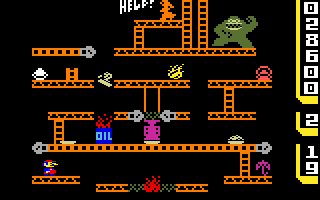 The follow-up to DK Arcade (also known as D1K Arcade), which was a stunningly complete rendition of Donkey Kong (1981), D2K Arcade is nothing less than the best home version of the coin-op classic every released for any system.

There are two game modes in this immensely satisfying, professionally produced cartridge (no recycled materials were used), the first of which (Game 1, natch) is an excellent rendition of Donkey Kong (the same as D1K Arcade), complete with intro, intermissions, and all four levels of play: Barrels (a.k.a. Girders), Pie Factory (a.k.a. Conveyor Belt), Elevators, and Rivets.

Yes, that’s right, ColecoVision and NES owners, your versions of the game—with their missing screen (Pie Factory) and lack of interstitial animations—now take a back seat this classy new cartridge (though, to be fair, the CV and NES versions have better graphics). And don’t get me started on the two-screen abomination that was Coleco’s Donkey Kong for the Intellivision, which galled gamers with its clumsy controls, ugly graphics, and tortured sound effects.

Speaking of audiovisuals, D2K Arcade looks and sounds better than it has any right to. From the “How high can you get?” text mantra to DK falling on his head (with eyes bulging) at the end of the Rivets screen, D2K Arcade captures virtually everything that made the original a great, fun, challenging, cartoon-like classic. (Nitpickers may point out that the blocky, mono-colored damsel in distress is only slightly more appealing in appearance than homely Mabel in the otherwise excellent Beauty and the Beast, but this is a small gripe).

In addition to the standard Donkey Kong port, D2K Arcade features an indispensable, incredibly cool Game 2 (the default mode, since it's the primary selling point of the cartridge), which consists of five new game boards (plus two standard Donkey Kong levels), each of which incorporates classic components (along with some new elements), but arranges them in decidedly different ways for new challenges and thrills. New screens include: Twisted Girders, The Mixer, The Refinery, Triple Elevators, and The Eliminator. 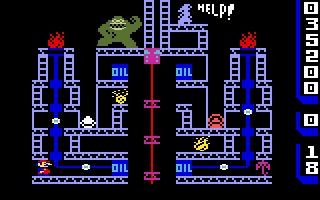 Another admirable, depth-infusing addition to D2K Arcade is the inclusion of three selectable characters. There’s Mario, of course, but gamers can now play as: Toni (Mario’s younger brother), who runs fast; and Bruno (Mario’s older brother), who’s a little slow, but can climb ladders while holding a hammer! For those of you wondering, Mario’s “real” fraternal twin brother, Luigi, does not appear. (In terms of visuals, Toni and Bruno are merely palette-swapped Marios).

I find it extremely rewarding to play new games for old systems, especially ones as high in quality as D2K Arcade, which has crisp controls (even with the sometimes-problematic Intellivision control disc), stunning graphics, faithfully recreated sound effects (plus some added surprises—the game talks WITHOUT AN INTELLIVOICE), and endless hours of entertaining and challenging gameplay. Excellent production values for the packaging (box, color manual, labeled cartridge, keypad overlay) add to the fun and collectability of this quality release

If you’re like me and still have an Intellivision, I can’t recommend D2K Arcade highly enough.

For more information, check out the following websites:

Games for Your Intellivision 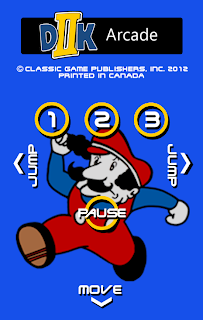