My article on the Oklahoma Video Game Exhibition appeared in the latest issue of AntiqueWeek. Here's that article reprinted: 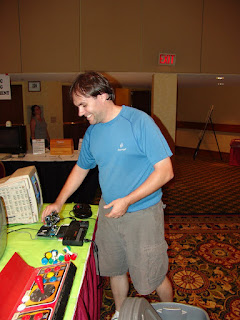 Founder and organizer Jesse Hardesty setting up a display at a previous Oklahoma Video Game Exhibition.

TULSA, OK—Do the words “Pac-Man,” “Space Invaders” and “Donkey Kong” immediately transport you back to a simpler time (the early 1980s), when playing video games was all about munching dots, shooting aliens, climbing ladders and jumping over obstacles? Do you miss the Golden Age of home consoles and coin-op classics, such as the Atari 2600 and Frogger?

If so, then you might consider attending the Oklahoma Video Game Exhibition, a daylong tribute to gaming’s glorious past. Held at the prestigious Spirit Bank Event Center, OVGE celebrates the history, hobby, collecting and entertainment aspects of the industry, giving nostalgia buffs, casual gamers and hardcore fans alike a gathering place to buy, sell, trade, talk about and otherwise obsess over video games.

In addition to vendors selling classic video games and related merchandise (T-shirts, books, keychains, action figures, and the like) , OVGE will have numerous video game systems, arcade games and vintage computers set up on free-play. Tournaments, door prizes, book signings and a trivia contest (hosted by nintendo-okie.com) add to the fun.

Most retro video game get-togethers, such as the Classic Gaming Expo (Las Vegas, NE) and the Midwest Gaming Classic (Brookfield, WI), are held out west or up north, but OVGE gives gamers living in such states as Oklahoma, Arkansas, Kansas, Missouri, and Texas a chance to congregate and compete without racking up too much mileage on the family truckster.

“Before OVGE, people from the surrounding states had to travel across the country for a classic video game convention,” said Jesse Hardesty, founder and organizer of the event.

One question remains: Why would anyone want to play old, outdated, technologically inferior video games when there are so many new ones available for such powerful consoles as the Nintendo Wii, PlayStation 3, and Xbox 360?

Albert Yarusso, co-founder of AtariAge.com, thinks he has the answer: “Even though modern game systems have amazing graphics and sounds, the most important aspect of any video game is that it actually be fun to play,” he said. “Because classic game systems, like the Atari 2600, had very simple graphics, game designers had to focus on the gameplay. Those same games that were fun in the late 1970s and early ’80s are still just as much fun today.”

Hardesty chipped in his two-cents as well, citing the appeal of classic games’ “pick-up-and-play philosophy that makes for quick gaming without the need to invest in the large amounts of time that many of today's games require.”

A family-friendly affair, the Oklahoma Video Game Exhibition encourages gamers of all ages to take a fun trip down memory lane. “With video gaming being today’s main form of home entertainment, the history behind it should not be forgotten,” Hardesty said. “The Oklahoma Video Game Exhibition is providing the youth of today and their parents a chance to visit and interact with that past.” 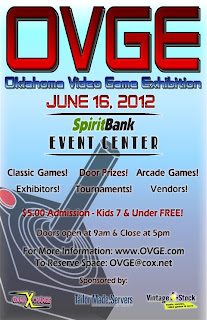 I enjoy coming to this event every year. I believe I have attended the past three events and since I live in Oklahoma it makes it easy.

Always had a blast walking through the conference hall and seeing all the video game greatness lined up table after table.