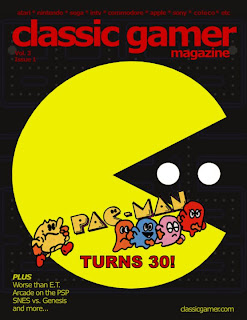 In Classic Gamer Magazine  Vol. 3 #1, I was interviewed by Chris "Cav" Cavanaugh, my friend and former editor at the All Game Guide. Here is that that interview (conducted in 2010), reprinted for your perusal:

Pop culture expert Brett Weiss has written numerous articles that have appeared in the Comics Buyer’s Guide, Fangoria, Allgame.com, and past issues of Classic Gamer Magazine. Brett recently authored two books: Classic Home Video Games: 1972-1984 and Classic Home Video Games: 1985-1988 and agreed to talk to us about the challenges of writing, getting published, and how mowing lawns is good for the game collector’s soul.

CGM: Convincing a major book publisher to publish a book isn’t easy. Can you tell us how the initial deal happened? Did you approach them or was it the other way around?

WEISS: McFarland Publishers, which publishes a variety of scholarly entertainment books, had a booth at Comic-Con International in San Diego in 2006, and I introduced myself to one of their editors. I gave her a business card and told her to contact me if I could contribute to any of their books. Three days after I returned home, I received an email from that editor, asking me if I had any interesting book ideas. I quickly pounded out a proposal and some sample entries, emphasizing that a book like mine had never been done before: descriptions/reviews/data for every single game for every U.S.-released classic programmable system. They approved the idea pretty quickly.

During the early-to mid-1990s, I worked up a proposal for a similar book, but I couldn’t find a publisher.

CGM: How much influence does the publisher have on content? Did you have to make
sacrifices?
WEISS: The publisher was very receptive to my original proposal, and both books are pretty much exactly like I conceived and wrote them. During the editors’ meeting, my proposal was approved unanimously. They loved the nostalgic content, the quality of the writing, and the comprehensive nature of the books. The only sticking point was their insistence on spelling the word “videogame” as two words.

CGM: What are the challenges associated with writing these books?

WEISS: Condensing a long RPG or point-and-click adventure down to a clear and concise, yet detailed overview. Trudging through horrible games. Getting far enough into really hard games to describe and review them accurately and fairly. The sheer exhaustion of having to write about the games in addition to playing them. Not having enough time to play new games because I’m so busy with the old systems.

Luckily, I largely prefer older games, but I’d love to have enough time and energy to pick up a PS3 and play through God of War III and Batman: Arkham Asylum. On the other hand, I love discovering obscure gems that I had never played before, such as the wildly inventive and hugely entertaining Killer Bees! for the Odyssey2. That was the last game I wrote about for my first book—I had to buy the game on eBay.

CGM: What was their reasoning for wanting to release the books in hardcover? Did you try to convince them otherwise? Do you think the decision has helped or hurt sales?

WEISS: I had absolutely no say in the matter. I was flattered that the books were published in hardcover, but I have met resistance by some potential buyers because of the hardcover pricing. On the other hand, everyone I’ve talked to who has bought either book is very happy with their purchase(s). People tell me they refer to my books again and again, and that’s the best compliment I could ever get. I’m also frequently told that the books are well written, which is always good to hear.

CGM: Is there talk about making these books available in paperback?

CGM: What percentage of research goes into your books vs. how much you just know off the top of your head?

WEISS: I wouldn’t quite say that the books wrote themselves, but I have been playing these games nonstop since they came out. The first system I actually owned was a ColecoVision when I was 15, but prior to the release of the ColecoVision, I was constantly going over to friends’ and relatives’ houses to play their systems. In fact, my two best friends each had a Fairchild Channel F of all things.

After I got my ColecoVision for Christmas of 1982 (I actually had to kick in $100 of my lawn mowing money to make it happen), I began collecting games like crazy (my second system was an Atari 2600 with 10 games that I bought off a classmate
for the incredibly low price of $10).

I would get new systems as they would come out, but I never got rid of my older systems. I simply kept adding to them as I would find older games on clearance and at garage sales, flea markets, and thrift stores. Despite my familiarity with old games, I still do tons of research to make sure I get everything as accurate as possible, and to refresh my memory for games I haven’t played in a long time.

CGM: Do you use any magazines or websites for research? Which ones?

WEISS:  Thanks to their instruction manual scans, AtariAge and Nintendo Age were absolutely invaluable when I was writing my first two books. As everyone knows, it’s much tougher to find manuals than game cartridges. I also used gamefaqs walkthroughs a few times when I had trouble getting past a certain area or level in a particularly hard or confusing game.

Digital Press has been helpful as well. When a game’s manual or title screen doesn’t mention who the developer is, and when various websites have conflicting information, I sometimes ask on the Digital Press message boards, and I usually get a response. Of course, I will then do more research to determine if the information they gave me is accurate.

CBG: Just to get inside your head a little bit, can you tell us about what goes into your writing process?

WEISS:  I play the games in the evening and wake up early the next morning--oftentimes as early as 3 or 4 a.m.—to write about them. Prior to sitting down to my desk, I’ll fire up a steaming hot cup of Earl Grey tea. I tried Earl Grey back when Captain Picard would order it from the food replicator on Star Trek: The Next Generation (yes, I’m a geek), and quickly became addicted to it.

I’ve been a freelance writer for almost 20 years, so I’ve got a pretty good routine in place. Comfortable pants/shorts and a good, sturdy chair that supports the back are absolutely essential. I write most every morning (and most afternoons), but I sometimes take Saturday morning off if my kids get up when I do.

CGM: How long did it take to write each of the books?

WEISS: The first book took about a year. Classic Home Video Games, 1985-1988 took over two years, partly because most of the games from that era are longer and more complex.

CGM: How has the feedback been from those who've purchased the books? Have there been any interesting suggestions?

WEISS: The feedback has largely been terrific. Both books have reviewed extremely well. The most frequent comment I get is that people use the books when they are looking to purchase some older games they may enjoy. This is followed closely by people using the books because they can’t remember a specific fact about a particular game, or just because they’re fun to flip through. Some readers comment that they wish the photos were in color, but that is entirely up to the publisher.

CGM: Approximately how many copies have the books sold?

WEISS: I would tell you, but then I’d have to kill you. I can tell you that the first book has almost sold through its first printing, which is nice. With the new book, it’s too early to tell.

CGM: What era of gaming do you enjoy most and why?

WEISS: While I’ve had a truly great time with such titles as Halo, God of War, Wii Sports, and Burnout, my favorite games are from the late ’70s and early ’80s. Games like Dig Dug, Galaga, Super Pac-Man, Zoo Keeper and Phoenix are simple, but challenging, intense, strategic, and endlessly replayable. Mr. Do! is my all-time favorite game. I still keep records of my highest scores on many of my favorite old games (again, the geek factor rears its ugly head).

WEISS: I love how Coleco took such second (and third) tier arcade games as Frenzy, Carnival, Lady Bug, Pepper II, Space Panic, Slither, and Mouse Trap, emulated them beautifully, and made them available for home play. These were great games that were unfairly overlooked until they made it into gamers’ living rooms. Since you could play the games again and again without having to put in a quarter every time, you could take the time to truly discover how great these games were. Plus, there are great third-party titles like Jumpman Junior and Miner 2049’er. Some complain about the controllers, but I like them.

My favorite modern system is the PS2, partly because of its many arcade classics collections, but also because of some great modern games like Lumines, REZ, and Maximo: Ghosts to Glory.

CGM: Can you tell us anything about the third book you are currently writing?

You can down the entire issue for free HERE.
Posted by Brett at 2:12 PM