Reprinted from AntiqueWeek, here's my article on He-Man's 30th anniversary:

Filmation’s animated sword-and-sorcery series, He-Man and the Masters of the Universe, debuted on television in the fall of 1983, begging the question: Why is 2012 considered to be the 30th anniversary of the popular franchise? As He-Man fans well know, it’s because the Mattel action figure line hit store shelves in 1982.

One can argue the artistic merits of basing a cartoon on a toy, but one thing is indisputable: He-Man and the Masters of the Universe was a massive commercial success, especially with young males.

According to an article published in the Jan. 7, 1985 issue of Time magazine, He-Man had “proved puissant enough to capture the attention of more little boys than any other television show in America,” helping move more than $500 million of Masters of the Universe action figures and $500 million more in miscellaneous merchandise. The latter included such items as pins, buttons, glassware, clothing, video games, TV trays, flashlights, coin banks, and school supplies. 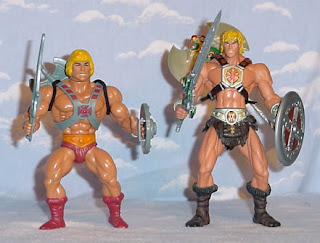 Most consumers who bought He-Man figures during the TV show’s heyday opened the toys, threw away the packaging, and waged numerous wars between good and evil. As in the cartoon, the blonde, buff, Power Sword-wielding He-Man and his pals would inevitably battle the evil Skeletor and his minions, who wanted nothing less than to conquer Castle Grayskull and learn of its ancient and powerful secrets.

Many of those kids who played with He-Man and company are feeling especially nostalgic these days, driving the prices skyward on original Masters of the Universe toys. Packaged figures, such as Battle Armor He-Man, Beast Man, and Fisto, and accessories, such as the Castle of Eternia play set and the Bashasaurus vehicle, routinely sell for hundreds and in some cases more than a thousand dollars each. 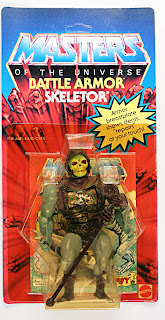 To help celebrate He-Man’s 30th anniversary, DC Comics is producing an all-new He-Man and the Masters of the Universe comic book, which is scheduled for release in July. Written by James Robinson (Justice League of America), with pencils by Phillip Tan and inks by Ruy Jose, the six-issue series finds Skeletor ruling (and rewriting the history of) Eternia from his lair in Castle Grayskull.

In an interview with MTV Geek (www.mtv.com/geek/), Robinson said, “I agree to some people Masters of the Universe is considered a cheesy cartoon. However, I know for a fact that a certain generation of people, who grew up at the right time, hold genuine affection for Masters of the Universe. The challenge is to write something that raises the standard for the series, with a cool, modern story that nevertheless honors the fans of the animated series and toy line.”

Said fans of the animated series will get a treat this fall in the form of a 30th anniversary edition DVD boxed set, which will include special bonus features as well as content aimed at collectors.
Posted by Brett at 12:49 PM