My article on the late, great Ray Bradbury was in a recent issue of AntiqueWeek. Here's that article reprinted: 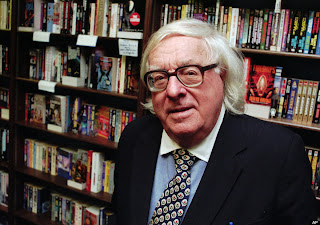 Ray Bradbury died June 5 at the age of 91, leaving behind a body of work that is unparalleled in the fields of dark fantasy and science fiction. His dystopian SF novel, Fahrenheit 451 (adapted for film in 1966), is still widely read and studied in schools across the country while his famously themed short story collections, published as The Martian Chronicles (adapted for television in 1979) and The Illustrated Man (adapted for film in 1969), continue to fascinate readers with a taste for the strange, the unusual, and, most all, the imaginative. 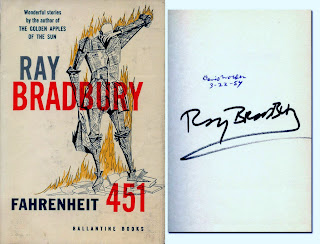 Writing in a lyrical, beautifully evocative style, in which the reader can almost see and hear the things being described (autumn leaves blowing in the cool wind, exotic Martian landscapes, grimacing pumpkins on The Halloween Tree), Bradbury is also known for the novel Something Wicked this Way Comes (adapted for film in 1983), as well as such celebrated short stories as “The Small Assassin,” “The Fog Horn” (adapted for film as The Beast from 20,000 Fathoms in 1953), and "I Sing the Body Electric!" (adapted for the 100th episode of The Twilight Zone). 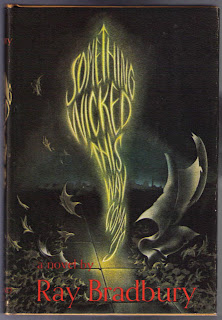 A master of the make believe, Bradbury wrote all 65 episodes of The Ray Bradbury Theater, which ran on HBO from 1985 to 1986 and USA Network from 1988 to 1992. Similar to Alfred Hitchcock (Alfred Hitchcock Presents), Rod Serling (Twilight Zone), and Boris Karloff (Thriller), Bradbury appeared in the intro sequence for the episodes, looking both avuncular and eccentric (in the non-pejorative sense of the word).

Bradbury wrote the screenplays for John Huston’s Moby Dick (1956) and Disney’s Something Wicked This Way Comes (1983), but his work was more often seen on television, including story adaptations for such programs as Tales of Tomorrow, Lights Out, and Alfred Hitchcock Presents. Bradbury’s stories were also adapted for comic books and even a computer game: 1995’s Ray Bradbury's The Martian Chronicles Adventure Game.

Bradbury was a huge influence on fantasists far and wide, and his death ignited a firestorm of remembrances and praise around the Internet. Here’s a short sampling:

*"Ray Bradbury wrote three great novels and three hundred great stories. One of the latter was called 'A Sound of Thunder.' The sound I hear today is the thunder of a giant's footsteps fading away. But the novels and stories remain, in all their resonance and strange beauty."—Stephen King

*”He was kind, and gentle, and always filled with enthusiasm, and the landscape of the world we live in would have been diminished if we had not had him in our world. I am so glad that I knew him.”—Neil Gaiman

*"He was my muse for the better part of my sci-fi career. He lives on through his legion of fans. In the world of science fiction and fantasy and imagination he is immortal."—Steven Spielberg

Even President Obama remarked on the passing of Bradbury, saying that his "gift for storytelling reshaped our culture and expanded our world." A spokesman for Bradbury’s publisher, Harper Collins, chimed in as well: “In a career spanning more than seventy years, Ray Bradbury has inspired generations of readers to dream, think, and create."

Bradbury was born in 1920 in Waukegan, Illinois. A voracious reader, he spent much of his childhood in the Carnegie library in Waukegan, spellbound by the works of such fantasists as H.G. Wells, Jules Verne, Edgar Allan Poe, L. Frank Baum, and, especially, Edgar Rice Burroughs (of Tarzan and John Carter, Warlord of Mars fame). He was also heavily influenced by films, including The Hunchback of Notre Dame (1923 Lon Chaney), which his mother took him to see when he was just three years old.

The primary factor in Bradbury’s career choice was a magician named Mr. Electrico. “He sat in his electric chair every night and was electrocuted in front of all the people, young and old,” Bradbury said on his website in 2001. “When the electricity surged through his body he raised a sword and knighted all the kids sitting in the front row below his platform. When he reached me, he pointed his sword at my head and touched my brow. The electricity rushed down the sword, inside my skull, made my hair stand up and sparks fly out of my ears. He then shouted at me, ‘Live forever!’”

Somehow, these and other words spoken by Mr. Electrico (including some nonsense about knowing Bradbury previously in the great war in France in 1918) convinced a 12-year-old Bradbury to sit down and write, which he ended up doing almost every day of his life. In total, Bradbury wrote more than 600 short stories, nearly a dozen novels, and numerous plays, poems, screenplays, teleplays, and children’s books. He’s written hundreds of essays as well, some of which were collected in Bradbury Speaks: Too Soon from the Cave, Too Far from the Stars (2005, William Morrow).

Bradbury began his professional career during the 1930s, writing stories for the pulps. As his legacy and body of work grew, and such works as The Martian Chronicles (1950) and Fahrenheit 451 (1953) gained critical acclaim around the world, he earned the reputation of a writer who brought a sense of class and literary accomplishment to the much-maligned (especially at the time) fields of science fiction and fantasy.

During his long, productive life, Bradbury was given numerous awards and commendations, including a star on the Hollywood Walk of Fame, an Emmy for his screenplay for the animated movie The Halloween Tree (1993, based on his 1972 novel), a Medal for Distinguished Contribution to American Letters Award from the National Book Foundation, a French Commandeur Ordre des Arts et des Lettres medal, and a special citation from The Pulitzer Board for his "distinguished, prolific, and deeply influential career as an unmatched author of science fiction and fantasy."

Bradbury was also the recipient of the National Medal of Arts, presented by President George W. Bush and Laura Bush in 2004. 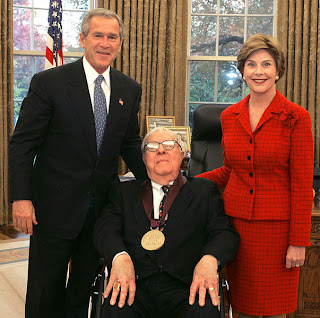 As with most well-known writers, first editions and special printings of Bradbury’s more popular books command big bucks in the collector’s market. AbeBooks.com, one of the biggest online retailers of rare and used books, recently published a list of the most expensive items ever sold on their website:

*Fahrenheit 451 hardcover first edition: $4,500
*World Science Fiction Convention booklet from 1946: $3,500
*Small press chapbook called Sun and Shadow, of which only 90 copies were printed: $2,850
*Signed first edition hardcover of Something Wicked This Way Comes: $2,772
*Complete 71-issue run of Planet Stories, one of the short story magazines Bradbury frequently contributed to: $2,250
*Association copy of The Golden Apples of the Sun, inscribed by Bradbury to A. E. Van Vogt: $2,250
*Full leather lettered edition of The Illustrated Man, of which only 52 copies were printed: $2,000
*Pair of World Science Fiction Convention souvenir booklets from 1939, one of which contains Bradbury’s autograph: $1,750
*Dark Carnival first edition: $1,750
*First edition, first state copy of The Martian Chronicles: $1,400
*First edition copy of The Silver Locusts, which was a British publisher’s renaming of The Martian Chronicles: $1,294
*The October Country first edition: $1,250
* “Ylla,” which is a unique, 16-page manuscript for what later became a short story, and then a chapter in The Martian Chronicles: $1,000
* How Not to Burn a Book—or 1984 Will Not Arrive, which is a limited edition 2002 reprinting of a 1975 lecture Bradbury gave at the University of California at Santa Barbara: $750
*The Vintage Bradbury hardbound cloth edition: $750.

Fahrenheit 451, which is named for the temperature at which paper spontaneously catches fire and burns, is easily Bradbury’s most famous, most influential work. A novel that noted SF author Brian Aldiss once called “a hymn against anti-intellectualism,” it tells the tale of Guy Montag, a fireman of the future whose government-sponsored job it is to burn books, which are illegal to read. He enjoys his occupation until he meets his new neighbor, 17-year-old Clarisse McClellan, who “told him of a past when people were not afraid,” and a professor, who “told him of a future in which people could think.”

Often read as an anti-censorship polemic, Fahrenheit 451 is also a cautionary tale about living in a world in which watching television subverts the desire to read literature and people with short attention spans gather information in bite-sized chunks devoid of context. The book is highly prophetic in nature, predicting such modern day devices as automated banking machines, wall-sized flat screen TVs, and ear buds and Bluetooth headsets (in the form of characters wearing “seashells” and “thimble radios”).

In a 2005 interview with Dana Gioia, former Chairman of the National Endowment for the Arts, Bradbury provided some behind-the-scenes info on the creation of Fahrenheit 451:

Dana Gioia: How did you come to write Fahrenheit 451?

Ray Bradbury: In 1950, our [Bradbury and his wife, Marguerite McClure] first baby was born, and in 1951, our second, so our house was getting full of children. It was very loud, it was very wonderful, but I had no money to rent an office. I was wandering around the UCLA library and discovered there was a typing room where you could rent a typewriter for ten cents a half-hour. So I went and got a bag of dimes. The novel began that day, and nine days later it was finished. But my God, what a place to write that book! I ran up and down stairs and grabbed books off the shelf to find any kind of quote and ran back down and put it in the novel. The book wrote itself in nine days, because the library told me to do it.

DG: What was the origin of the idea of books being burned in the novel?

Published by Ballantine, Fahrenheit 451 was originally released in paperback in 1953. This first edition is worth around $400. More desirable with most collectors is the hardcover first edition (referenced in the list above), which was released around six weeks after the softcover edition. Even more prized is the signed, limited, asbestos bound edition, which sells for a whopping $20,000—only 200 copies were printed. Still rarer is a special cloth and gilt presentation copy that Bradbury had specially bound; only 50 copies were printed, and it’s worth at least as much as the asbestos edition.

In November of last year, Bradbury, a romantic nostalgia buff who despised the notion of virtual books (he said they "smelled like burned fuel"), relented to having Fahrenheit 451 published as an e-book. It was simply impossible to get a new contract for the book without electronic rights.

It’s always sad when a man of Bradbury’s stature and cultural impact dies, but he lived a good, long life, and, by all accounts, he was a jovial, joyful man, gaining immeasurable pleasure from friends, family, books, movies, and, of course, writing.

I’ll leave you with this passage from Fahrenheit 451:

Everyone must leave something behind when he dies, my grandfather said. A child or a book or a painting or a house or a wall built or a pair of shoes made. Or a garden planted. Something your hand touched some way so your soul has somewhere to go when you die, and when people look at that tree or that flower you planted, you're there.

Clearly, Bradbury left behind many, many “somethings.”