ARLINGON, TX—Back in 2010, two comic book enthusiasts living in North Texas had a conversation about the lack of small, frequent conventions in the Dallas/Fort Worth area. The brainstorming session led to the North Texas Comic Book Shows, a quarterly mini-con held in Arlington (home of the Dallas Cowboys and Texas Rangers), which is centrally located between Dallas and Fort Worth.

In addition to having comics-related memorabilia for sale, the show will offer prize drawings. To receive an extra ticket for a chance at a prize, simply bring in a non-perishable food item, the accumulation of which will benefit area food banks.

Past North Texas Comic Book Shows have featured local creators (such as Marvel Comics artist Sam de la Rosa), and the forthcoming show is no different. The special guest this time around is Jason Adams, a trading card artist who has done comic book and Star Wars work for such companies as Topps and Upper Deck.

Living in the shadow of the glitzy Dallas Comic-Con and Fan Days, which are big-time conventions in the area that boast household-name-celebrities and thousands of attendees, the North Texas Comic Book Shows is a small fish in a big pond, and this is perfectly fine with show organizer Chris Latshaw. He wants his labor of love to prosper, of course, but at the same time he hopes to maintain the vibe of a small, intimate, one-day affair. “I think the show will grow,” he said, “but our intent is to keep it a grassroots type of convention and not get too out of hand.” 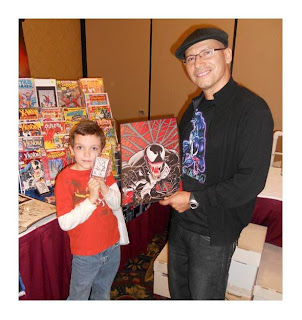 Venom artist Sam de la Rosa, shown here with the winner of a signed piece of art, was a guest at a previous edition of the North Texas Comic Book Shows.
Posted by Brett at 1:02 PM