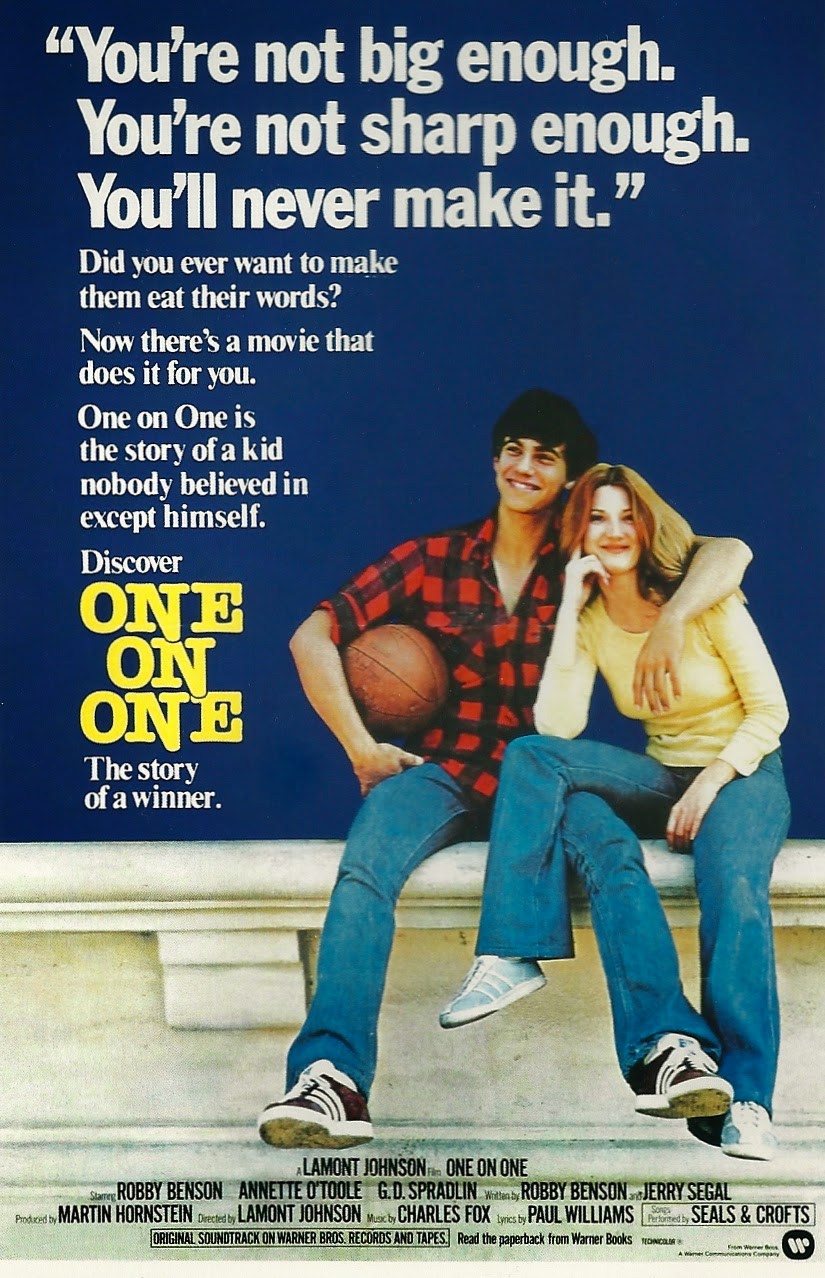 Are you ravenous for roundball? Bonkers for brackets? March Madness is upon us, and if you have a hankering for hoops like I do, you’ll want to gear up for the big tournament by watching one or more of the following films.

You can’t help feeling sorry for Henry Steele, a high school basketball star who gets a college scholarship, only to find himself bullied by his bigger, better teammates and belittled by his overbearing coach. Robby Benson plays the role with a great deal of sincerity, drawing the viewer in with his naïve charm, unwavering persistence and warm, trusting eyes. Annette O'Toole plays Janet Hays, a tutor assigned to help Steele, but the pair become much more than teacher and pupil.

Unlike many roundball movies, the basketball scenes in One on One have an authentic look and feel. Some of the dialogue has aged a bit, but the film as a whole holds up nicely as viewers root for Steele to get the girl and win the game.

Released during the last season of Welcome Back Kotter, Fast Break was Gabe Kaplan’s silver screen debut. Instead of Sweathogs, Kaplan, in the Mr. Kotter-like role of coach David Greene, rides herd on a band of misfit basketball players, including numbers-runner D.C. (Harold Sylvester), androgynous female Swish (Mavis Washington) and former high school star Preacher (Michael Warren), who has impregnated the underage daughter of a cult leader. Then-current NBA star Bernard King is Greene’s pal Hustler, who’s as good at pool as he is at hoops.

A popcorn comedy dotted with dramatic moments, Fast Break sticks to the tried and true formula of so many sports movies—oddball team overcomes great odds to beat superior squad—but it’s good for some guilty laughs.

The Fish that Saved Pittsburgh stars NBA legend Julius “Dr. J” Erving as Moses Guthrie, a member of the fictional Pittsburgh Pythons, an awful team in the midst of an embarrassing losing streak. As such, astrologer Mona Mondieu (Stockard Channing) suggests they populate the team with people, like Guthrie, who were born under the astrological sign of Pisces. One of these players is the Reverend Grady Jackson, played by noted Harlem Globetrotter Meadowlark Lemon.

With its cult following and so-bad-it’s-good reputation, Fish is essentially the Plan 9 from Outer Space of basketball movies. However, thanks to on-court artistry from Erving and Lemon, and to soulful sounds from such acts as the Spinners and the Four Tops, it has more flash and substance than Ed Wood’s anti-masterpiece.

In 1985, Michael J. Fox starred in two hit comedies: a great sci-fi fantasy, Back to the Future, and an entertaining (if slight) horror spoof, Teen Wolf, in which he portrayed Scott Howard, a decent athlete on a terrible basketball team. Like Back to the Future’s Marty McFly, Howard is a likable fellow. However, turning into a werewolf makes him cocky and resented by his teammates.

Inspired by I Was a Teenage Werewolf (1957), Teen Wolf doesn’t quite work as metaphor, at least not in any meaningful way, but it did put a fun new twist on the werewolf genre. Followed by a dreadful sequel, a Saturday morning cartoon and a current MTV television series.

Well-written, well-acted and oozing with heart, Hoosiers stars Gene Hackman as the beleaguered, recently fired (for hitting a player) Norman Dale, who gets a job as a teacher and coach at a small high school in Indiana, a state that is crazy about basketball. Dale takes on recovering alcoholic Shooter (Dennis Hopper in a rare turn as a sympathetic character) as his assistant, much to the chagrin of the townsfolk, who finally come around when Dale’s overachieving teams makes it to the state championship.

Weighing in at #13 on AFI's 100 Years . . . 100 Cheers: America's Most Inspiring Movies (2006), Hoosiers is widely considered the greatest basketball film of all time—a reputation it truly deserves.

Written and directed by Ron Shelton, who directed another quality sports movie in Bull Durham (1988), White Men Can’t Jump initially skirted some controversy with its title—what if there were a movie called “Black Men Can’t Throw?,” some asked—but that is largely forgotten today. What remains is a funny film in which former college standout Bill Hoyle (Woody Harrelson) hustles black street ballers who assume he doesn’t have game because of the pale shade of his skin. One of Hoyle’s victims, Sidney Deane (Wesley Snipes), seizes on the situation and becomes his partner in crime.

While no one will confuse Space Jam with Citizen Kane (or Who Framed Roger Rabbit?, for that matter), it is a likable romp through a Looney world where Saturday morning cartoon characters meet NBA superstars. Michael Jordan helps Bugs Bunny, Daffy Duck and the rest of the gang fend off a group of alien slavers by playing them in a game of high stakes basketball—if the good guys win, they go free.

In addition to featuring such NBA icons as Charles Barkley, Larry Bird and Patrick Ewing (underachieving former Maverick Shawn Bradley is here, too, but we won’t mention that), the film pays homage to an assortment of memorable Looney Tunes moments, such as the Patton parody with Bugs Bunny standing before a giant flag.

Sean Connery is William Forrester, a novelist so reclusive he makes J. D. Salinger look like F. Scott Fitzgerald. The Pulitzer Prize-winning author hasn’t written anything in decades, and he’s as grumpy as a shark getting a root canal. Enter Jamal Wallace (Rob Brown), a 16-year-old basketball standout with a secret ambition to be a writer—he hides his prodigious intellect from his classmates because "basketball is where he gets his acceptance.”

The unlikely duo bond over the written word, and over a common enemy: Robert Crawford (F. Murray Abraham), a professor who doesn’t believe that a young African-American athlete from the Bronx could possibly write with such skill. Finding Forrester was directed by Gus Van Sant, and fans of Van Sant’s Good Will Hunting should enjoy it.

Based on the true story of California high school basketball coach Ken Carter, who made news in 1999 by benching the players on his undefeated team for making bad grades, Coach Carter stars Samuel L. Jackson as the titular task master. He knows that the odds of making the NBA are extremely slim and that a good education and self-respect are more important than athletic prowess. Jackson relays this wisdom with a commanding performance that earned him Outstanding Actor in a Motion Picture at the 2005 ESPY Awards.

In 1966, Texas Western College, coached by Don Haskins, won the NCAA Men's Division I Basketball Tournament, beating the Kentucky Wildcats, who were coached by the legendary Adolph Rupp. The Wildcats had an all-white roster while Haskins fielded five black starters, an NCAA Championship first.

Glory Road is based on this racial breakthrough. In an interview during the film’s end credits, Pat Riley, who starred on that Wildcats team, says Haskins and his squad wrote the “emancipation proclamation of 1966,” which is less hyperbolic than it sounds. Glory Road has a the same plot as a thousand other sports movies—rookie coach leads a reluctant, underdog team to greatness—but it transcends the genre by capably spotlighting an important historical event.
Posted by Brett at 1:59 PM